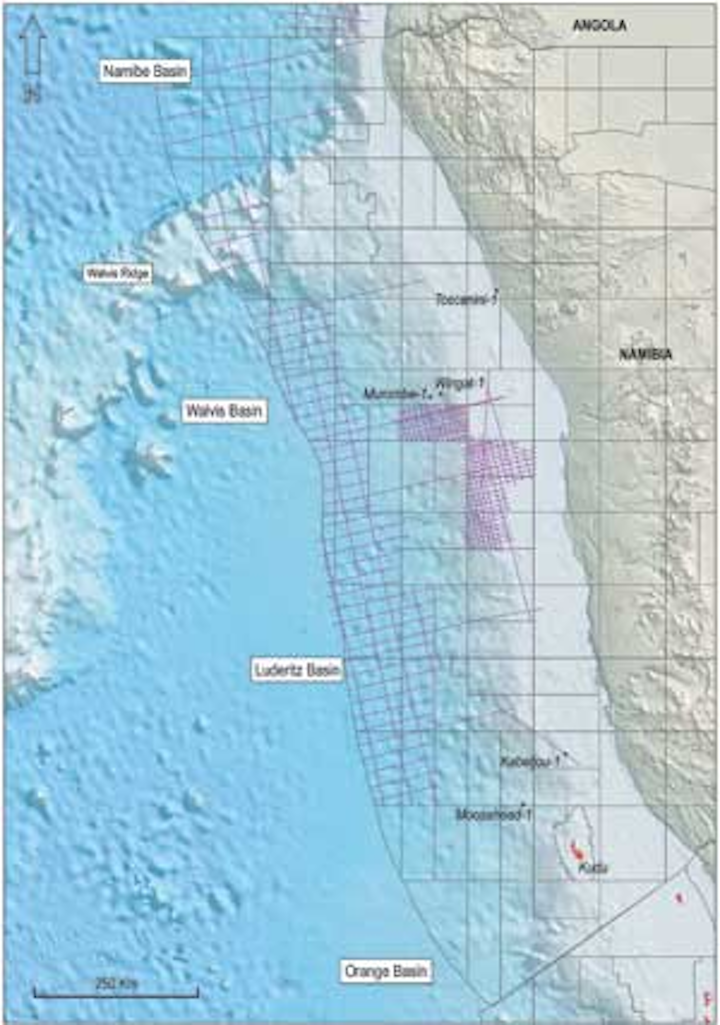 The deepwater basins of Namibia display the necessary elements for hydrocarbon potential. These remaining frontier basins of West Africa have seen demand for a high-quality seismic data set in a regional context to de-risk exploration. Recent wells drilled by Petrobras, HRT, and Chariot highlight the elements for a working petroleum system for the first time, and with more wells and continued seismic acquisition planned for 2014, the area is set to have an exciting future.

To better understand the petroleum systems of offshore Namibia, Petroleum Geo-Services (PGS), in association with NAMCOR, acquired two 2D surveys using the GeoStreamer with GeoSource dual-sensor broadband towed streamer system. One survey in 2012 covered 5,000 line km over blocks 2112B, 2113 A&B, and 2413B. The second survey, in 2013, covered 10,000 line km of regional 2D and focused in deepwater Namibia.

The enhanced image of the subsurface afforded by contemporary broadband seismic data allows for a regional interpretation of the geology and the possible petroleum systems of the area.

The Namibian offshore basins were formed during the Late Jurassic to Early Cretaceous due to the rift and subsequent drift of the South American and African plates. The tectonostratigraphic architecture of offshore Namibia is a classic example of passive margin rifting with clearly defined syn- and post-rift megasequences. In addition to these megasequences, deeply buried pre-rift Permo-Carboniferous to Triassic Karoo aged rocks are clearly visible on the recent seismic. Along the margin, four main basins are delineated, from north to south, these are: the Namibe, Walvis, Luderitz, and Orange.

Syn-rift depositional environments are predominantly terrestrial, ranging from fluvial, lacustrine, and aeolian. Fine- to coarse-grained sandstones and conglomerates were deposited within river systems, with turbidite sequences in anoxic lakes. Lacustrine carbonates, similar to those found along West Africa and on the Brazilian conjugate margin may also be considered; however, these remain untested. Ages for the syn-rift are debated, ranging from Late Jurassic to Early Cretaceous. These syn-rift grabens are widespread across Namibia, and can contain several kilometers of sediment.

In the deepwater region south of the Walvis Ridge, a thick package of Seaward Dipping Reflectors (SDRs) marks the transition between continental and oceanic crust. These SDRs are interpreted as thick, stacked, sub-aerial basalt flows interspersed with non-volcanic sediments deposited toward the end of the syn-rift period. The figure on page 44 shows clear SDRs to the west and the possibility for preserved sub-SDR, syn-rift structure and sediments to the east of the seismic section. Although these SDRs have never been drilled in Namibia, the upper most part of the syn-rift has been penetrated at the Kudu field in the Orange Basin, offshore South Africa, where sediments include sandstones deposited in an aeolian environment, as well as interleaved basalt flows.

As active rifting ceased in the Early Cretaceous, the late syn-rift to early post-rift phase was characterized by the deposition of clastic sediments in continental, fluvial, lagoon, and finally transgressive to deep marine environments. The Early Cretaceous rifting that defines this margin began earlier in the south, with the volcanic Walvis Ridge in northern Namibia forming a major divide during the early rift stage. This divide resulted in restricted conditions north of the ridge during the Aptian, with repeated cycles of marine incursions leading to the development of a thick evaporite sequence. Although this salt is widespread throughout the West African margin, it thins into the Namibe Basin and is absent from Namibia, where open marine conditions prevailed.

Aggrading carbonates were deposited during the Aptian-Albian, followed by a major sequence of progradational clastic infill from the Upper Cretaceous to Tertiary, contributing the largest volume of sediment input into the basin. Basin floor fan and channel systems, clearly identifiable on the seismic, are interpreted to be periods of low sea level during which sediments were able to bypass the shelf and be deposited down slope.

Exploration offshore Namibia is limited. Along a margin covering 670,000 sq km (258,688 sq mi), only 12 wildcat wells were drilled. Over the last few years, a renewed drilling campaign has resulted in a suite of modern seismic and a few dry wells. This information is invaluable in terms of the knowledge gained and provides key insights into a working petroleum system. The wells drilled were the Kabeljou-1 (Petrobras, 2012), and Moosehead-1, Murombe-1, and Wingat-1 (HRT, all 2013).

The activity planned for 2014 includes Repsol/Tower Resources' Welwitschia-1 wildcat, planned for the first half of 2014 in northern Namibia, which will target Upper Cretaceous to early Tertiary sands and the deeper Albian carbonate horizon with net risked prospective resources quoted at 496 MMboe.

The oldest known source rocks in Namibia are Karoo aged coals and carbonaceous shales, found in the coastal Toscanini-1 in 1972. In the offshore area, the prevalence of this source rock remains unknown. The oldest proven source rock tested by offshore wells is in Kudu field and is believed to be lacustrine syn-rift in origin, equivalent to the prolific Bucomazi shales.

In the Aptian post-rift section, marine shales interpreted to be deposited as part of Oceanic Anoxic Event (OAE) 1a were encountered in Kabeljou-1, Wingat-1, Murombe-1, and Moosehead-1. In Wingat-1, the interval was apparently oil mature, with small samples of light, 38-42° API oil collected from thin sands below the interval.

Another potential major source rock is the Cenomanian-Turonian marine shales associated with OAE 2. Encountered on the shelf by well 2012/13-1 with total organic carbon content (TOC) of 5%, the shales were thermally immature, but indicated the possibility that where sufficiently buried, they could generate hydrocarbons.

Migration efficiency is another factor that must be considered when risking the margins.

Early Cretaceous late syn-rift reservoirs have been proven by the Kudu field. Interestingly, the original reservoir target for this field was in the Upper Cretaceous post-rift. However, poor reservoir results in the post-rift led to Chevron drilling deeper into the syn-rift. The reservoir at Kudu is complex, with development hampered by high pressures plus porosity and permeability reduction.

Reservoir lithology is Neocomian aeolian sandstones, with porosity and permeability values reaching up to 20% and 767 mD, respectively, and preservation at depth due to early calcite cementation and secondary porosity generation due to leaching.

Aptian carbonates are proven in Namibia by recent drilling. However, good-quality reservoir has proven difficult to find. A more detailed picture of facies distribution will begin to unfold, allowing more targeting of good-quality carbonate reservoirs.

The final, and perhaps most promising reservoirs, are the Late Cretaceous turbidite channel and fan systems with up-dip stratigraphic and structural traps. The secondary target of Murombe-1 was a Santonian age channel complex and although water-wet, the 36 m (118 ft) of net sand within a 242 m (792 ft) interval had an average porosity of 15%.

An adequate seal is perhaps the final piece missing in the Namibian jigsaw puzzle. Many of the wells drilled offshore Namibia have had good evidence of source and reservoir, but have had only hydrocarbon shows. In some shelfal wells, thick clastic sequences have been found with very little shale to act as a seal for the sandstone reservoirs. On the other hand, some wells have encountered the opposite problem: thick shale sequences with little sandstone. There is clearly plenty of shale in the Namibian system, and as exploration is focused offshore and into deeper waters, the presence of shales will be almost guaranteed, and the risk of seal failure will be significantly reduced.

Broadband seismic has improved the imaging of syn-rift and post-rift structures, enabling more confident identification and mapping of prospects. These data clearly demonstrate the presence of thick syn- and post-rift packages and thick sediment in deepwater. The improved imaging and resolution provided by this type of seismic acquisition significantly de-risks exploration in frontier areas, something that is of high importance where well costs are extremely high.