In January 1962, a strange contraption under lease to Shell Oil, called the Blue Water 1, spudded a record-setting offshore well in 297 ft (91 m) of water in the Gulf of Mexico. The maiden voyage of the Blue Water 1 took place a month before NASA astronaut John Glenn became the first person to complete an orbit of the earth. Both missions revealed a newfound human ability to explore frontiers beyond the comfort of terra firma. On Aug. 14, 1962, Shell Oil dramatically disclosed the details of its new "floating drilling platform." 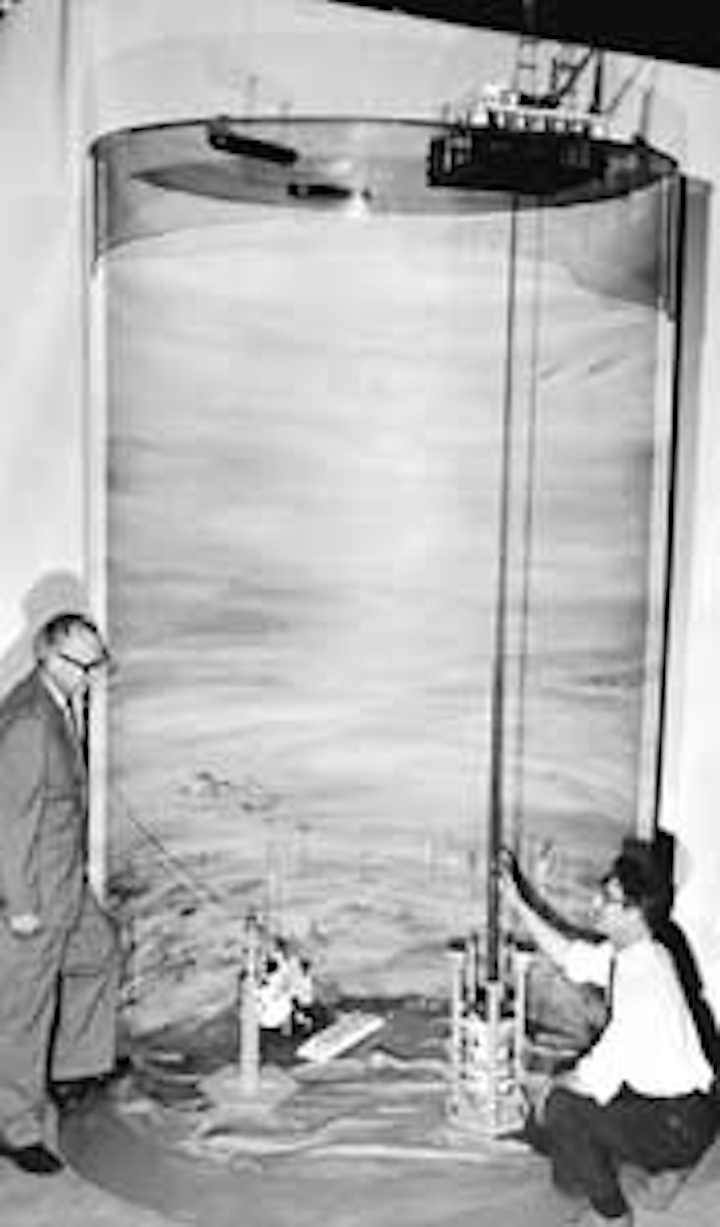 Soon after becoming executive vice president, Clark created a top-secret program to investigate ways to develop a complete system for drilling and producing in water depths ranging out to 600 ft of water. If Shell beat its competitors in finding the technology for deepwater exploration, the company could obtain leases at very reasonable prices for tracts that nobody else was prepared to develop. An inventive and enterprising young naval architect in the program, Bruce Collipp, immediately went to work designing and building scale models of ideas he had for drilling platforms that would float, partially submerged, in the water. These, he believed, would provide greater stability than theCUSS I, the ship-shaped drilling vessel with which Shell and a consortium of other companies (Continental, Union, and Superior) had been experimenting with off California.

Upon publication of the initial Call for Nominations for the 1960 federal lease sale in the Gulf, the head of Shell's New Orleans legal department, George Schoenberger, convinced the Bureau of Land Management (BLM) to withdraw the call and issue a new set of leasing maps with deeper acreage out to and beyond the 300-ft depth contour. With Shell's assistance, the BLM redrew the maps with "south additions" to all the old original blocks off Louisiana and issued a new call for nominations. It was a big sale. Offshore operators spent $285 million in high bids for tracts offshore Texas and Louisiana, more than double the amount spent in any previous sale. Shell Oil acquired a number of tracts in the Grand Isle Area South Addition, where no other company planned to drill.

The head office ordered up a floating drilling platform to evaluate its new deepwater leases. Time was short, however. The exploration managers wanted to drill and obtain information on these leases before the next scheduled lease sale in March 1962, which was going to be even bigger than the last.

Building a new rig from scratch based on Collipp's experimental designs would take too long and cost too much. Fortunately, Collipp knew of an existing unit that could be converted into a floating platform. It was theBlue Water 1, a three-year-old, bottom-sitting, submersible owned by a consortium of four small producing companies called the Blue Water Drilling Corp. With four stabilizing columns resembling monstrous milk bottles, the Blue Water 1 had the desired hydrodynamic properties. The hull pontoons could be filled partway, making them buoyant enough to keep the vessel afloat but heavy enough to sink below the lash of the waves.

Collipp offered to lease the unit from Blue Water Drilling for five years, under the conditions that Shell could make changes to it and that Blue Water had to keep those changes strictly secret. Blue Water's president, Sam Lloyd, readily agreed. TheBlue Water 1 had been idle for about six months, and a five-year contract in those days was unheard of. "Do whatever you want with it," Lloyd told Collipp. "Paint it red and yellow if you have to."

As the conversion neared completion, Collipp met with a US Coast Guard official, Captain McPhall, in Mobile, Alabama, to have the rig certified. But there were no classification guidelines for something like theBlue Water 1. Ships were supposed to be long and pointy and go from point A to point B. But this vessel was roughly square, did not transport cargo, and did not transport people. Therefore, it was not a ship.

When McPhall unrolled the blueprints, he asked Collipp, "What is it?"

"It's like an iceberg," Collipp explained. "You see, all the hulls are underwater."

"I don't know what you are describing to me," replied the captain, "but this thing is going to sink if all the hulls are underwater."

"Well, no," said Collipp, trying his best to describe in simple terms how the vessel would remain afloat. After more discussion, McPhall agreed to register the rig, but he needed to know how to classify it.

"It is kind of a semi-submerged thing," Collipp told him. The term just popped into his head.

"All right," said the captain. "We will list it as a Super Manned Barge-Semi-submersible."

The name stuck, and Collipp would henceforth be known as the "father of the semisubmersible."

The semisubmersible vessel itself was only one piece of the deepwater puzzle, albeit the major one. Other fertile minds recruited into Shell's deepwater program attacked the problem of how the oil would be drilled and produced. The effort began in 1955 with the offshore task force set up at Shell Oil's Bellaire Research Center (BRC) to study the whole field of offshore operations. By 1958, the special development program for the Gulf of Mexico had come to focus on floating drilling and underwater wellhead completion.

The semisubmersible increased the depth of exploratory drilling, but new methods would be needed to produce oil from those depths. In conventional offshore producing operations, the deck of a fixed platform housed the wellhead equipment—the blowout preventer and the assemblage of control valves, pressure gauges, and chokes known as the "Christmas tree"—above the water surface. A conductor connected all this equipment to the bottom. Because platform designs had not even approached the water depths (300 to 600 ft) contemplated by the deepwater program, Shell engineers investigated the possibility of installing, completing, and maintaining a wellhead on the seafloor. Because the practical limit of diving at the time was only about 150 ft, everything had to be done by remote control. Like the semi-submersible, an underwater well represented a giant conceptual leap. But, as Ron Geer, a mechanical engineer who directed the design of the wellhead system, remembered: "We were limited only by our imaginations."

In 1958, Geer joined about a dozen other young engineers, some fresh out of college, at the Shell BRC in Houston to develop the underwater completion technology that would accompany floating drilling in the Gulf. What he and others ultimately created was complex, consisting of many specialized subsystems and components. Frank Poorman was responsible for the special blowout preventers. John Haeber helped put all this together with the wellhead suspension system. Lloyd Otteman and John Lacey designed the structure for guiding all the various components into alignment. Ed Lagucki devised an innovative "through-the-flowline" system of maintaining well production. Bill Foster came up with the instrumentation, and Ray Perner handled dimension control. Bob Carter, Keith Doig, and Art Williams were the overall project managers at BRC during the system and equipment development phase. The engineers invented many kinds of patented tools and equipment for the project.