Asian shipyards expanding to meet vessel demand for the next decade 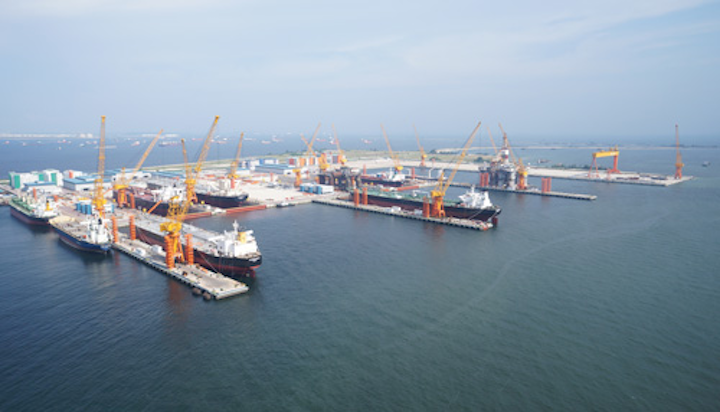 Globally, the pace of deepwater drilling activity is expected to slow down slightly in the next 18 to 24 months, thanks to project delays and cost savings measures among operators. And while this has created a slight overcapacity of deepwater drilling rigs in the market, this does not mean that shipyards are stagnant.

On the contrary, many yards in the Asia/Pacific region are staying quite busy in anticipation of the upswing in exploratory drilling in late 2016 and beyond. What follows is a brief review of some of the expansion activity taking place in countries like Singapore, South Korea, and China, whose yards must keep growing to keep pace with the demand for larger, heavier, and higher-capacity drilling vessels.

Yard expansions are a high priority for several marine fabricators in Singapore, including Sembcorp Marine Ltd. The company was an early tenant in the country's new industrial area known as the Tuas View Extension, located on Singapore's west coast and built on reclaimed land. The company's Sembmarine Integrated Yard @ Tuas will cover 509 acres and be developed in three phases.

The 181-acre Phase 1 has been operational since August 2013, and is designed to serve a range of vessels and rigs, including LNG carriers. Phase 1 includes the longest and deepest ship repair dry dock in Asia, measuring in at 1,352 ft (412 m) long, 217 ft (66 m) wide, and with a draft of 36 ft (11 m). Its size, and the fact that it is reinforced to 20,000 metric tons, makes it particularly well suited for storing topsides modules and then skidding them out to quayside.

The yard is also configured with three finger piers and a basin ranging from 201 to 400 m (659 to 1,312 ft) with maximum draft of 9-15 m (30-49 ft), allowing for ultra-deepwater semisubmersible rigs and passenger vessels to be berthed without restrictions.

The 85-acre Phase 2 is currently under construction, and will have a 110-m (361-ft) wide dry dock. When complete (in the next 2.5 to 3.5 years), it will be one of the largest dry docks in the world. Phase 2 will also include a state-of-the-art robotic painting facility for equipment, which will provide better control while painting with fewer emissions into the yard. This feature is in line with Sembmarine's goal of running an environmentally sustainable facility; even the electricity for the lights around the docks is supplied by wave-action generators.

Phase 3 is further out on the calendar and still in the planning stages. But, there are hints that this phase will include a lifting facility, allowing for integration quayside.

Once complete, the Sembmarine Yard will be Singapore's first truly integrated yard, capable of performing newbuilds, conversions, repairs, and upgrades on a variety of vessels. The first tenant for the yard is Jurong Shipyard, a Sembcorp Marine subsidiary. As the yard expands, other Sembcorp subsidiaries, including SMOE, PPL, and Sembawang, will move into the yard.

The Sembmarine Yard was designed to compete with shipyards in South Korea, currently the world's largest provider of floating production unit construction and refab services, for the first time.

Drilling contractors are rewarding Sembcorp Marine for its yard expansion efforts with new contracts. Earlier this year, Transocean awarded contracts worth roughly $1.24 billion to Jurong Shipyard for construction of two new ultra-deepwater drillships capable of drilling in water depths up to 12,000 ft (3,658 m). Delivery is scheduled for 2Q 2017 and 1Q 2018. In May 2014, Jurong secured a $236-million contract to build a high-specification Friede & Goldman JU 2000E model jackup rig for Hercules North Sea Ltd.

These contracts contribute to Sembcorp's tally for new orders secured in 2014 through June to $1.54 billion. As of this writing, the group's net order book stands at $10.6 billion, with deliveries extending into 2019.

Not to be outdone, Singapore's Keppel FELS is making strides with new technical achievements, particularly in jackup rigs. The company received nine KFELS B Class jackup orders in the first six months of 2013, and delivered its first KFELS Super A Class jackup for an operator in the UK sector of the North Sea. In April 2014, Keppel FELS entered into an engineering study with the Seafox Group for a purpose-built accommodation jackup rig with well intervention and P&A features, one of the industry's first jackups of this kind.

China's offshore and marine industry is poised for significant growth in the next few years, as the country strives to reverse its dependence on oil and gas imports. By 2012, imports accounted for 56% of China's oil and gas usage, and are likely to hit 60% before the end of this decade. And in its 12th five-year plan, the Chinese government announced plans to more than double its investment in offshore E&P to $48 billion, up from $19 billion in its 11th five-year plan.

Recognizing this potential for continued growth in China's offshore oil and gas market, Keppel Offshore & Marine (O&M) signed a management services agreement in April 2014 to manage Titan Quanzhou Shipyard Co.'s TQ5 shipyard. Located in Quanzhou, Fujian province, TQ5 is still under construction but is shaping up to be one of China's largest yards. Once complete, the shipyard will occupy a total area of 110 hectares (272 acres) along 3,600 m (11,800 ft) of coastline and will have four ultra-large and wide dry docks, including one that will be 80 m (263 ft) wide. This will enable it to undertake double-hull vessel projects such as FPSO conversions. In addition, the yard will be equipped to take on repair and construction jobs for jackups and semisubmersibles.

Under the management agreement, which is for a 30-year period and includes an option for renewal, Keppel O&M will undertake projects using its proprietary designs. This agreement fits in with Keppel O&M's "Near Market, Near Customer" strategy of managing and optimizing the operations of shipyards in Brazil, the Netherlands, the US, and the Philippines to serve projects in those regions.

This is just one of the latest examples of how Chinese shipyards are strengthening their capabilities by entering into long-term alliances with foreign companies. Another example is the partnership between COSCO and Sembcorp Marine that was signed in July 2004.

This mutually beneficial transaction not only allowed Sembcorp Marine to enlarge its footprint in China, but also it helped COSCO build its competency in FPSO conversions. As a result, COSCO has secured several FPSO construction contracts in recent years, such as the $370-million contract to build an FPSO with a storage capacity of 400,000 bbl of oil. The FPSO, which will go to a European company, is scheduled for delivery in June 2015.

The shipyards of South Korea traditionally have been the global center of manufacturing for FPUs. And the bigger shipyards in the country – Hyundai Heavy Industries and Samsung Heavy Industries in particular – are aiming to hold on to that position by securing long-term newbuild orders and building larger and more technically complex vessels.

In advance of the resurgence in drilling activity in the US Gulf of Mexico, Hyundai Heavy Industries is supplying two new ultra-deepwater drillships, theNoble Tom Madden and the recently completed Rowan Renaissance, which are both scheduled to begin work in 2015.

The expansion efforts of these and other Asian shipyards suggest that if the demand for ultra-deepwater rigs truly does pick up in the next two years, a newer, larger, and more technically complex fleet of vessels will be ready.