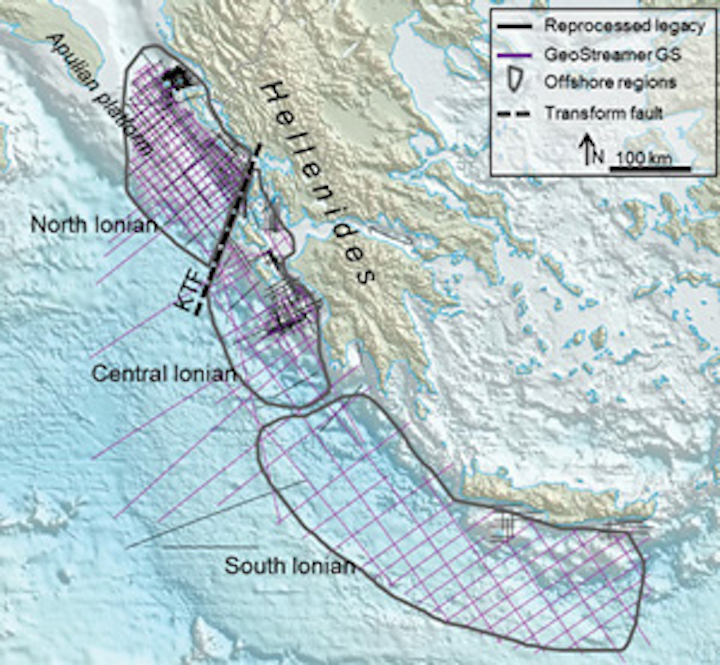 Exploration in Greece is gaining momentum. After the 2012 open-door tender process and last year's awards in the three bid areas of western Greece (Ioannina, Gulf of Patraikos, and Katakolon), the Greek Ministry of Environment, Energy, and Climate Change (YPEKA) is expected to announce an international licensing round for hydrocarbon exploration and development, starting in September 2014. In preparation for this, an international invitation for a non-exclusive regional 2D seismic survey offshore western and southern Greece was made. This work was awarded to PGS, and the data was shot using GeoStreamer with GeoSource, producing 12,500 line km (7,767 mi) of data. The data is processed and available for licensing.

GeoStreamer with GeoSource is PGS' ghost-free broadband solution, which provides the interpreter with a clearer image of the subsurface. Offshore Greece, this is particularly crucial when imaging the prospective Mesozoic carbonate succession, allowing greater depth penetration and imaging of the structures deeper in the section than previously possible, while resolving structural details of the shallow clastic intervals. The combination of this new seismic dataset with the reprocessed legacy data allows a confident evaluation of the complex interplay and dynamics of evaporites, carbonates, and clastics, from foreland settings in western Greece to the fore-arc region south of Crete.

Exploration offshore western Greece has been stagnant over the past decade, with the last seismic survey acquired in 2000 and the last offshore well drilled in the 1980s. However, interest is growing again. No major discovery has been made, but two-thirds of the wells drilled offshore have shown traces of hydrocarbons, and seeps are abundant onshore Zakynthos and Peloponnese.

Neighboring Italy and Albania are petroliferous regions. On the Italian side, several discoveries (e.g. Falco, Giove, and Rovesti) have been made on the eastern slope of the Apulian platform and on the platform itself. This trend is understood to extend into the North Ionian region. Similarly, the Ionian zone in Greece – a geotectonic zone related to the Hellenides – extends northwards into Albania, which contains the largest onshore oilfield in Europe, the Patos-Marinza field. The main source rocks in both areas are of Triassic age and presumably equivalent to the Burano formation, also found onshore Greece.

The offshore region of western Greece is on the western rim of the Hellenides, a west/southwest moving fold-and-thrust belt developed since the Late Cretaceous as a result of convergence and collision between the Eurasian and African plates. It is the eastern end of the Peri-Adriatic orogenic belt extending from the Maghrebides in Tunisia. The geotectonic zones originated when the southern Tethys margin underwent rifting during the late Mesozoic, creating a platform (i.e. Apulian platform) and basin (i.e. Ionian zone) configuration, where the present day Paxi zone was the transitional slope from platform to basin. The offshore western Greece region covers the un-deformed Apulian platform and the external Hellenides, which includes the outermost Ionian and Paxi (or Pre-Apulian) geotectonic zones. As the convergence continued, the Hellenides started growing from east to west, with thrusts' age getting progressively younger toward the west/southwest, and emplacing the zones onto the stable Apulian platform.

With the onset of convergence, the newly active Pindos thrust in the east created a foreland basin along its western edge. The Ionian zone was affected by the flysch deposits coming into the foreland from latest Eocene times and onwards, thus stopping the carbonate production. The Apulian platform was too distal relative to the thrust front and was not influenced by clastic input, therefore carbonate production continued until the Messinian. With the re-flooding of the Mediterranean Sea after the Messinian salinity crisis, the Apulian platform was drowned and the dominant sedimentation east of the platform since then has been hemipelagic sediments and clastic input from the erosion of the younger Ionian thrusted rocks in the east.

The PGS data available for the licensing round includes the 12,500 line km of new 2D fully deghosted broadband seismic and gravity-magnetic data taken offshore western and southern Greece. Additionally, 9,000 line km (5,592 mi) of reprocessed legacy seismic data have been made available, together with a select number of wells.

A broader view on the geology

The offshore Greece area contains a variety of sedimentary environments. The basins involved are associated with a series of different structural settings, ranging from the fore-arc succession south of Crete, to the outermost part of the fold-and-thrust belt of the External Hellenides in western Greece and the corresponding forelands, being underlain by the westwards overthrusted Apulian platform. As such, the region is structurally challenging – being influenced by the Hellenides, the Central Hellenic shear zone, and its corresponding strike slip faults such as the Kefalonia transform fault (KTF) – creating both compressional and extensional structures, which are often closely related time-wise. The right-lateral KTF separates the area into a North Ionian region covering the Apulian platform and Paxi zone, and a Central Ionian region covering the Ionian and Paxi zones, moving the Ionian zone onshore north of the fault. Carbonate deposition dominates the region up to the Eocene/Oligocene in the Ionian zone, and up to Messinian times on the Apulian platform, causing a large amount of the seismic energy to be lost at the clastic/carbonate interface. Furthermore, Triassic salt in the Ionian zone is mobilized along thrust faults folding the adjacent strata. With the sparse well data available, interpretation relies heavily on the seismic data, making quality imaging crucial.

The Apulian platform is dominated by carbonate deposition up until the Messinian, a period when the Mediterranean was exposed to extreme changes in sea-level. The resulting top carbonate reflector is extremely strong, both on the platform and in basinal areas. Results show two seismic lines from the eastern edge of the Apulian platform, illustrating a common structural feature along the platform slope, demonstrating the benefit of broadband seismic versus reprocessed legacy data. The new seismic data provides crisper imaging of fault planes in this zone. The faulting is most likely caused by the flexure of the platform due to the influence of an east and a west-verging fold-and-thrust belt, the Apennines and the Hellenides, respectively. The younger clastic interval is sourced from the erosion of sediments as a result of the growing Ionian thrust in the east, creating a young foreland along its western edge.

One aim when acquiring the new dataset was to image deeper targets than previously possible, such as the Permian-Triassic shelf clastics, remnants of the African plate. This succeeded, showing a prominent deeper black reflector (peak – decrease in AI) marking the base of the carbonate succession and onset of what is inferred to be the older clastic sequence.

Moving off the platform eastwards, further into the Paxi zone and then into the Ionian zone, the structures related to the prograding Hellenides fold-and-thrust belt become more prominent. Results show a clearly imaged fault-related anticline located along the same northwest/southeast trend as Paxos Island, where along its northeastern edge, several related thrusts and synclines are shown. Improving the imaging of the anticlines facilitates the interpretation and identification of potential sub-thrust targets. These have proven to be an important trap type in Albanian fields.

Offshore Peloponnese, south of the KTF, the structural picture becomes more complex with the onset of the salt-influenced, thrust-affected Ionian zone. The new seismic data allows for delineation of the complex fault patterns. The Triassic evaporites are mobilized and flow along the major thrust and faults associated with the progradation of the fold-and-thrust belt. Shallow salt structures often associated with back-thrusts are created as a result. Located eastwards, the Ionian zone was affected at an earlier stage than the Apulian platform, by the Hellenides thrusting. The Ionian zone was part of the Pindos Foreland, where the clastic input from the prograding thrust front in the east led to a cessation in the carbonate production. This Oligocene flysch is seen to be, locally, both conformable with and onlapping the Eocene and older carbonates. The onset of movement of the Triassic salt along the thrust faults affected this flysch, creating upturned layers and possible traps adjacent to the thrusts.

The southern Ionian region covers the fore-arc region of Crete, with a geological setting differing from the Northern and Central Ionian regions. The area is largely influenced by overall subduction of the African plate, with several strike slip faults creating pull-apart basins and push-up structures. This area remains a frontier, largely due to the water depths.