In June, Total lifted first oil from CLOV, its fourth deepwater development "pole" in block 17 offshore Angola. Like its predecessors Girassol, Dalia and Pazflor, CLOV routes production through a network of subsea flowlines to a spread-moored FPSO. 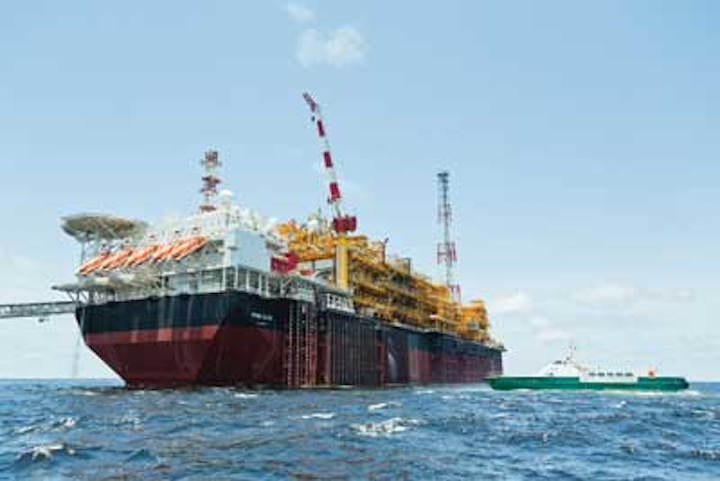 In June, Total lifted first oil from CLOV, its fourth deepwater development "pole" in block 17 offshore Angola. Like its predecessors Girassol, Dalia and Pazflor, CLOV routes production through a network of subsea flowlines to a spread-moored FPSO. Total took onboard experiences from these earlier projects to address certain issues, notably the treatment of two different types of crude. But CLOV also features innovations designed to improve recovery and operational efficiency, as well as raising the bar in terms of local construction content.

The development takes in the Cravo, Lirio, Orquidea, and Violeta fields, with proven and probable oil reserves of 505 MMbbl. The fields cover 381 sq km (147 sq mi) in water depths of 1,100-1,400 m (3,609-4,593 ft), 140 km (87 mi) from Luanda, and 40 km (25 mi) northwest of the Dalia hub. Reservoir conditions vary, with different temperatures, pressures, and oil qualities. The Oligocene Cravo and Lirio reservoirs produce 32-35°API crude which quality-wise is one of the best in block 17. Orquidea and Violeta's Miocene produces 20-30° API oil, which is more permeable and viscous.

Development drilling started in 2012. Total and its partners Statoil, ExxonMobil, and BP plan to tie a total of 34 wells back to the FPSO, which has oil processing capacity of 160,000 b/d, storage for up to 1.8 MMbbl, and gas handling capacity of 230 MMcf/d (6.5 MMcm/d). Engineering, procurement, and construction contractor Daewoo Shipbuilding & Marine Engineering (DSME) cut first steel in July 2011 and completed the vessel two years later. Construction required supply of about 88,000 steel plates, supplied by POSCO.

KBR performed detailed engineering and design of the topsides in collaboration with DSME.

The vessel is designed to process and store the different types of crude simultaneously, while its hull incorporates tanks to separate the produced oil from water. DSME contracted VWS Westgarth to design and supply ultra-filtration equipment with a capacity of 66,208 cu m/d (2.34 MMcf/d), and a sulfate removal package with treatment capacity of 59,496 cu m/d (2.1 MMcf/d). Grenland Group provided the vessel's Minox deoxygenating system which can treat up to 280,000 b/d of water used for injection, while Sulzer engineered the electric motors for the water injection pumps.

This is Total's second all-electric FPSO and its first to be equipped with variable-speed drive (VSD) systems to help control energy consumption. The configuration is designed to maximize energy efficiency by generating only the quantity of electricity needed to operate the facilities. Under a $113-million contract, GE supplied four LM2500+ G4 SAC aero-derivative gas turbines for power generation and five gas compressors, while GE subsidiary Converteam manufactured five VSD systems, including induction motors, for the compressors. During normal operations there is no flaring, with recovery of heat from the turbine exhausts and of vent gases.

CLOV's processed crude is transferred regularly to tankers via two 2-km (1.2-mi) long reinforced rubber oil offloading lines (OOLs) connected to an offshore loading buoy. Total claims that the wider than normal diameter of the OOLs (24-in.) allows the crude to be transferred directly in the allotted transfer time, dispensing with the normal booster pumps. According to Cyril de Coatpont, in charge of CLOV's subsea pipeline/oil offloading systems, the pipes, which are designed for a service life of up to 20 years, can cope with pressures up to 30 bar (435 psi). "They have to be reinforced to be able to withstand the water 'hammers' that can accidentally occur during offloading operations." To meet these specifications, OOL designer and manufacturer Trelleborg in France tightened the manufacturing procedures, increasing the number of crossed metal frames between the various layers of rubber that make up the pipes.

CLOV's produced gas is exported via a subsea pipeline to the onshore Angola LNG plant.

FMC Technologies manufactured the subsea production equipment under a $520-million contract. This comprises 36 EVXT 10,000-psi (689-bar) subsea tree/wellhead systems with a tree bore size of 51⁄8-in. x 21⁄16-in., and seven manifold systems. Aker Solutions, in collaboration with Framo Engineering, supplied a 10.6-km (6.5-mi) multi-phase power and control umbilical that provides system functions for the two Framo-engineered multi-phase pump station (comprising two pumps, one for standby duty only), installed on the seafloor in a water depth of 1,170 m (3,838 ft). The pumping system will be used to increase pressure in wells extracting the more viscous oil from the Orquidea and Violeta fields, allowing production levels to be maintained after three years of operations as reservoir pressure declines.

The multi-phase, helico-axial system accommodates a mixture of oil, gas, and water at high speeds. According to CLOV's deputy director Francois Bichon, this is the first time Total has adopted such a solution, and the company plans to add two four-pump modules for its GiRI (Girassol expansion) project.

Technip subsidiaries DUCO and Angoflex supplied 47 mi (76 km) of dynamic and static production and water injection umbilicals, all manufactured at the Angoflex complex in Lobito, Angola. The other main subsea contract, valued at $1.3 billion, went to Subsea 7, which was responsible for engineering, procurement, fabrication, and installation of 132 km (82 mi) of pipes. These comprised 40 km (25 mi) of pipe-in-pipe production lines, 60 km (37 mi) of water injection lines, and 32 km (19.9 mi) of gas export lines; two hybrid riser towers (a system first introduced for the Girassol project), one for each production loop; and one hybrid riser at the end of the gas export line. Subsea 7 also installed a total of 80 km (49.7 mi) of umbilicals, 37 subsea spools, 15 jumpers, and the manifolds and subsea pumps. Vessels employed from the company's fleet includedSeven Borealis, Seven Eagle, Acergy Legend, and Rockwater 2. The company's specialist yard in Lobito manufactured the hybrid riser towers.

Total commissioned Bureau Veritas (BV) to perform class/certification duties for the entire CLOV project. These included project management, design review, construction survey, installation of the anchors and mooring lines, the FPSO and offloading buoy, hookup of the FPSO, the 75-day, 18,520-km (11,508-mi) tow of the vessel from South Korea to Porto Amboim, Angola, during September-November 2013 (performed by the Fairstar semisubmersible vesselFjord), and commissioning/certification of the subsea umbilical, risers, and flowlines package, along with second-party equipment inspections.

BV's consultancy division Tecnitas was responsible for structural integrity management of the FPSO. Its tasks included compiling a complete record of the construction detailing all non-conformities and preparing a full finite element model of the hull and topsides in as-is condition on delivery to Total. This model will form the basis of an ongoing risk-based inspection program and an asset integrity maintenance scheme provide by Bureau Veritas, using VeriSTAR HLC software for tasks including inspection of relevant structural areas; assessing the corrosion condition of the FPSO against BV or user-defined criteria; and managing the data on the structure and topsides over the long term in an open format.

On arrival at Porto Amboim, the vessel was fitted with hull and riser protectors and a topsides water treatment module, all fabricated in Angola. More than 10 million manhours of work for this project was executed in-country to assemble 64,000 tons of equipment on site in Angola, Total claims. The operator also integrated Angolan employees where possible into the various CLOV teams, including at management level.

Another feature of this project was the deployment of an integrated geographic system (GIS) from the start of the project, with web interfaces. This is a database management system used for grouping together and analyzing digital information in different formats, classified by geographical location with details of site characteristics such as bathymetry, topography of the seabed, and maritime exclusion zones. One purpose of the GIS is to optimize decision making throughout the duration of the project.

According to Total, by adopting the data integration process for the first time during the preliminary study phase, the company was able to check the data's consistency. This applied in particular to the drilling trajectories and positions of the wells relative to the drilling plan. CLOV's GIS, which can manage time aspects, allows the company to simulate the compatibility of two operations schedules, i.e. drilling and installation, with the data used to detect any incompatibility between supports used at sea, i.e. between the drilling rigs, and the vessels laying the pipelines and other subsea equipment. The fleet tracking feature is used to display the positions of all offshore equipment in use in real time.