Shell expands presence in deepwater GoM with Mars B

Shell's Mars B project, located in the deepwater Gulf of Mexico, produced first oil in the first quarter of this year. It is the first time that significant infrastructure has been added to an existing deepwater field in the Gulf, says Shell. 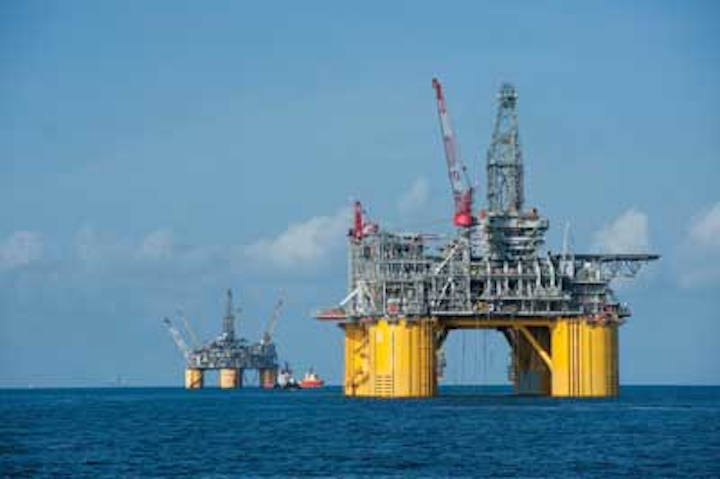 Project said to have largest TLP ever deployed to the Gulf

Shell's Mars B project, located in the deepwater Gulf of Mexico, produced first oil in the first quarter of this year. It is the first time that significant infrastructure has been added to an existing deepwater field in the Gulf, says Shell.

Located in the Mississippi Canyon area in 3,000 ft (914 m) of water some 130 mi south of New Orleans, Mars B is the lone entrant from the GoM in this year's Top 5 projects.

The original Mars field has been operating since 1996, producing roughly 700 MMboe to date. But the size of the opportunity in the development area made it economical to build and deploy a new, second TLP to the area. Shell estimates that there are 1 Bbbl left in the area.

The key to the project has been theOlympus TLP, which is now moored about one mi (1.6 km) from the existing Mars platform. In another industry first, the 120,000-ton structure is said to be the largest TLP ever developed for the GoM.

Shell notes that theOlympus TLP is more than twice as "big" as the original Mars TLP. Weighing over 120,000 tons, the TLP is heavier than 300 Boeing 747 Jumbo Jets. From the base of the hull to the top of the derrick, Olympus is 406 ft tall, approximately 1.5 times the height of the Mercedes-Benz Superdome in New Orleans, which stands 253 ft in height.

The combined deck area on theOlympus is 342,000 sq ft, greater than the total floor area of the Mercedes-Benz Superdome, which is 269,000 sq ft. The column spacing on the TLP is 250 ft (center/center) – a similar footprint to One Shell Square in New Orleans. The tension legs of the platform are fitted with 16 rotationally lined caissons coated with modified high-density polyethylene.

The new TLP hosts a 24-slot drilling unit supplied by Nabors Industries and includes capacity for six subsea wells to gather production from the nearby West Boreas and South Diemos fields via tieback. The reservoirs are located at depths of 10,000 ft to 22,000 ft, approximately 2 to 4 mi below sea level.Olympus, outfitted with 15,000 psi-rated trees furnished by FMC Technologies, will concentrate on high-pressure reservoirs that range in depth from 20,000-22,000 ft.

These facilities are expected to extend the life of the field to 2050 and beyond.

In developing Mars B and its other deepwater assets, Shell was able to draw upon a rich deepwater history that goes back to the Cognac development in 1978, and up to the existing Perdido facility, the current world record holder for deepwater operations.

Olympus is Shell's sixth and largest TLP in the GoM, and uses a passive hull concept that incorporates lessons learned from the Perdido spar, with regard to the shape of the column and placement.

Shell made use of time lapse seismic technology to delineate the Mars B field. This included use of ocean bottom sensor technology, including ocean bottom nodes and wide azimuth acquisition techniques. Use of these technologies, in turn, led to better placement of infield wells, and a better understanding of waterflood performance. This will help increase overall recovery.

For the drilling phase, Shell selected Noble Corp.'sNoble Bully I to drill the top sections of the 24 wells at Mars B, as well as the West Boreas and South Diemos satellite wells. The Noble Bully I features a multi-purpose tower, and is more fuel efficient than older units. This brought a fuel savings of 20 to 30%, and helped to lower emissions in the process.

Shell was able to lower its costs on the Mars B project through standardization and repeatability. For example, using software to model lifting activities enabled the company to make those actions more safe and efficient. Enterprise frame agreements with key suppliers were also an important part of this effort, since they helped to streamline the global supply chain.

Shell made use of standardized components to ensure that subsea trees were ready when the rig was available for work. Shell also developed a "standardized kit" which enabled global suppliers to make sure that they met the company's specification needs.

Integration was a key to the success of the project, and this included integration of the topsides and other surface facilities, drilling and production equipment, and subsea components.

Another key was the global supply chain. For Mars B, Shell depended upon engineering firms, and service and supply companies from South Korea, Europe, and the US Gulf Coast. In all, some 20,000 people contributed to the work on Mars B.

The hull of the TLP was constructed by Samsung Heavy Industries, while the fabrication and installation of the topsides were performed by Kiewit Offshore Services. The hull was completed in November 2012 and transported from the construction yard in South Korea to Ingleside, Texas, in June 2013, using Dockwise'Blue Marlin semisubmersible heavy-lift ship.

The shifting of the platform from Ingleside to the project site was carried out in July 2013 using Crowley's four ocean-class tugboatsOcean Wind, Ocean Wave, Ocean Sky and Ocean Sun, as well as its contracted offshore tugboat Harvey War Horse II. Heerema's Balder deepwater construction vessel was also involved in the installation of the TLP.

Engineering and design works, including assistance during commissioning and start-up of the TLP, were provided by William Jacob Management. The certified verification agent (CVA) for the TLP was ABS.

Broadmoor constructed the living quarters of the platform in collaboration with Hi-Tech Electric. The marine instrumentation system for the TLP was supplied by BMT Scientific Marine Services. A corrosion-resistant rotational lining solution for the caissons was provided by RMB Products.

Up to 80 mi of 16 and 18-in. oil and gas pipelines were coated by The Bayou Companies, a subsidiary of Aegion Corporation. The WD-143C platform was fabricated by McDermott International.

Some 192 people will live and work in the four-story living quarters of the TLP, which features kitchens, fitness rooms, control rooms and an on-site medical facility. Production is expected to ramp up to 100,000 boe/d by 2016. Shell serves as the operator of the project with a 71.5% ownership, with BP owning the remaining 28.5%.