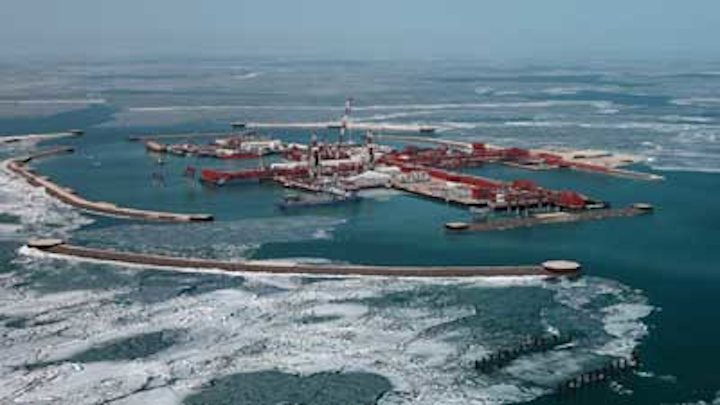 The strategy of Kazakhstan presupposes considerable growth in hydrocarbon extraction, according to the data of the Association Kazenergy. According to these estimates, by 2020 the country will increase the recovery of oil with gas condensate volumes from the current 80 million metric tons to130 million metric tons. A considerable part of the volume must be ensured by the Caspian Shelf development.

At present, the main marine project of Kazakhstan is the Kashagan field in the Northern Caspian that was discovered in the early 1990s. The first well here was drilled in 2000. Geological oil reserves in the field account for 4.5 billion metric tons (35 billion barrels), out of which some 1.7 billion metric tons are expected to be recovered. Natural gas reserves are estimated to be more than 1 trillion cubic meters.

The Italian Agip Kazakhstan North Caspian Operating Co. (Agip KCO), subsidiary company of the Concern Eni, was initially assigned the function of the operator. In January 2009, it was replaced by NCOC (North Caspian Operating Company). Agip KCO remained in charge of Phase 1 implementation of the Kashagan field development (pilot-commercial production), as well as of the on-land part of Phase 2.

The project participants forecasted that in the first stage, during first four years after starting oil recovery, the recovery volume would reach 50 million metric tons; and in the second stage, two to three years later, it would be 75 million metric tons. That should have placed the country among the top five oil exporting countries in the world.

However, the project geology and climatic conditions at the Kashagan field are particularly complicated. To facilitate the development in the contract area, four artificial islands interconnected by pipelines among themselves and with the shore were built.

Yet the advanced technological solutions applied could not prevent regular postponing of the start of the field exploitation from the initial term (year 2005). As a result, the start date for commercial production was set to the end of 2012. Nevertheless, that deadline was not met either. Production actually started in late 2013, yet it was suspended due to a gas leak two weeks later.

The analysis showed the presence of many microcracks in the pipeline, caused as a result of the metal exposure to high sulphur content associated gas.

In the middle of 2014, Kazakhstan representatives repeatedly reported that the oil recovery in the field could not be started before the first half of 2016, although experts question that deadline. Meanwhile, the project participants have made the decision on selecting a new project operator to replace the NCOC.

The biggest oil sector project of Azerbaijan is the development of offshore fields Azeri, Chirag, and the deepwater part of Guneshli. The contract on development, called "the Contract of the Century" was signed on Sept. 20, 1994.

According to the expert opinion, the light crude oil recovery process at ACG ended sooner than expected; now the recovery is getting more complicated in terms of technology. In February 2013, BP-Azerbaijan announced that drilling new wells and taking other measures were planned for the purpose of stabilizing the recovery.

The biggest gas project in Azerbaijan is Shah-Deniz. The project envisages delivery of the Azerbaijanian gas to Europe and Turkey. The Shah-Deniz field reserves are estimated at 1.2 trillion cubic meters of gas. Located in the southern part of the Caspian Sea, 70 km to the south-west from Baku, the hydrocarbon structure Shah-Deniz was opened in 1954.

In 1999, the first well was drilled in the contract plot. The open gas-condensate field reserve estimate accounted for 1 trillion metric tons of equivalent fuel. In 2001, four natural gas sales-purchase contracts were entered into with the Turkish company BOTAS, the Azerbaijan government, and two agreements with Georgia. These contracts allowed the Shah-Deniz project participants to approve Stage 1 of the project in February 2003.

Recovery of 178 billion cubic meters of gas and 34 million metric tons of gas condensate per year was planned within the framework of the Stage 1. For the purpose of transporting the gas from Shah-Deniz to Turkey, the South Caucasus Pipeline was built in 2005-2006.

In December 2006, the first gas from the Shah-Deniz field was obtained, and in July 2007 the gas reached the territory of Turkey. Some 51 billion cubic meters of gas and 13.3 million metric tons of gas condensate have been recovered at Shah-Deniz from the beginning of its development.

Within the framework of Shah-Deniz-2, on which the final investment decision was taken in December 2013, the production is planned to increase to 25 billion cubic meters per year. Within the framework of the project, 16 billion cubic meters of gas per year are planned to be supplied within 25 years to the European market via the Trans Anatolian Natural Gas Pipeline (TANAP) and the Trans Adriatic Pipeline (TAP). The gas supply to Turkey is expected to begin in 2018, and to Europe in 2019.

In May 2014, Statoil sold a 10% share of its 25.5% holding in the projects Shah-Deniz and the South Caucasus Pipeline to BP and Azerbaijan's GNKAR. Statoil sold another 15.5% share to Malaysia's Petronas in May, thus completely dropping out of the project. The company announced that it had made that decision due to its cost-optimization. After the transactions the share participation was distributed in the following way: BP (28.8%), Iranian NICO (10%), LUKOIL (10%), Turkish TPAO (9%), and SOCAR (16.7%).

The Caspian Shelf resources of Turkmenistan account for approximately 12 billion metric tons of oil and 6 trillion cubic meters of gas. Those are the data from the State Agency for the Management and Use of Hydrocarbon Resources under the President of Turkmenistan, published in the 2Q 2014. The Caspian sector is divided into 32 licensed blocks that might be the subject of negotiations with potential investors.

The biggest investor in the Caspian projects of Turkmenistan is the Malaysian company Petronas, which has been operating on the shelf since 1996. At the same time, the main offshore oil production amount is ensured by Dragon Oil (UK-ARE), which recovered 3.4 million metric tons in 2013, by 10% exceeding the volume recovered in 2012. It should be pointed out that the development of a range of offshore fields is complicated due to mutual territorial claims between Turkmenistan and Azerbaijan.

Two big fields, Jeitun and Jigalbek, are situated in Cheleken, the main block of the Caspian Shelf of Turkmenistan. The development is run by Dragon Oil via its subsidiary structure Dragon Oil Turkmenistan Ltd. on the basis of the production-sharing agreement signed in 1999 for a 25-year period. The potential oil and gas condensate reserves at Cheleken are estimated at 677 MMbbl, and natural gas at around 1.5 tcf. According to the data as of the end of 2013, the oil production in the field exceeded 73,000 b/d, and this indicator should grow to 100,000 b/d by 2015.

Ilya Alkov is Markets Editor with Oil & Gas Journal Russia. He graduated from the Moscow State Pedagogical University (Faculty of History) in 1995, and from 1995-1998 he worked for the Interfax news agency as reporter and editor in the oil and gas division. In 1998, he graduated from the educational program "International Oil and Gas Business" at the MGIMO University, and went on to work for various oil and gas and business periodicals and websites as an observer and editor, and for conference companies as a producer. In 2011 he joined Oil & Gas Journal Russia as markets editor.