The Solan oil field covers 7 sq km (2.7 sq mi) in the North Sea, west of the Shetland Islands in 135 m (420 ft) of water. Premier Oil is developing the field, which at peak will consist of two production wells drilled horizontally through the reservoir, plus two horizontal water injection wells to help maintain pressure in the reservoir. 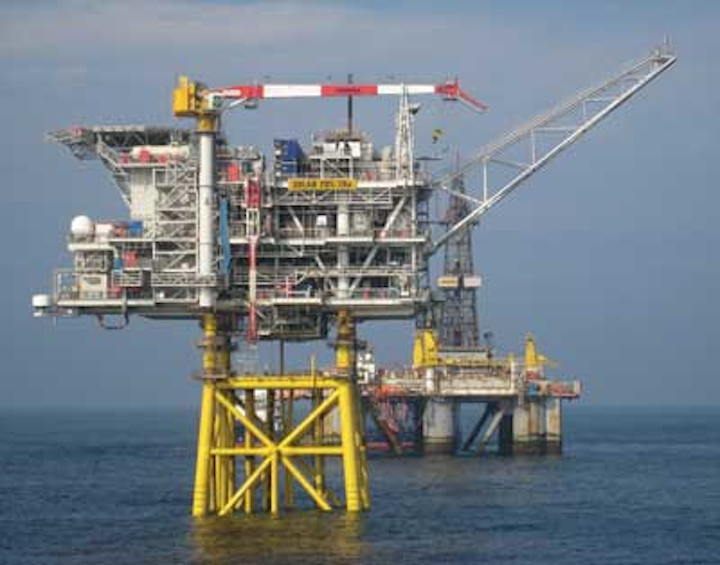 The Solan oil field covers 7 sq km (2.7 sq mi) in the North Sea, west of the Shetland Islands in 135 m (420 ft) of water. Premier Oil is developing the field, which at peak will consist of two production wells horizontally through the reservoir, plus two horizontal water injection wells to help maintain pressure in the reservoir.

To get the oil out, the company is installing a production platform supported by a steel jacket structure and a 300,000-bbl subsea tank that can hold 10 to 14 days' production from the field. The crude from the tank will be offloaded to a shuttle tanker via a flexible hose. The platform holds gas separation and treatment equipment, as well as a full set of control equipment.

Expected production is 24,000 b/d of oil; 35,000 b/d total liquids; and up to 3 MMcf/d of gas. The gas will fuel turbines to power the equipment on the platform. Total production from the field over its projected 20-year lifetime is estimated at 44 MMbbl.

The platform has accommodations for a staff of 30, but it will be manned only for the first year. After that, it will be unmanned and controlled via satellite link from an onshore control room located 250 mi (402 km) away in Aberdeen, with monthly visits for inspection and maintenance. A remote operation will reduce operating costs.

In order to meet SIL levels, the safety system is used for key requirements including emergency shutdown and fire and gas detection. Remote control and monitoring of all equipment on the platform is done through the control system's Remote Access Services (RAS). The tanker loading system interfaces to both the control system and safety system using hardwired connections.

The control system includes a ProfessionalPlus Server, an RAS server, and a historian and sequence of events (SOE) server, all mounted in a 19-in. rack. There is a single dedicated operator/engineer station for times when the platform is manned; during these times the onshore system is locked out. These servers are connected, via a pair of network interface controllers (NICs), to active and standby network switches that are cross wired/connected to each other and to routers that provide routing and load balancing between onshore and offshore data LANS via the redundant satellite link.

The ProfessionalPlus server hosts the control system's configuration database (offshore engineering station) RDP server for two remote stations that serve as backup in case of a failure of the RAS.

The RAS server provides communications to and from the remote network (onshore). If the onshore RAS server fails, access to the offshore control system is handled via an RDP connection.

There is also a GPS time server that provides accurate synchronization of telecommunications-related equipment, server and PC clocks, process controllers and logic solvers and other equipment, plus video surveillance equipment that communicates with the onshore control room.

APM provides access to integrated information from multiple data sources via real-time analyses and reports. It acquires, consolidates and aggregates information for the AMS intelligent device manager and machinery health manager. This enables onshore operations to monitor the performance of critical assets remotely and to predict, detect and correct conditions that could potentially lead to equipment failure and unplanned downtime.

In the onshore control room in Aberdeen is an application station running RAS that connects two remote operator stations to the offshore control system. The onshore RAS server also hosts a continuous historian and alarm and event chronicle to act as a backup to the offshore event chronicle. This can be used to examine SOE data onshore if communications to the platform are lost.

There is also a standby PC to enable the onshore control room to access the remote systems via RDP, which provides remote display and input capabilities over network connections for Windows-based applications running on a server. It acts as an alternative access mechanism in the case of a failure of the remote application station.

An OSI PI Server is connected to the onshore corporate LAN. A PI-OPC interface installed on the offshore application station forwards data collected from the downhole pump systems.

The equipment from Emerson was in front-end engineering and design from June 2012 until March 2013, at which point the execution phase began with the delivery of equipment to the platform fabrication yard in Methil, Scotland. The topsides then sailed to the offshore site was installed on Sept. 9, 2014. An offshore commissioning program will then commence with the exact timing of first oil determined by the progress of that program.

The Solan platform is intended to operate with no onboard personnel, and is provided with an integrated control and safety system that can be operated via satellite link from an onshore operating room in Scotland. Remote operation (which is expected to be expanded in the future to cover additional fields) will reduce operating costs.