Saudi Aramco has inaugurated a new torpedo-shaped autonomous underwater vehicle during a ceremony at the Ju’aymah pier. 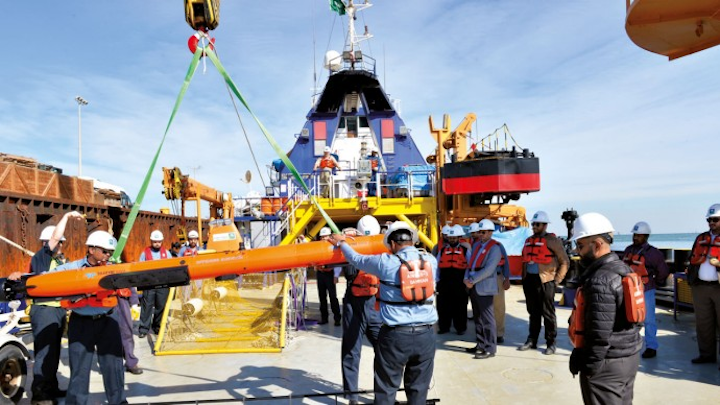 The AUV is designed to perform offshore surveys to identify seabed clearance and potential debris around offshore platforms.

It can also conduct offshore pipeline inspections to determine subsea asset integrity and locate potential leaks. According to Aramco, the vehicle, which cost $2.5 million to construct, can handle duties formerly undertaken by a $50-million, large survey vessel.

In addition, the AUV’s modular design allows for interchangeable modifications based on the mission’s needs.

For example, the sidescan sonar/bathymetric module for geophysical operations can serve as a camera for subsea inspection projects, and as the environmental module for oil leak detection surveys.

An additional battery module can be added to the assembly, allowing the AUV to extend the length of its mission.

Aramco claims the AUV resembles a shrunken vessel, operable remotely from shore or from a boat controlling the vehicle through Wi-Fi when within reach of its connection limit.

When at the required depth, the vehicle travels along its mission’s route by means of its Inertial Navigation System.

Simon Squibb, AUV field team leader in Aramco’s Hydrographic Survey Unit, said the vehicle’s safety features enable it to abort missions and avoid danger with its collision safety systems. Search and recovery is aided via an embedded satellite phone and a pinger locator.