Over the past 20 years, ENWA (formerly MT Freshwater) has high quality, simple to operate, very reliable water treatment units working on the principle of reverse osmosis. 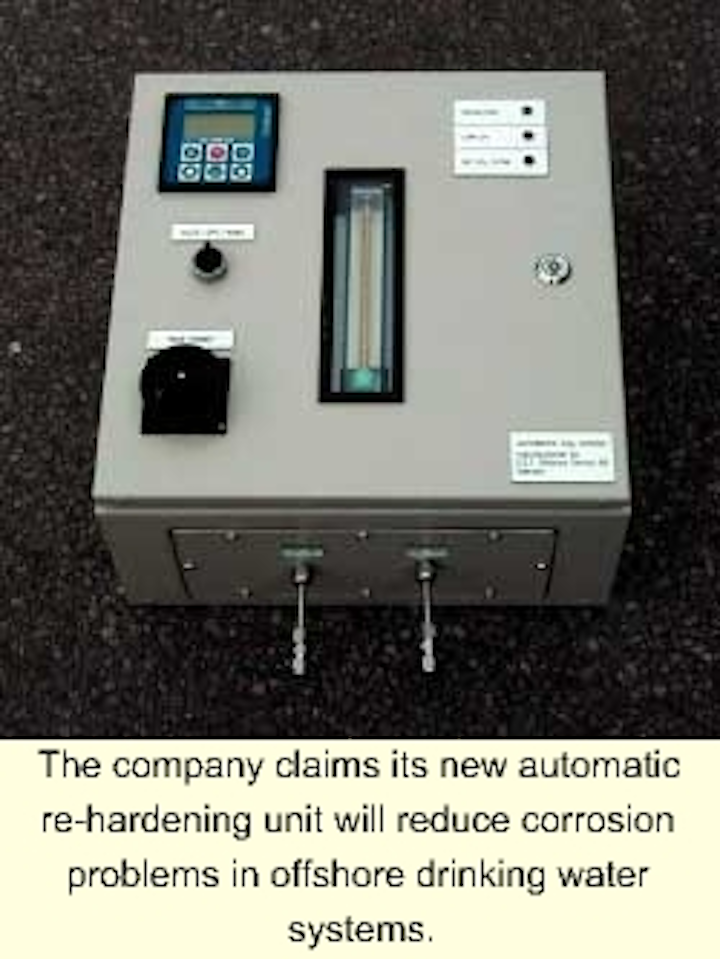 ECT Offshore Services specializes in water treatment in the marine and offshore industries. The firm acts as a consultant to a range of ship-owners and oil comp-anies and has extensive experience of designing, building and installing water treat-ment systems on ships, drilling rigs and platforms, particularly in the Norwegian sector of the North Sea. The education and training of medics and technicians responsible for the systems forms a significant part of the company's business. In this regard, ECT is the only company approved by the Norwegian authorities to provide this sort of course.

Corrosion is one of the most common problems encountered by the company. According to Yvonne Putzig, ECT's offshore manager, more often than not, corrosion is linked to inadequate or unreliable re-hardening systems. These are commonly used to restore the mineral quality of the water after desalination by evaporation or reverse osmosis, making it more palatable and at the same time reducing the likelihood of it causing corrosion. Growing dissatisfaction with the systems available on the market led ECT to develop its own compact unit, which it is now manufacturing and marketing.

The equipment is designed to dose the drinking water stream with a calculated amount of carbon dioxide on a continuous basis before it enters the normal calcium filter. The aim is to ensure that the water is buffered effectively and hence that the hardening process is permanent. A monitor positioned after the filter constantly records the hardness of the water and the information is fed back to regulate the amount of carbon dioxide added.

Apart from improved accuracy and reliability, ECT claims the automatic nature of the units leads to manpower cost savings. The latest unit was installed recently on Smedvig's West Vanguard drilling rig, and ECT is confident of supplying further units to other installations in the near future.

As well as corrosion problems, Putzig is often called out to systems suffering from bacterial growth due to ineffective chlorination. "The cause of most of the problems we see is often not that deep and can be put down to a lack of attention to the systems," observed Putzig. She strongly believes that some operators need to place more emphasis on an area of offshore technology that can severely affect health.

The need for training has been recognized in the Norwegian sector and the authorities support the idea with legislation. The Norwegian Petroleum Directorate has stated that since the courses started the number of incidents involving contamination of drinking water has dropped. Similar legislation does not exist in the UK North Sea, however ECT is campaigning for the major operators to raise the profile of this vital area of technology.

Recently, ECT has also turned its attention to air quality. Putzig has data to show that there is a greater incidence of illness associated with airborne bacteria on offshore installations than in working environments onshore. She feels this is probably due to the greater recycling of air that occurs offshore. "We believe this could be remedied by ozone treatment of the air, a practice already adopted in some hotels," she says.

In association with a leading sensor supplier, ECT has developed a system for automatically ensuring ozone levels of 0.2-0.3 ppm, which is comfortably within recommended levels, but sufficient to eliminate airborne bacteria completely. Support has been forthcoming from the Nor-wegian Institute for Public Health and discussions are being held with a major North Sea operator to set up a trial on one of its installations.