Texaco and Marathon began commercial production of oil and natural gas from the $500 million Petronius project in the Gulf of Mexico in Viosca Knoll Block 786. 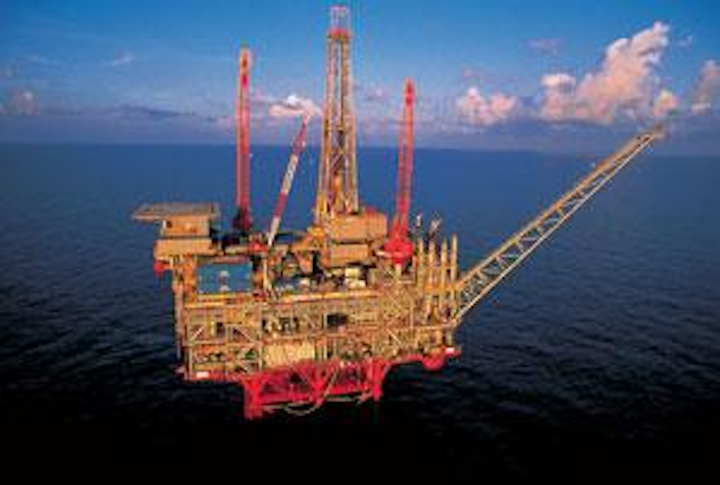 Texaco and Marathon began commercial production of oil and natural gas from the $500 million Petronius project in the Gulf of Mexico in Viosca Knoll Block 786. Production from two pre-drilled wells is 8,700 b/d and 6 MMcf/d of natural gas. Output will increase as production rampup continues.

Three additional pre-drilled wells will be brought on production, leading to rates of 40,000 b/d of oil and 35 MMcf/d of natural gas by October. Operator Texaco and Marathon each have a 50% working interest in Petronius.

No negative impact expected with FPSOs

A 700-draft of the environmental impact study for FPSOs in the Gulf of Mexico indicates the MMS does not believe there will be negative impacts to the environment if the Gulf of Mexico is opened up for using floating production, storage, and offloading (FPSO) vessels. Hearings are scheduled for mid-September in Alabama, Louisiana, and Texas. Following the hearings, there will be a 60-day comment period. The final EIS should be released in January 2001.

BHP says a well on Atlantis in the Atwater Foldbelt ultra-deepwater area of the Gulf of Mexico encountered a significant oil zone in Miocene sands with over 300 ft of net pay. This is BHP's third discovery in the Atwater Foldbelt with BP Amoco. Neptune and Mad Dog are the other two. The Atlantis No. 2 well, drilled by the C.R. Luigs, is located in Green Canyon Block 743 in 6,675 ft of water. BHP owns 44%, and BP Amoco owns 56%.

The Llano No. 3 well, located on Garden Banks Block 386, was drilled to a TD of about 25,500 ft and encountered hydrocarbons in the Lower Pliocene and Miocene-age sands. The well encountered 340 ft of net pay, compared to about 200 ft of net pay from sands encountered in the discovery well. The appraisal well is located about one mile northwest of the discovery well. The Llano No. 3 well will be temporarily abandoned to be completed later as a producing well. Operator EEX has a 30% working interest, ExxonMobil has 20%, PanCanadian Petroleum Ltd. 20%, and Enterprise Oil Plc 30%.

Pioneer reported a new pool gas discovery on its Fiji prospect in Brazos Block A-7 offshore Texas. The well flowed at a 8 MMcf/d from a secondary objective at 12,300 ft. The deeper primary sand objectives were present but non-productive. The well is producing from existing Pioneer-operated facilities. Working interest partners are Pioneer with 50%, Dominion E&P, with 33.33%, Challenger Minerals with 9.17%, and Cheyenne International with 7.50%.