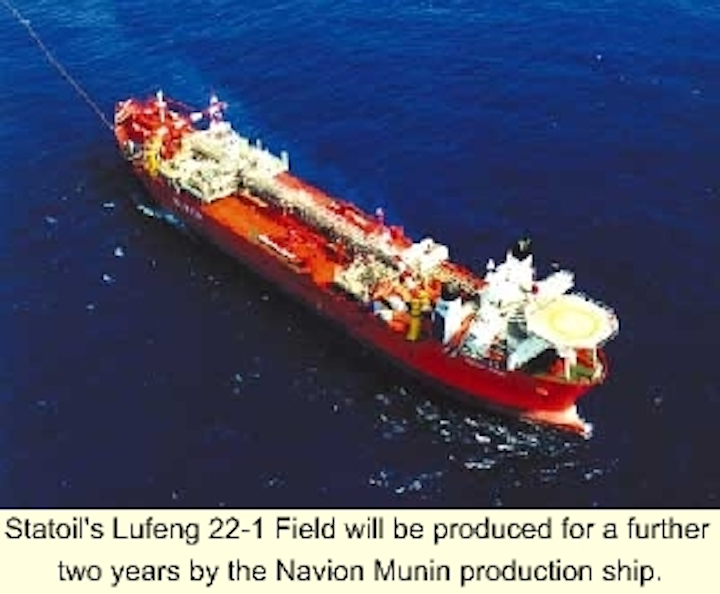 Statoil has successfully implemented new production technology on the marginal Lufeng 22-1 Field in the South China Sea. Earlier this year, in conjunction with China National Offshore Oil Corporation, it extended production on the field for a further two years.

When Lufeng 22-1 came onstream in December 1997, the partners - Statoil holds a 75% interest and CNOOC 25% - had committed only to two years of production. At that stage, recoverability of the heavy oil reserves was uncertain, and it was unclear how long operations would remain viable. The performance of the newbuild production ship and the electrical submersible pumps on the seabed were further unknowns.

The experience, however, has proved a positive one, both in terms of the technology and the production status, according to Arnfinn Jøssang, Vice President of Statoil's E&P division. The difficulties caused by the collapse of oil prices in 1998 have been successfully weathered, and the partners have not shut the door on continuing production once the two-year extension is up in early 2002. By that time an estimated 27.5 million bbl of oil will have been recovered from the field.

Lufeng 22-1 is produced using the Navion Munin production ship on lease. It is the first such ship to be moored using the submerged turret production (STP) system, which was originally developed by Statoil and became the property of Navion when it was subsequently spun off from Statoil. In a typhoon-prone area like the South China Sea, the STP allows the ship to be disconnected and sail out of the danger area when a typhoon threatens.

This has happened four times so far, twice in 1998 and twice in 1999, says Jøssang. On average, it has meant a production downtime of some 96 hours, with the actual disconnect operation taking 6-8 eight hours and reconnection about 5.5 hours.

Average production regularity to date has been 94%. In 1998, the first year of operation, 23 days were lost, nine of them due to weather interruptions, seven while initial tuning of systems was taking place, three for rectifying damage caused to one of the subsea booster pumps during installation, and four for scheduled maintenance. Last year, in addition to weather interruptions, five days were lost when the ship's electrical system suffered mechanical failure. This year, when the only downtime so far has been due to planned maintenance, regularity has risen to 98%.

The subsea electrical booster pumps, which were supplied by Framo Engineering, have also proved their worth. Lufeng 22-1 lies in a water depth of 330 meters. The pumps were selected to speed up flow from the wells and to help lift the heavy oil from the wellhead to the vessel. Their assistance was not required so much in the early months, but reservoir pressure has decreased to the point where they have been run at full speed for over a year now, Jøssang says.

The field is being produced through a pure depletion strategy; there is no water or gas injection to aid oil recovery. Initial production was 60,000 b/d through the five wells, but this has now dropped to a level of 12,000-14,000 b/d, while the water cut has risen to 85%. Hydrocyclones are used to clean the produced water, reducing the oil-in-water content to 20-25 ppm - well under the official limit of 40 ppm - before it is dumped in the sea.

Operating costs have been reduced since startup. Substantial savings have been made by coordinating logistical operations, which account for a large proportion of total operating costs, with those of other operators in the area. There has also been an active nationalization program, replacing Norwegian expats with Chinese nationals, both on the ship and at the operations base at Shekou.

Given an oil price of US$20/bbl, production will remain profitable down to around 5,000 b/d, Jøssang says. High prices over the last year or so have made it possible to recover the losses suffered during the period of low prices.

When production does finally cease for good, decommissioning of the field facilities should be relatively straightforward. The ship, its moorings, and the process equipment installed on it belong to the partners which make up Lufeng Development Company (LDC) - Navion and Advanced Production Systems, a joint venture between Aker Maritime and Statoil itself, which built and supplied the process facilities. The field licensees own all the subsea equipment - trees, flowlines, riser, and seabed pumps - and will be responsible for retrieving them.

When the licensees decided to extend production beyond the original two years, they also renegotiated the contract with LDC. The contract was originally based on a fixed daily payment, but payment now varies according to production level and oil price.

The change has improved the alignment of interests between the licensees and contractor, in Jøssang's view. "In general, we've learned that the daily payment should reflect the cash flow from the field, which means that payments will be higher at the beginning and lesser towards the end," he said.

The experience as operator of a foreign field has also been valuable for Statoil, even though China is not one of the company's core areas. "We've learned that being operator is the way to develop the organization," Jøssang says. "We should focus more on getting this experience and knowledge."