An average of 120 rigs will be contracted in the Gulf of Mexico this year, forecasts New York-based Salomon Brothers. That's down about eight percent from average demand in 1994. "We anticipate an above-normal seasonal decline in demand to a bottom of approximately 100 rigs under contract during the second quarter, followed by a second-half recovery," said a report by Salomon's Mark S. Urness. 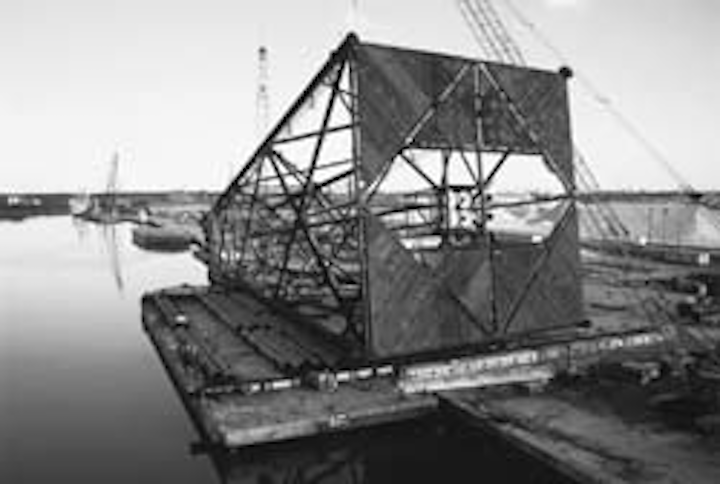 An average of 120 rigs will be contracted in the Gulf of Mexico this year, forecasts New York-based Salomon Brothers. That's down about eight percent from average demand in 1994.

"We anticipate an above-normal seasonal decline in demand to a bottom of approximately 100 rigs under contract during the second quarter, followed by a second-half recovery," said a report by Salomon's Mark S. Urness.

"We expect supply to shrink during the year from 179 to 170 as rigs depart the Gulf of Mexico for stronger overseas markets. Average utilization for 1995 is estimated at 69 percent, down from 74 percent in 1994. Gulf of Mexico jackup day rates are expected to fall by 5-10 percent on average in 1995 from 1994 levels. In 1996, we forecast demand will rebound to 136 rigs under contract, based on a natural gas price forecast of $1.80 per million Btu.

"With an estimated 1996 supply of 170 units, we forecast average 1996 rig utilization of 80 percent, which will lead to improved dayrates next year," wrote Urness. Marine Drilling and Noble Drilling were cited as having "considerable downside exposure" to weakening Gulf of Mexico jackup market. "Each of these companies operates a large number of commodity jackups, which will experience the greatest reduction in dayrates." Others in this market, such as Global Marine, ENSCO, and Rowan Companies, are better positioned since their fleets "are predominantly oriented toward deeper water depth capacity, cantilevered jackups." 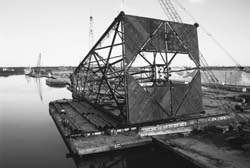 Brown and Root's Greens Bayou Fabrication yard on the Houston Ship Channel recently loaded out this drilling/production jacket for Walter Oil and Gas. The jacket was installed on West Delta 106. Initial production is expected from three wells, with additional drilling planned for later this year.

DeepFlex Production Partners, a joint venture aimed at supplying floating production systems to Gulf of Mexico operators, has been launched by Coflexip Stena Offshore and DeepTech International. Plans for a similar venture between DeepTech and Reading and Bates were canceled.

"DeepFlex provides a new level of service previously unavailable in the Gulf of Mexico," says Christian Marbach, president and chief executive of Coflexip Stena Offshore. "For some applications our floating production systems will be a viable alternative to permanent production stations or an interim solution for early production needs."

DeepFlex initially plans to acquire two second-generation semisubmersibles for conversion to floating production systems. The first unit is scheduled for installation in early 1996. DeepFlex says it could ultimately own a fleet of six floating production units. 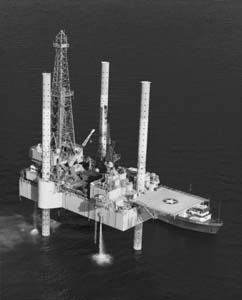 This decommissioned jackup, formerly the Ocean Star, is about to gain life as part of the proposed Offshore Energy Center. The Houston-based non-profit group plans to use the rig as part of an offshore museum planned for Galveston.

Seneca Resources says it has completed three wells in West Cameron 552, offshore Louisiana. Each of the wells is a single completion with a second selective completion behind pipe. Combined test flow was 62 million cu ft/day of gas and 952 b/d of condensate. Production facilities are in place for up to 80 million cu ft/day. Seneca says the gas will remain shut-in until prices improve.

Fugro-McClelland Marine Geosciences has contracted the Norwegian vessel M/S Bucentaur to preform geotechnical and geologic site investigations in the Gulf of Mexico deepwater for Shell Offshore. The dynamically positioned Bucentaur is a coring vessel capable of operating in water depths as great as 5,500 ft. It is owned and operated by Farmand Survey.

The proposed pipeline will connect with Callon's Mobile Offshore Gathering Line in Alabama State Tract 73. The permit application has begun and construction is expected to start mid-1995. Capacity for the gathering system will be 100 million cu ft/day of gas. The agreement provides for Chevron to purchase firm capacity commitments from Callon for deliveries through the completed pipeline system for 15 years, beginning in mid-1996.

Oklahoma City-based Frontier Natural Gas has released test results on its wildcat well located in the shallow waters of Mobile Bay, Alabama. The State Lease 746-1 well was drilled to 5,102 ft to test the Miocene and Wilcox targets.

The Wilcox did not contain hydrocarbons and the well was plugged back and completed in the Miocene at 2,352 ft, which was the well's primary target. The well tested 3.8 million cu ft/day of gas on a 28/64 inch choke. Calculated open-flow potential is 16.8 million cu ft/day. This is Frontier Natural Gas's first offshore well.