E&P activity in the Gulf of Mexico continues to rebound after its nadir in 2010, and a recent study by consulting firm Wood Mackenzie confirms this positive outlook. 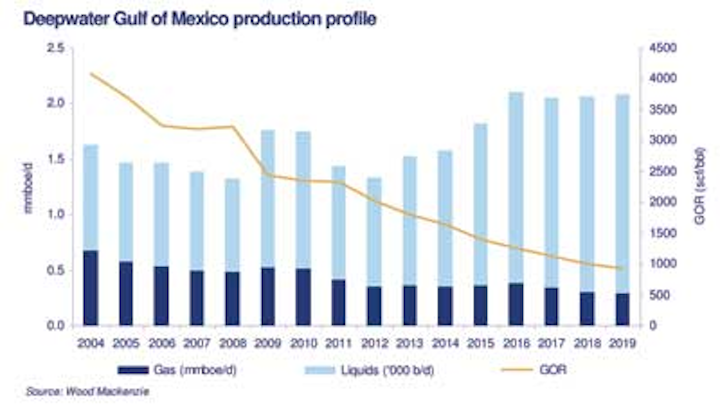 E&P activity in the Gulf of Mexico continues to rebound after its nadir in 2010, and a recent study by consulting firm Wood Mackenzie confirms this positive outlook. The report, entitled "Deepwater GoM Production to Rebound Strongly," predicts that the production outlook will continue to improve through 2016, but it also suggests that there will be a few more bumps in the road until production returns to pre-Macondo levels. 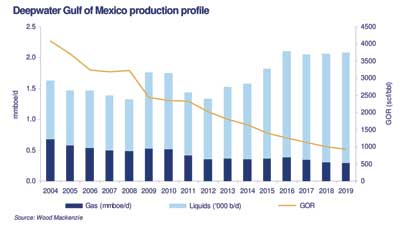 Wood Mackenzie observes that the deepwater GoM will be a key production growth area for a number of the majors' portfolios over the next four years. The report notes that BP stands out in this analysis, with the return of production from deepwater Gulf representing 45% of its global increase over this period. The region is also a key driver of near-term expansion for Shell, Chevron, ExxonMobil, and Statoil.

If this growth is to be achieved, the recent decline in deepwater GoM production will need to be reversed. The report notes that production declined by almost 18% to 1.4 MMboe/d in 2011. Despite a relatively calm hurricane season, the decrease was expected due to permit-approval constraints and a tight rig market which delayed development. Wood Mackenzie says that it expects production to continue declining this year before reversing course with significant year-over-year gains to a new peak of over 2.0 MMboe/d in 2016.

Besides the slow-down in the permit-approval process and a tight rig market, the report notes that most of the decline is due to a few fields. Atlantis, Mad Dog, Mars, and Thunder Horse will account for 60% of the decline between 2009 and 2012, with Thunder Horse having the largest decline at around 95,000 boe/d. These fields were some of the biggest producers prior to Macondo.

Things are expected to get better over the next few years. Production is expected to improve steadily post-2012 to 1.6 MMboe/d by 2014. Activity at several key fields, including the four with the greatest declines, and additional production from several new fields will be key to reversing this trend.

The return to the pre-Macondo level is expected by 2015 and a new high of over 2.0 MMboe/d is expected in 2016. Growth from 2014 to 2016 will be spearheaded by many new, large fields, such as Hadrian, Jack/St. Malo, and Lucius, as well as development activity at legacy assets.

Future production will be more challenging, as activity moves to deeper water. The report states that the majority of the new fields will be located in ultra-deepwater (> 1,500 m, or approx. 4,921 ft) by 2015. It is also moving to the oil-rich subsalt Pliocene/Miocene and Lower Tertiary plays. These frontier fields will require innovative advancements in engineering and technology, and will be more expensive to develop. High oil prices and lessons learned from Perdido and Cascade/Chinook will facilitate progress in these emerging plays.

Growth will be driven mostly by subsalt fields, which will account for over 65% of production by 2016. Development work at the legacy subsalt Miocene Atlantis, Mad Dog, and Thunder Horse fields, as well as the supra/subsalt Mars project, will contribute a combined 290,000 boe/d by 2016.

By 2016, production from the new subsalt Pliocene/Miocene Hadrian and Lucius fields is expected to contribute a combined 175,000 boe/d. Meanwhile, the subsalt Lower Tertiary Jack/St. Malo and Cascade/Chinook developments will add a combined 150,000 boe/d.

The report also projects that production from conventional Pleistocene, Pliocene, and Miocene fields will remain relatively steady from 2012 to 2014, and then decline. In the Mississippi Canyon protraction area, LLOG's Who Dat field and Noble's Galapagos project – which includes the Isabela, Santa Cruz, and Santiago fields – will counter the trend and add a combined 55,000 boe/d by 2016.

Eight companies – Anadarko, BP, Shell, Chevron, BHP Billiton, ExxonMobil, Statoil, and Petrobras – out of 63 with production in deepwater GoM are expected to account for 93% of the growth from 2012 to 2016.

The consulting firm notes there is no guarantee about the rebound, as several significant risk factors remain. The most serious of the risks that could retard this positive prediction is in economics. Oil price declines to $70/bbl or less would likely delay or even suspend deepwater plans.

All three Noble Energy Inc. wells at the Galapagos development in the deepwater Gulf of Mexico are now producing and at rates greater than forecast. At the same time, Noble is discontinuing appraisal of the Deep Blue prospect.

Production at Galapagos started from the BP-operated Isabela field in early June, followed by the Noble Energy-operated Santa Cruz and Santiago fields. With the addition of Galapagos, Noble Energy's deepwater Gulf of Mexico production has increased to approximately 30,000 boe/d, with more than 80% of that as oil.

On Deep Blue, Noble and partners will not continue with appraisal work even though the initial well and a side track both encountered hydrocarbons. The Deep Blue well originally spudded late in 2009 and the side track was under way when the moratorium following Macondo became effective. Noble Energy was required to suspend operations, and the rig working at that time was released. After the moratorium was lifted, another rig was certified under new regulatory requirements and the side track was finished.