The existence of several deeply incised and filled paleo-canyons in Paleocene shelf strata around the Gulf of Mexico leads us to speculate that the water level was drawn down by evaporation at least once by as much as 3,000 ft while the Gulf was temporarily isolated from the world ocean. 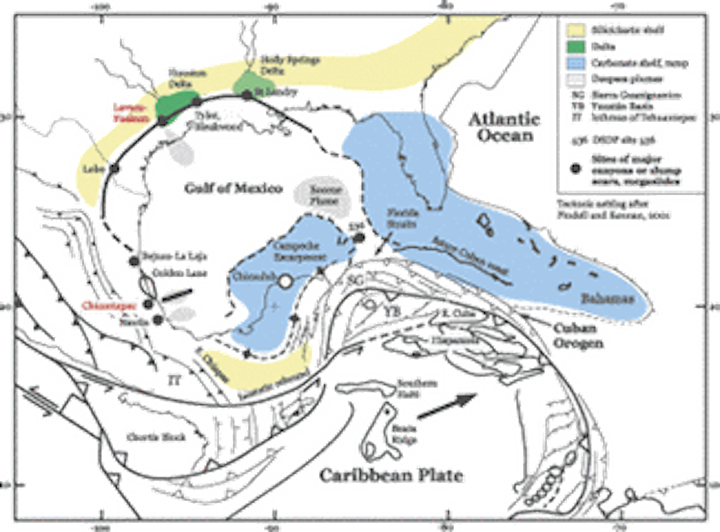 The existence of several deeply incised and filled paleo-canyons in Paleocene shelf strata around the Gulf of Mexico leads us to speculate that the water level was drawn down by evaporation at least once by as much as 3,000 ft while the Gulf was temporarily isolated from the world ocean.

Isolation of the Gulf was caused by choking of the southeastern Gulf/Florida Straits during collision of the Cuban forearc terrane with Yucatán and Nicholas channels and the Straits of Florida north of Cuba suggest that breaching and refilling (catastrophic?) of the Gulf occurred here, possibly more than once.

We find no evidence to suggest early Paleogene structural or tectonic uplift in the western and northern Gulf margins. In contrast, the canyons in the Mexican portion of this trend were situated in the tectonically loaded Sierra Madre foredeep basin and thus were actively subsiding at this time. Three aspects of these canyons indicate they were formed due to severe drawdown during isolation, rather than eustatic fluctuations of "normal" magnitude or catastrophic fluvial discharge across the margin:

This hypothesis carries first-order implications for hydrocarbon exploration, namely the occurrence of extreme basinward shifts in facies and the enhancement of secondary porosity in subaerially exposed carbonate portions of the Gulf's margins.

The presence of multiple unconformities in the Florida Straits suggests that the Gulf may have been drawn down either intermittently or continuously over the entire Late Paleocene to Late Eocene before it was permanently linked to the world ocean. In either case, the Gulf's margins should not be used to infer eustatic fluctuations for Paleocene through Eocene time.

The Chicontepec Formation west of Golden Lane comprises three members of the Paleo-cene-Lower Eocene age. The works of Busch and Govela (1978), Carillo (1980), Cantú (1985), and Bitter (1993) vary in detail, but each documents the existence of a 3,000-ft deep paleo-canyon within the formation. We integrate and summarize:

The lower and middle members span the Paleocene in a foreland basin setting between the Tuxpan (Golden Lane) carbonate platform and the Sierra Madre Oriental. Paleoenvironment was outer neritic to upper bathyal, and deposition was turbiditic. Cut into these and units as old as Jurassic is a canyon filled with silty sediments of the latest Paleocene-earliest Eocene Upper Chicontepec member, in which faunal zonation is apparently lacking.

Overlying this member are the prograding littoral and neritic Guayabal and Tantoyuca Formations of Middle and Upper Eocene age. The Upper Chicontepec isopach thickens westward, and Busch and Govela (1978) considered that current direction was westward during canyon formation. However, if the original depositional surface dipped eastwards as the canyon was cut, the same isopach could be formed with a flat or east-dipping floor with eastward flow. We find this to be more in line with regional geology.

At the Nautla Canyon to the south, some 6,000 ft of Chicontepec sediments overlie Jurassic red beds, suggesting the canyon cut the entire marine section here. The Cretaceous sections cut by these canyons comprised carbonates and marls that were probably well lithified by Paleocene, and thus fairly strong currents operating over a significant time interval were probably needed to cut them. Offshore seismic lines suggest the existence of a thick wedge of Paleocene-Eocene material beneath the Mexican Ridges Foldbelt that may represent the eroded canyon fill plus material brought down the canyon from the shelf.

Concerning the Tamabra talus breccias west of Golden Lane, Enos (1988) details the need for flushing by meteoric water down to 2 km to explain cavernous and other secondary porosities, which becomes far easier to understand if the Chicontepec Canyon were subaerial for a time. Halley et al. (1984) describes similar circumstances at DSDP Site 536, the location of which may also have been subaerial or nearly so for part(s) of the early Paleogene. Like the canyon itself, such secondary porosity in the Golden Lane and Tamabra carbonates may have required significant time to form.

To the north, the Lobo and Lavaca mega-slumps comprise Lower Wilcox and equivalent material of the shelf-slope break. At Lavaca, the Yoakum Canyon cuts the Lavaca slumps as well as low-gradient Lower Wilcox shelf deposits to the northwest for at least 80 km. Like Chicontepec, the incision is about 3,000 ft with canyon sides sloping locally at 30 degrees, and the canyon is filled with silts that spill beyond the canyon limits.

The shelf rather than slope setting for this canyon is important because we cannot find other analogues where shelf sections are incised in this way without severe relative drops in base level, and we can more confidently propose a subaerial rather than submarine setting for canyon incision here. We speculate that the "sandy channel fills and turbidite mounds" in the canyon cited by Galloway et al. (1991) may suggest a subaerially eroding canyon with slumping walls and a river in the thalweg. We further speculate that a similar major paleo-canyon may exist under the lower Rio Grande Valley.

Few other examples of shelf canyons with this magnitude exist in the world, and those that do carry an explanation:

We expect that dampening of current strength in the marine environment would inhibit such magnitudes of incision on the shelf, and we find it difficult to envisage how canyon flanks in only semi-consolidated material could approach 30 degree slopes in an active marine environment, known otherwise to be a site of strong longshore drift (Galloway et al., 2000).

From the above, we speculate that Chicon-tepec (lithified rock) and Yoakum (shelf setting) and other paleo-canyons, phenomena not known for any other time in the Gulf, are best explained as having formed during severe water level drawdown. This was followed by rapid flooding of margins as the barrier to world seas was breached, thereby leading to the marine canyon fill.

If the flooding event was erosive, we would expect little if any record of the subaerial period between Lower Wilcox and canyon fill sediments. A reasonable net evaporation rate of only six inches per year in this paleo-setting of 20-25 degree paleo-latitude could have lowered base level by the anticipated 3,000 ft in only 6,000 years, but it could have taken longer, given the degree of required erosion.

By end of Paleocene, the Western Interior Seaway, Chiapas Basin, and Suwannee Straits no longer connected the Gulf and world ocean. This left the southeast Gulf only, where widespread Paleocene and Eocene unconformities north and west of Cuba suggest that the Late Paleocene to Middle Eocene collision of the Cuban forearc with the northeast Yucatán and Bahamas carbonate margins might have shut that connection off also.

With the Chicontepec, Yoakum, and other canyons providing direct reason to suspect it, we propose that Cuba did, in fact, close off the southeast Gulf. Further, there is no particular reason to assume that the Gulf was not intermittently or continuously sealed off over the entire Late Paleocene to Late Eocene interval, after which more normal deposition is known to have resumed in the Florida Straits.

Finally, we point out that the "Eocene Plume" in the eastern deep Gulf (Galloway, 2000), which is the only Cenozoic unit in US waters to thicken southward, was, in our opinion, probably derived from the Cuban orogen and/or missing section at the unconformities in Florida Straits.

Our hypothesis provides a unifying mechanism for periods of:

We make no attempt to define the number or duration of times the Gulf was isolated from the world ocean. Multiple cycles of rapid drawdown and flooding of varying magnitude may have occurred.

This assumes episodic blockage of the Florida Straits, but alternatively, the Gulf may have remained isolated for the entire Late Paleocene- Late Eocene interval, such that cyclical climatic cycles in the Gulf's catchment area controlled relative water level. In either case, the Gulf is unsatisfactory for calibrating eustasy at this time. A one-km drop (and subsequent rise) in the Gulf's water level would have raised (and lowered) the global sea level by a modest two meters (W. Pitman, pers. comm.).

Drawdown of base level by ~3,000 ft would have produced moderately hypersaline conditions in the remaining Gulf. However, no Eocene evaporites are known, and we assume for now that they either were not deposited or were dissolved upon reflooding. But it may be presumptuous to assume that all salt is Jurassic.

The isostatic response of lithosphere to water drawdown and flooding is potentially important. For every km of water removed/added from/to the Gulf by evaporation/flooding, the lithosphere (and the remaining water in the Gulf) will rebound/subside by about 300 meters. Rivers would have to cut into the rising section to reach the Gulf, and areas such as Florida would become better sea barriers by this process.

These considerations would reverse upon re-flooding: once flooding began, added water would load the Gulf floor and margins and cause them to subside, renewing marine deposition across the formerly subaerial and progradational shelves/upper slopes. The Big Shale and Upper Chicontepec formations would be one such interval; others could be the Yoakum, Reklaw, Weches, Cook Mountain, and Moodys Branch formations (Galloway et al., 2000).

Our hypothesis carries the following implications for hydrocarbons: