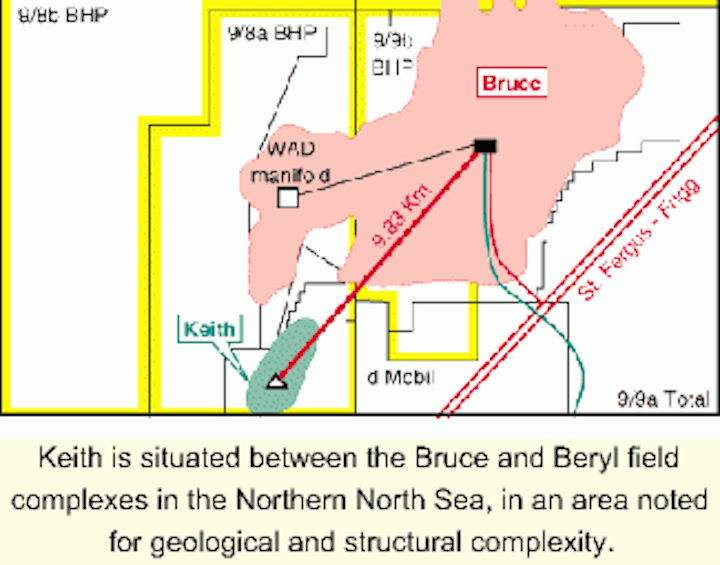 After a period of apparent disinterest, UK operators are at last taking steps to counter the threat of waning production in their sector. Many are revisiting the scores of forgotten fields within touching distance of North Sea platforms. Reservoir uncertainty has deterred development in the past, but marginality has to now be offset against the specter of platform abandonment.

Among schemes going forward after years on hold are TotalFinaElf's Nuggets gasfield cluster, as tiebacks to Alwyn. Other, more problematic fields, which have so far defied commercial logic, are being "pitched" to design contractors for new solutions under the UK industry-government Satellite Accelerator Initiative. These include BP's Wood (close to Arbroath) and Shell's Kestrel, near the Tern platform.

The latest field to be "reactivated" is the BHP-operated Keith, which lies under 120 meters of water in northern North Sea block 9/8a. It was discovered in 1983. Appraisal drilling, four years later, confirmed it was not an extension of BP's Bruce Field to the north, which has since emerged as one of the largest producing gas-condensate deposits on the UK Continental Shelf. Two subsequent wells on the Keith structure suggested potential gross reserves of up to 50 million boe.

The reservoir's horizons were reasonable quality Mid-Jurassic Brent sands, but like Bruce, the structure was heavily faulted and prone to compartmentalization. With development of Bruce still a few years off, then-operator Hamilton (now BHP) suspended further work to concentrate on other projects in the North Sea and Liverpool Bay.

In the mid-to-late-1990s, BHP sold most of its North Sea interests, but retained its options on Keith. It became more attractive once BP brought Bruce onstream and latterly Bruce West, where a subsea manifold was installed, linking a new sets of wells to the Bruce platform. Since November, these have included producer wells from Keith.

Despite surging oil prices, BHP and its partners BP, TotalFinaElf and Marubeni resisted the temptation to go for full-scale development from the outset. Instead, they have opted for an extended production test from a single, re-entered well. Reservoir performance will be monitored closely - cumulative production and bottomhole pressure data will be compared with the reservoir simulation model to determine whether further development is justified. Britain's Department of Trade and Industry has sanctioned single well production for at least three years.

First phase production could amount to around 15 million boe. The initial rate was estimated to be 15,000 b/d of oil and 15 MMcf/d of gas. Oil flow is expected to tail off rapidly to near 8,000 b/d by the end of the first year, but this figure is by no means certain, given the reservoir's complexity, according to a paper given by BHP's Simon Gorringe at the recent Subsea 2000 conference in London.

Reservoir modeling highlighted the need for gas lift to maximize recovery during this first phase. Dehydrated gas is therefore provided from the Bruce platform via the Western Area Development (WAD) manifold. Keith's oil and gas is exported to the manifold through a 7-km pipeline bundle connected to a flowbase at the re-entered well 9/8a-14. The bundle comprises an 8-in. pipe-in-pipe production line, a 3-in. gas lift line, and numerous control and chemical injection lines.

The production line is insulated to protect against wax formation and to obviate the need for permanent pigging facilities. On reaching the Bruce platform, the gas is processed before heading out again east through the Frigg gasline to the St Fergus terminal north of Aberdeen. Cruden Bay is the ultimate destination for Keith's oil, via a 24-in. line between the Bruce platform and BP's Forties complex.

Following sanction for Phase I in 1999, the partners commissioned a detailed well site survey at the 9/8a-14 location. According to Gorringe's paper, this revealed that the elevation of the existing wellhead was lower than anticipated, and its inclination, at 2.2 degrees, was not suited for the re-entry. The SIT of the christmas tree was therefore modified to take account of these factors, and the guide funnels for the production choke were also modified to ensure that the insert could be changed out.

The original wellhead had been supplied by Kvaerner National, and Kvaerner Oil & Gas, Aberdeen, was commissioned to manage the re-entry and wellhead inspection, as well as providing and installing the new tree. This work was awarded in May 1999, prior to government sanction for the development.

Retrieval of the wellhead was undertaken using equipment deployed from ROVTech's DP Eagle remotely operated vehicle. The wellhead's integrity was proven following pressure testing up to 4,500 psi. As was to be expected, the wellhead sealing face had been exposed to substantial marine growth - this was addressed using Kvaerner's specially designed, hydraulically activated cleaning tool, which measures 1.4 meters high, 0.9 meters in diameter, and weighs 15 kg in seawater. A soft wire brush was used for the scouring operation. Altogether, the operation lasted five days.

Final lift weight of the new integrated tree was 46 tons, but the maximum lift weight of the cranes on the workover semisubmersible John Shaw was just 36 tons. Accordingly, the tree had to be broken down, re-built, and re-tested offshore on the John Shaw. Coincidentally, tests onshore highlighted a problem with the downhole gauge system. This was resolved by changing out the Exal gauges from the QL High Temperature to QU Standard. During the event, two sets of working downhole gauges were delivered during running of the completion. These provided 100% redundancy to maximize availability of data to analyze well performance.

Other key enabling technologies include use of a Framo multiphase meter, initially for data acquisition, but possibly for allocation purposes later on. Also, integrating the multiphase and gas lift meters, choke valves, and SCM, with the horizontal tree, reduced the number of interfaces and also maximized effectiveness of the onshore integration test process. A unique feature is the use of high pressure gas (482 bar) for lifting. A single gas lift valve has been installed at a depth of 10,500 ft.

At project sanction, there was an element of risk concerning the re-entry exercise, which was unquantified. However, hurdles encountered during the well site survey were overcome and the project was completed on schedule, within a year of gaining approval, for a budgeted capital expenditure of $25 million. Aside from Kvaerner, the chief contractors were Halliburton Subsea (pipeline and manifold system) and Transocean Sedco Forex for drilling operations.

BHP believes that between one and two years of primary production will be needed before the partners can establish whether a second development phase is feasible. To expedite this process, the tieback facilities have been designed to facilitate expansion with minimal delay. Potential upside following additional producers could amount to a further 10 million bbl and 20 bcf.