Too much money chasing too few prospects 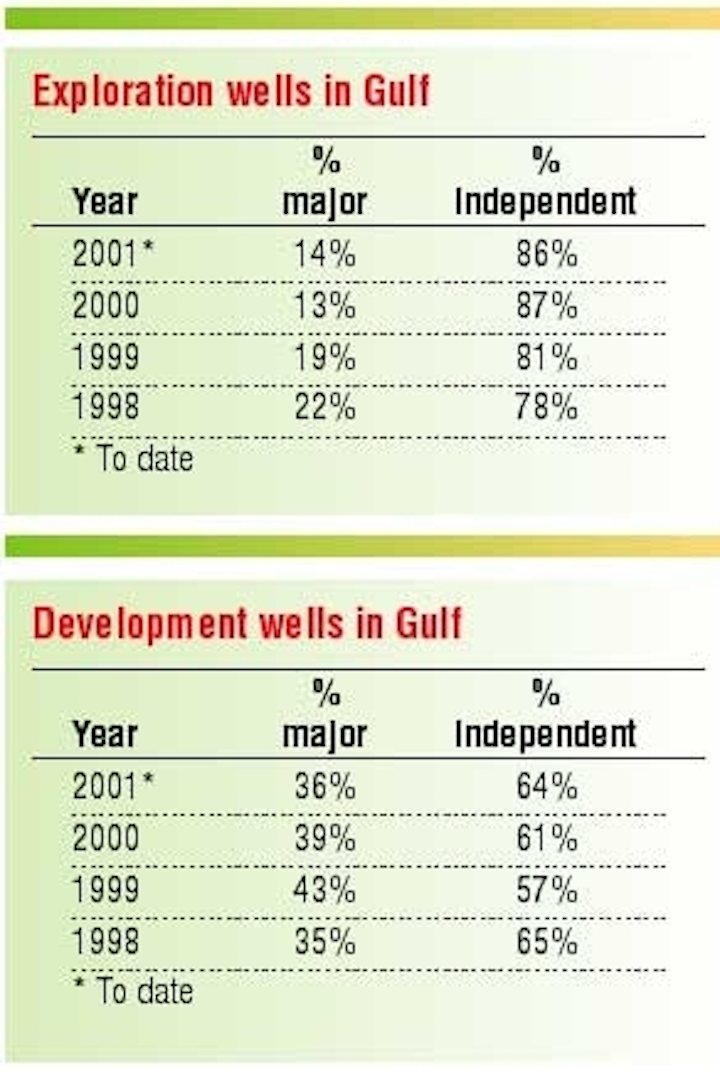 Oil and gas producers will shortly began expanding drilling operations in the Gulf of Mexico, encouraged by a number of related factors:

James Dodson of Texas-based Dodson Data Services cited these four factors as inducements for producers to boost drilling in the coming months. Even though many tracts in the lease sale just held have been drilled, interest in the sale was very high.

"Basically, what we have in the Gulf of Mexico is a lot of money chasing too few prospects," Dodson stated. "Whether that will be the driving force behind boosting drilling numbers, or just the prospect of acquiring leases on the shelf that are accompanied by royalty relief is very positive for both the shelf and deepwater drilling programs," he added.

Royalty relief was available for a number of leases in the Central OCS lease sale just held on the first 20 Bcf of gas produced at any well interval deeper than 15,000 ft below the seabed level.

"At the same time, with the favorable discovery rates in deepwater and ultra-deepwater, the oil and gas producers not now operating there have more money to become involved, and many indicate they will do so," he pointed out. Some of this surplus cash flow was reflected in OCS sale interest.

There are good players in the deepwater areas of the US Gulf of Mexico, but "the prospects aren't being drilled as fast as they could be," Dodson said. The US Minerals Management Service is aware of the slowdown in deepwater, and is looking to solve the problem.

"Considering all of these very large discoveries, and the fact that BP is moving to contract a great deal of fabrication capacity (McDermott at Morgan City, Louisiana) in order to further its development opportunities in the Gulf of Mexico, I can imagine that in another three or four months, we might see some conditions similar to those that existed here in the early 1980s. Structural steel and pipe will be stacked up high in preparation for a great deal of development activity in the US Gulf," he said.

One of the current holdups to drilling in deepwater, Dodson said, is how to get the associated natural gas ashore. "We can't really depend on pipeline technology to move the gas economically," he said. Floating technology must pick up the slack in some fashion.

Dodson pointed out the number of wells that are reporting tight hole status, where no information is being issued about well results, depths, and other interesting particulars. Much of this was in preparation for the lease sale, but there is a wider trend development.

"Tight hole status is widespread in the Walker Ridge and Alaminos Canyon areas of the Gulf," Dodson said. "You never hear of much of what is going on, but you know the prospects there are excellent. Our seismic clients are saying very little about these areas, but from the amount of money they're investing in these areas, the geology must be very, very interesting," Dodson said.

What does that mean for the US Gulf of Mexico? "That, to me, is the salvation of the US Gulf," Dodson said.

Why activity is scaling up in the US Gulf

With changes in royalty relief, available funds, and increasing interest from more players pointing toward a drilling boom in the Gulf of Mexico, companies are gearing up to face the coming rigors of active drilling campaigns. Enterprise Oil is fairly representative of that adjustment as a new entrant in the US Gulf.

Alex Herger, Enterprise Oil's Vice President for Exploration, said the number of discoveries and the sizes of the reserves are just two factors that induced her company to staff a Houston office with Gulf of Mexico experts. Enterprise has formed a deepwater team focused on the US Gulf, with the goal of eventually serving as deepwater experts for the company.

Also, she said, the company has been working on getting its foot in the door for potential farm-ins. The prep work, she said, is vital to the company's ability to make solid, speedy decisions on opportunities. Enterprise is always looking to partner-in on good prospects, she said, and that is one component of the company's deepwater program goals. Companies claiming field reserves on the order of 1 billion bbl in the Gulf of Mexico, she said, generates attention.

"There are all these untested prospects out there," Herger said, with lots of companies fighting for equity in the prospects. More companies have the chance to drill in the deeper areas with the rising availability of deepwater-capable rigs, she said, but there are not enough rigs yet.

"It's impossible to drill out all the leases existing now with the existing drillships," she said of the deepwater leases due to expire in 2005 and 2006. "We're getting to the point where there could be a rig shortage."