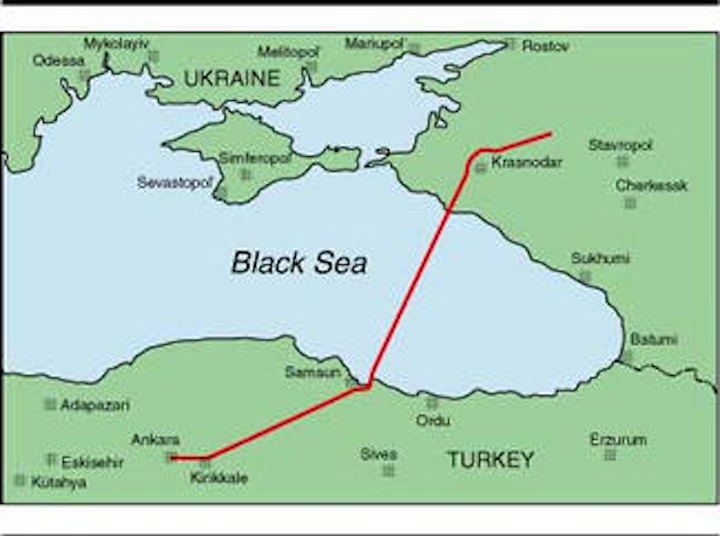 Bluestream, the Gazprom/ENI joint venture long distance gas pipeline between Russia and Turkey, has attracted interest mainly for its planned subsea section, which will be the first attempted deepwater installation in the Black Sea. Pipelay work was due to begin in June, a few months later than had been anticipated, with dredging of the Russian offshore section. The derrick/pipelay vessel Castoro 8 was then scheduled to start shallow water operations by end-July.

Last month, the Saipem vessel S7000 was due to sail through the Bosporous, with its 134 meter high J-lay tower being installed once the vessel reached the Black Sea. Deepwater pipelaying should have started this month, with the first of the planned dual lines likely to be installed by the end of this year. In January, the subsea line will be connected to the onshore pipeline system, with testing expected to be complete by end-March. The second subsea line should then be laid and tested within a few months.

Negotiations for the gas between Turkey's Botas and Russia's Gazprom were concluded in December 1997. There was a last-minute flurry of political regret about reliance on Russia for 70% of Turkey's gas flow, much of it by the military, but the line has widespread support among Turkish businesses that need the gas.

Bluestream represents one of the most challenging projects of its type so far attempted because of the difficulties associated with the design, construction, organization, and logistics, according to a paper at this year's Offshore Mediterranean Conference in Ravenna. The paper was authored by S. Bianchi of Saipem and M. Pulici of Sasp Offshore Engineering. Design issues to contend with along the Black Sea route include geohazards, slope steepness, and a hydrogen sulfide-prone environment.

Saipem's assignment covers design, procurement, construction, and installation of two 24-in. pipelines, respectively 378 km and 383 km long, across the Black Sea in water depths of up to 2,150 meters. The offshore route runs south-west from Tuapse on the Russian Black Sea coast (already connected to the Gazprom-operated transmission grid) to a reception terminal in Samsun on the Turkish side. Incoming gas on the Russian side will first be compressed at a compression station in Djubga. On arrival in Samsun, the gas will be exported through a 48-in. overland line to a gas distribution network at Ankara operated by Botas.

Capacity of the subsea pipelines will be 16 bcm/yr, 25 Mpa, a minimum delivery pressure of 7.5 Mpa, and a design life of 36 years. The 31.8 mm wall steel pipes for the subsea crossing will be laid in J-lay mode by the S7000. In the absence of relevant Russian or Turkish design codes and standards for offshore pipelines, the Bluestream project is being designed using DNV '96 as the primary code.

The subsea pipes' wall thickness conforms to DNV '96 zone 1 and 2 requirements and should remain constant throughout the pipe route. However, for safety reasons it will be critical, the authors stated, to maintain careful control of the UOE effect in order to attain a minimum specified compressive yield strength on the hoop direction of 403 Mpa, to avoid high variability of the load effect.

Geohazards are among the project's more challenging aspects, the authors said. There is potential for interference on both the Russian and Turkish continental slopes from soil slides, massive fluidized flows, and turbidity currents, activated by severe earthquakes. Instabilities could also be generated in the soft superficial layers along and adjacent to the pipeline route.

On the Russian slope, instabilities could affect thin layers of around 3-5 meters as well as the whole stratum of sediments covering the stiff soil. Significant slides leading to mass flow-turbidity currents on the Russian slope could be triggered by 1,000-2,000 year return period earthquakes. The Turkish slope, however, is thought unlikely to develop a significant slide, even under the most severe earthquake scenario.

Mass gravity flows (debris and mud flows and turbidity currents) could occur along either slope. The shelf break of the Russian continental shelf would likely be the main source of mass debris flows caused by seismic accelerations - the most hazardous section stretching from the shelf break to a depth of 600 meters. Resultant debris could impact the pipeline both axially and laterally.

With constraint conditions on the sea bottom affecting pipeline response, loading scenarios have had to be investigated through the analysis of geotechnical/morphological data and the pipeline's equilibrium configuration along the route. The three key sections are assumed to be:

Pipeline response analyses have been conducted against parametrized basic interference events. The results suggest that sealines on the seabed can survive fairly severe soil movements. The most commonly anticipated incident, minor slope movements along the Russian and Turkish slopes, are not considered critical to the pipeline's integrity due to the pipeline's configuration (resting on the seabed or slightly embedded).

In the upper Russian slope, significant spanning will take place. In some locations, a mass flow from a lateral canyon may cause interference, so in these areas, the allowable free span length must be limited to 40-50 meters.

According to the authors, the Black Sea seabed differs from the environments for which existing pipeline corrosion technology has been developed. This is due to a combination of greater depths (down to 2,150 meters), the absence of oxygen, and a high concentration of sulfate-reducing bacteria, hydrogen sulfide, and other types of sulfides not typically present close to subsea pipelines.

To ascertain suitability of pipe material, coatings, cathodic protection, and welding techniques for this project, the seabed sediments and seawater close to the bottom had to be analyzed meticulously. Petergaz, which conducted conceptual and basic design for Bluestream, decided to study the proposed materials' behavior in an externally sour environment, in association with Manchester, UK-based corrosion specialists Capcis.

The latter undertook experiments based on two field surveys concerning the soil and the corrosive species concentration. These led to a lowest measured pH of 6.3. Measurements were also taken of hydrogen sulfide concentration, which showed that the seawater contained up to 11 ppm and the soil up to 1,200 ppm.

Wide-ranging corrosion tests were also applied to steel pipes, welds, coatings, and cathodic protection to ensure safe behavior of the chosen materials. These included small-scale and full ring laboratory tests, as well as small scale, large size, and full ring tests on the Black Sea bottom at 2,150 meters water depth, over a period of three months.

Corrosion tests confirmed that the selected materials were resistant to corrosion (generalized and localized) in the Bluestream environment, and that the chosen coating and cathodic protection approach could protect the pipeline over its entire design life.

Pipe suppliers cooperated in developing a supply specification that ensured proper mechanical properties and corrosion resistance without jeopardizing manufacture of pipes using existing technology. The option that was eventually selected was deemed a reasonable compromise, in terms of the requested corrosion resistance and mechanical properties (in particular, the low temperature toughness) - both for the base material and the welds (longitudinal and girth).