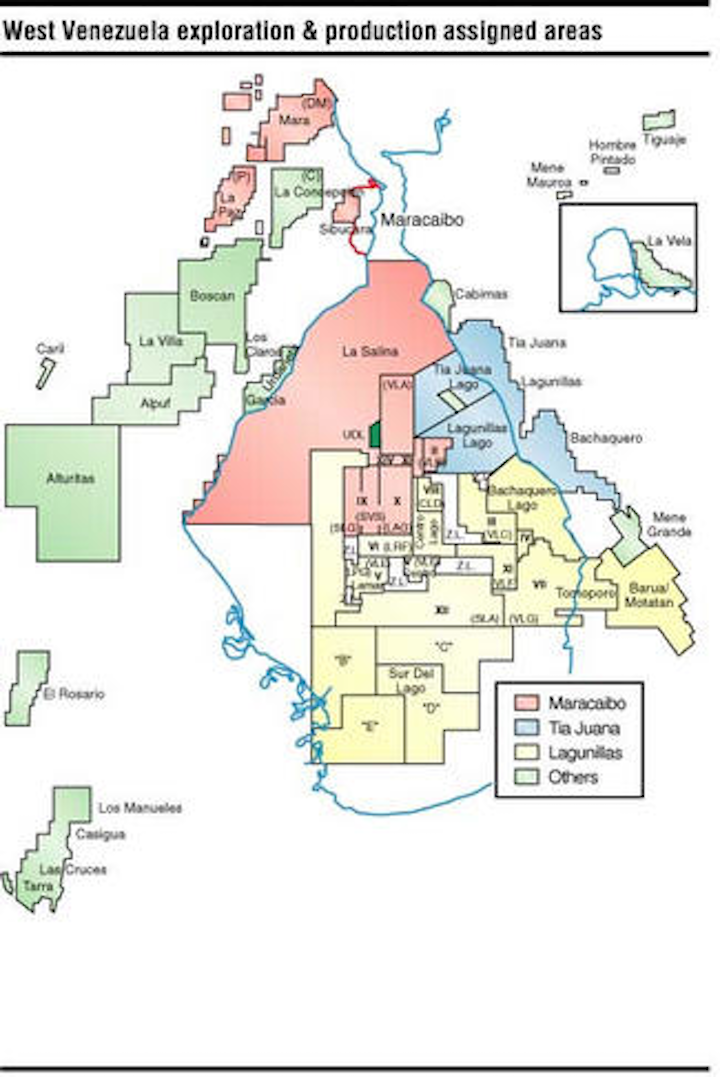 The Cabinas producing field, on a site adjacent to Lake Maracaibo, Venezuela, marks the first oil and gas well drilled in that country. Venezuela has been producing oil since before the last century, and service companies, such as Schlumberger, have been working in this region since the 1920s.

A star in Venezuela's giant portfolio of properties, Lake Maracaibo has produced a number of prolific oil fields for decades. The lake still produces large amounts of hydrocarbons, but a little more reluctantly. The wells are generally depleted and require workover and other production enhancement techniques.

As the focus of exploration and development has shifted to global deepwater areas, many multinational producers have curtailed operations in the lake, selling off prospects to smaller independent operators. This approach is a win-win proposition for both. The majors get out of operating small fields that no longer produce in the range they are comfortable with, and the independents apply production enhancement techniques to further exploit these fields.

In many ways, this trends mirrors what has happened on the outer continental shelf (OCS) of the US Gulf of Mexico. In the OCS, most fields are a mature market. Rather than put the money and effort into revitalizing these smaller fields, the majors are selling them off and using the money to fund high-cost deepwater activities. The thinking in both cases is that while these mature fields may still produce a respectable amount of oil or gas, the prospect for finding new, large fields exists only in the deepwater.

The shift in operatorship has proved to be a boon for small independent operators. Small independents gain access to prime on-shelf leases they could not have otherwise won. The fields may not be prolific, but independents have a lower overhead and can focus attention on reservoir enhancement and other activities to boost declining production. Everyone profits from the move to deepwater, including the national oil company Petróleos de Venezuela (PDVSA) which has a stake in both shallow and deepwater prospects.

While Shell's Del Tana find in the Gulf of Paria offshore Venezuela appears to be very large, most of the country's offshore finds elsewhere are smaller, but far less risky in terms of finding new reserves. This means there is continual interest in the market.

While Pennzoil and Phillips Petroleum are moving out of Lake Maracaibo, a number of smaller companies, many of them domestic, have expanded. Perenco, a French Independent, TechPetrol, Perez Companc, and Dotag are among the independents profiting by the majors' move from the lake to deepwater. Among the major operators still active on the lake are Shell, with the Ambrosia Field, and Chevron, which operates the Bachaquero and L-652 fields on Maracaibo. In some cases, the majors are holding onto these positions for strategic reasons.

These companies want to be in Venezuela and want to do business with PDVSA. In the case of Shell, the company has a field in Maracaibo, but is also operator of the Del Tana project off the country's eastern coastline. The field is very prolific, and an example of how major operators remain active in a country where the prospects are large enough to justify involvement.

In drilling activities, many of the new wells drilled on Maracaibo are being drilled near-balance (between reservoir pressure and fracture gradient) to avoid damaging prospective near-bore formations. The technology to undertake sensitive drilling is necessary to raise production in such low-pressure fields.

On the production side, making the most of the fields on Lake Maracaibo also requires new technology - not only to increase production and access to the reservoir, but to reduce threshhold workover costs.

With smaller field size, there are few alternatives. Jeff Meisenhelder, Schlumberger Business Development Manager for West Venezuela, said just one example of all of the new technology being applied is the IP Anywhere system, which allowsremote interpretation of data from the wellhead.

The system, often powered by batteries or solar cells, screens raw data and transmits information that allows operators and service personnel to monitor critical well and reservoir data, such as production rates, from anywhere. The significance of such data communications is that the best engineering expertise can become involved in smaller projects.

If adjustments are necessary in flow rate, or if zones need to be shut in, the tasks can be achieved remotely. Because the information is available real-time, remote technicians can participate in a wide range of projects without leaving their desks. It is no longer necessary to visit platforms on a regular basis, greatly reducing travel costs. Because the system is standardized and internet-based, it cuts down on the time needed to set up a supervisory control and data acquisition (SCADA) system. Each well is assigned its own IP address so that data can be collected, compiled, and interpreted more efficiently.

In order to raise gas production, not only in Lake Maracaibo but other areas, Venezuela's government oil company, PDVSA, has set out a number of strategic aims:

With regard to the last target, PDVSA developed the Venezuela Liquefied Natural Gas Project. This project is based on the free-gas reserves identified in and to the north of the Gulf of Paria. The goal is to build an LNG plant that could handle 4 million tons of production per year.

The gas will be marketed to the East Coast of the US initially, with the potential for future markets in Mexico, northeast Brazil, and Central America. The goal is to have the initial cargo shipment sometime in 2006. The final decision on capital allocation will not, however, be made until sometime in 2003.