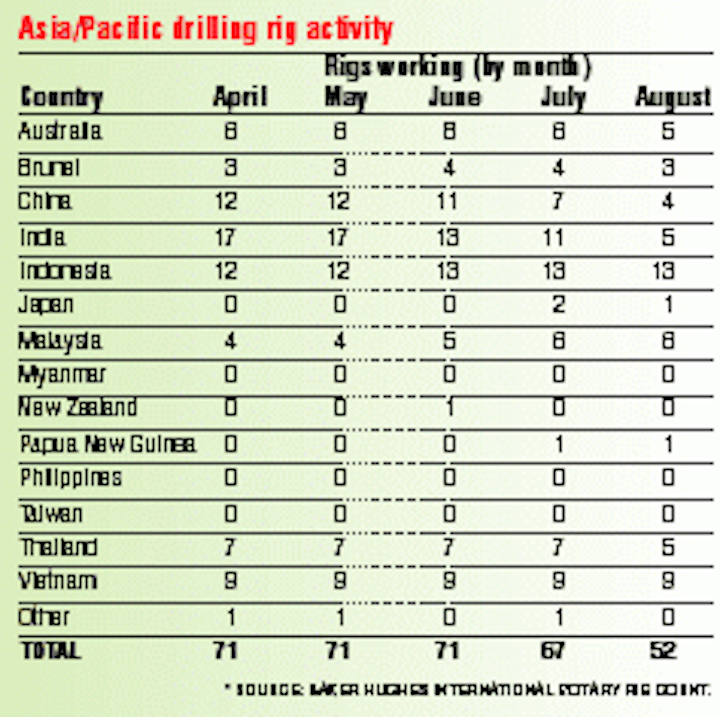 It's premature to say that Asia is rapidly overcoming the economic difficulties of the past few years, but it is definitely recovering. With the 1997 economic collapse and the more recent skirmish in East Timor, it appears the region should have been off-limits to oil and gas industry expansion. But this has not been the case.

Exploration and development activity in the Asian oil sector has remained steady and has even picked up in the past several months. Activity is not quite at the level it was before the economic collapse, but will likely be there after the year 2000.

A prime indicator that the area is still very active, at least on the exploration side, is the Baker Hughes International Rotary Rig Count (which does not include North America). According to the latest rig count at the time of this writing, the Asia/Pacific region had more active offshore rigs than any other region in the world, with the exception of North America. This has been true for the past several months. The Asia/Pacific sector had over 70 rigs working earlier this year, while this number has dipped down to the low 50s, it is still over 15 more active rigs than any other sector.

As far as activity within the region, Indonesia is the most active country. The country's easternmost provinces have been the focus of a great deal of discovery activity over the past year. One of the most active players in the area is Unocal. In the past year the US-based company, with its West Seno and Rapak discoveries, has demonstrated that the area off East Kalimantan is one of the new up and coming deepwater provinces.

But looming in the background of the Indonesian activity is the trouble in East Timor. The region's new claim for independence and the ongoing skirmishes have become a major international issue. For the oil industry, the problem lies in the small province's geographic location in the Timor Sea.

With the declaration of independence, the joint authority agreement for the Zone of Cooperation Area (ZOCA) between East Timor and Australia, a hotbed of activity since its opening in 1990, is apparently now void.

The parties now operating in the area, which includes several international operators, will most likely have to renegotiate with the government of East Timor to continue operations. This includes such major developments as the Elang and Kakatua fields and the Bayu-Undan Liquids Project. However, the turmoil has not slowed exploration activity. Most of the operators working in the area do not see the fighting as a threat to offshore operations.

Australia too has been having a fairly successful year. Last year, the government reported that exploration activities were at record levels and they did not foresee any dropoff during this year, and this seems to have been the case. Several discoveries have been made this past year off Western Australia, including a new deepwater discovery pegged at several tcf by the international WAPET consortium. Other developments are also taking place, including the sanction of Woodside's Legendre gas project, scheduled to be onstream by 2001, and the award of several contracts for the massive Laminaria project.

In addition, Australia has had several successful licensing rounds for almost every basin along its coast and activity should be even higher next year as some of the exploration efforts in these new areas begins.

China has also experienced a fairly productive year, thus far. Phillips has recorded several successful wells in Block 11/05 in the Bohai Bay and has signed on with CNOOC to develop the Xijang oil field in the Pearl River Mouth Basin.

Financially, China also is on the move. State-owned CNOOC has an nounc ed that it will make an initial public offering to finance its activities. In addition, Chevron has pledged the investment of $60 million over the next two years for upstream projects in the country. E&P in other countries has not diminished:

The region does have some difficulties. Even though activity is still relatively strong, the region is still feeling the long-lasting effects of operator cut-backs that are being felt around the world. Like almost every other sector, operators pushed back and cancelled several major projects when the market bottomed-out with the low oil price. And, it seems the operators are not in any hurry to get things back on track, at least in Asia.

To compound this problem, Asia's standing in the overall scheme of things is not very high, where the majors are concerned. When compared to areas such as the Gulf of Mexico and West Africa, the region is much less interesting. In all likelihood, when the operators do begin putting projects back into their budgets, Asia will be further down the list than other areas.

However, the greatest problem the region has faced has been from its own economic crisis, not just from the drop in oil prices. The Asian crisis has left the market for gas in the region all but dry. With most developments in the area being gas-prone, operators have pushed off even more projects due to a lack of gas demand in the Asian market.

However, as Asia makes its way through the final effects of the economic crisis, demand is expected to pick up. This is expected within the next few years. With the region having one of the highest growth rates in the world, demand will soon be on the rise and should surpass levels experienced before the collapse, thus opening several new markets for this gas.

Like the rest of the industry, all hopes for the Asia region depend upon activity next year. Most operators are raising allocations next year for worldwide E&P, and that should translate to more activity in Asia. While operators will probably focus on their high-grade projects at first in areas such as the Gulf of Mexico, West Africa, and Brazil, by mid-year, areas such as Asia should be seeing renewed interest, that is, if the industry and oil prices remain on a stable path.

In addition, analysts are predicting that as far as economic recovery, the region will be back on its feet during the next year and some growth potential during the latter part of the year. Therefore, with economic stability and oil industry stability, the coming millennium could have Asia up and running at full steam again.