Offshore at 60: Remembering the Creole field

On March 18, 1938, production of oil from a well drilled by Pure Oil and Superior Oil in the Gulf of Mexico marked the birth of the offshore industry. A look back at both the Creole platform and others that followed after World War II provides a glimpse of history in the making. 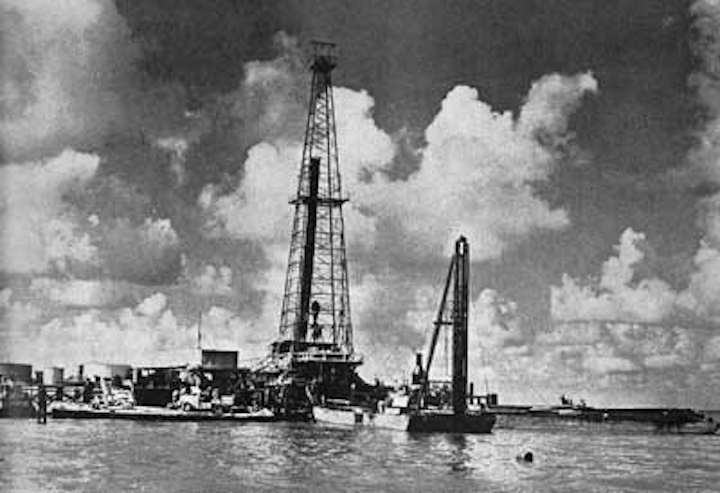 Pioneering platform project dates back to 1938

March 1938 was a memorable month in the history of the oil industry. Though little noted at the time, the first significant oil production took place in Saudi Arabia, heralding the emergence of a new center of globaloil production. On March 18, 1938, Mexico stunned the oil world by announcing the expropriation of the properties of international petroleum companies, planting the seeds for a new era in which major producing nations asserted greater control over their oil. On that same day, production of oil from a well drilled by Pure Oil and Superior Oil in the Gulf of Mexico marked the birth of the offshore industry.

Yet last year, the 75th anniversary of this event went completely unnoted. Indeed, the date generally celebrated as the birth of the offshore industry has moved up nine years to Nov. 14, 1947. That day saw the completion of Kerr-McGee's Kermac 16, some 10.5 mi (17 km) from the shore off Terrebonne Parish, Louisiana. The Chamber of Commerce in Morgan City has commemorated this event with a historical marker that reads: "THE FIRST OFFSHORE OIL WELL: First producing offshore oil well out of sight of land was completed Nov. 14, 1947 in the Gulf of Mexico forty-three miles South of Morgan City, Louisiana." To the obvious criteria for "offshore," that is – in the open sea and unattached to land – was added a new qualifier, "out of sight of land." A look back at both the Creole platform and others that followed after World War II provides a glimpse of history in the making. It also suggests how difficult it has been to examine the vast changes in this formative era of offshore history and sort out who was responsible for what and when "landmark" anniversaries should be celebrated.

I came across accounts of the Creole field's pre-war development while co-authoring a book sponsored by Brown & Root and published in 1997 to help celebrate the 50th anniversary of the completion of Kermac 16. The first mention I saw of the Creole platform was in anOffshore article from October 1963 with the headline "First Well in Gulf of Mexico Was Drilled Just Twenty-five Years Ago." The fact that Brown & Root had built the platform, just as it later built Kermac 16, caught my attention. But I also stopped to think about this statement on the platform's historic significance: "It marked the oil industry's first attempt to acquire the sea legs which are now carrying it out to the edge of continental shelves around the world."

These legs were made of wood, not steel: 140 creosoted timber pilings, each 60 ft (18 m) long and driven 27 ft (8 m) into the ocean floor supported a large wooden deck measuring some 180 x 320 ft (55 x 98 m). On the platform was equipment needed to drill, but no quarters for workers. It stood in water only 14 ft (4 m) deep, and it was only a mile and a half or so from the shore. Yet these numbers do not call into questionOffshore's report that the Creole platform was "a pioneering project of the highest order." Indeed, 14 ft was well beyond the record for offshore production unattached to land, which then stood at zero. Building and operating this platform required the companies involved to find creative ways to find, drill, and produce commercial quantities of oil out in the open sea.

They used tools first developed for use onshore. Brown & Root, Pure Oil, and Superior Oil – led by Pure's I.W. Alcorn – made the most of the tools at hand. They built the first offshore platform working out in the water in a process given the descriptive name "stickbuilding." Whatever they needed came by boat to the site; whatever had to be done, they figured out how to do it by bringing equipment such as pile drivers out to sea on barges. When tools dropped into the ocean, they dived down and retrieved them. They used wood to build the structure because they knew how to build with it. Wood also was the least expensive option for constructing a drilling platform that could not be moved once it had been built, and would have to be written off and abandoned if it did not find oil at its original location.

With almost no guidelines on the wind and wave forces that a hurricane might exert on the platform, designers used onshore design standards to estimate wind forces on this offshore structure. With no systematic data on how high to place the deck above the ocean to avoid destruction by the storm surge from a powerful hurricane, they opted for a creative approach, and designed the deck of the platform to wash off during big storms. This allowed the owners to protect the extensive piling system and reconstruct the decks if need be. The location close to the shore meant that equipment could be removed when a major storm threatened. The platform had no quarters for workers; when a storm threatened, the workers simply did not go to work. Proximity to shore also allowed the company to ship oil to shore through a small diameter pipeline instead of relying on the barges generally used in the early years offshore.

Despite its nearness to shore, the Creole platform faced difficult transportation problems. Although 1.5 mi (2.4 km) out in the ocean as the pelican flew, the platform was approximately 10 mi (16 km) from Cameron, Louisiana, the nearest onshore town in the region. From there, the company shipped supplies and equipment and ferried workers to and from the platform. Workers faced an often difficult commute, traveling 1.5 to 2 hours each way in rough rides on old shrimp boats. In choppy seas, the boats might finally reach the platform only to find that workers could not be safely transferred from the boat to the deck. They then had no option but to return to shore.