Mapping US Gulf of Mexico salt with marine magnetotellurics 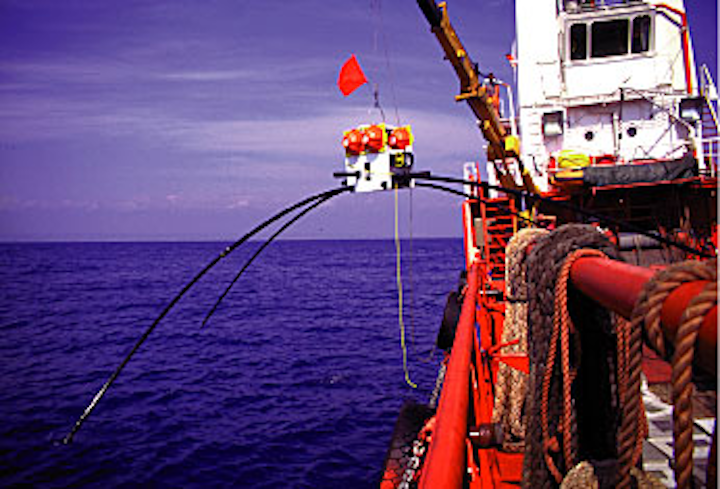 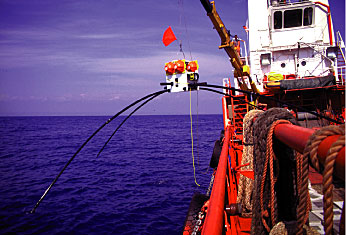 SIO seafloor magnetotelluric data logger going over the side of the survey ship in the Mediterranean.

A demonstration survey was run over the Gulf of Mexico Gemini prospect during June 1997. The Gemini salt structure is a complex 3D salt body with a subsalt oil and gas discovery by Chevron and Texaco. This survey represents the first successful MMT survey conducted in the Gulf of Mexico for petroleum exploration.

Magnetotellurics (MT) is a technique that measures orthogonal components of electric and magnetic fields, which are produced by interactions between the solar wind and the earth's ionosphere. These measurements provide estimates of the earth's electromagnetic impedance. This impedance is used to estimate the earth's electrical parameter, resistivity, much as measurements of the seismic impedance provide estimates of seismic parameters velocity and density. (A review of the method can be found in Orange, 1989).

The seafloor instrument weighs approximately 150 kg and is easily transportable. The instrument can be deployed with or without the magnetic field sensors. This allows considerable flexibility in survey configurations.

The instrument is configured as a complete MT site with orthogonal E (electrical field) and H (magnetic field) measurement capability. The 5-meter electrode arms are detachable for shipping and onboard handling of the system. (Constable et al gives a detailed description of the system).

The interpreted top and base salt surfaces from a 3D depth migrated volume were used to generate a 3D finite difference numerical model (Mackie, 1993) of the salt which incorporated the 1 km of seawater over the prospect. The numerical MT data was used in an extensive experiment design phase.

Inversion tests on the numerical data showed that data between 0.1 Hz and 0.01 Hz were critical to base salt resolution. In addition, numerical tests showed that 2D inversion of the data should provide reasonable accuracy on the base salt.

The survey design study guided the placement of the survey line that ran nearly SW-NE. At the southwest end of the line the salt is very thin (less than 300 meters) and deep (5 km). In the middle, beneath sites 10-12, the salt thickens to approximately 2 km and terminates just northeast of site 12.

Previous experiments over Gemini in 1996 showed that instrument motion due to bottom currents could significantly degrade the magnetic field signals, so large 200-kg anchors were employed in the 1997 survey, resulting in greatly improved data. Twenty-four hour recording times were used at each site with some variations due to the logistics of multiple deployments and recoveries. Overall data quality was high and comparable to land data surveys.

Impedances generated using electric fields orientated along the line direction (perpendicular to local strike) and orthogonal magnetic fields were used in the data interpretation. These impedances were used for 2D inversion of the data.

Previous numerical modeling of salt structures (Hoversten et al., 1998) showed that 2D inversions of potential 3D data are most accurate if only the electric field perpendicular and the magnetic filed parallel to local strike are used to define the electromagnetic impedance. The frequency range used was from 1.000 to 0.001 Hz.

To test the relative performance of algorithms and provide enhanced confidence in the data, we used four different 2D MT inversion algorithms. They included: The first three algorithms produce models that are smooth, both vertically and horizontally. All were started from a 0.7 ohm-m half-space with no a-priori information used as constraints. All three smooth inversions provided very consistent models showing: It was reassuring that three different algorithms gave very similar pictures and that they indicated the presence of a confined salt body in the correct location. However, the smooth inversions provide a fuzzy base salt picture, which must be interpreted with the aid of inversion tests on numerical model data.

In order to improve the resolution of the base salt we used some of the constraining features of the Occam2D algorithm and used the SBI algorithm in additional inversions.

The Occam2D inversion had the smoothing constraints eliminated across the location of the top salt. This allows the algorithm to place high resistivity salt next to low resistivity sediments at the top salt boundary.

The 2D SBI inversion model parameters are designed to accommodate sharp contrasts in resistivity across boundaries and thus eliminate some of the ambiguity in interpreting smooth inverse models. Rather than characterizing the model in terms of blocks of unknown resistivity, the SBI inversion describes the model in terms of vertical node locations of boundaries between layers and resistivities of the layers.

Because the SBI is characterized by layer boundaries, a starting model with the appropriate number of layers is required. In this case, the results from the smooth inversions were used as a guide in building the SBI starting model. In particular, a near-surface resistive layer was indicated.

Beyond site 12, where the seismic showed no salt, the base salt layer was moved to coincide with the top salt and its location was fixed. This effectively eliminated the salt layer to the northeast of site 12.

The near-surface resistive layer was set at a constant thickness and only its lateral resistivity was allowed to vary. The top salt was well determined by the seismic, so its location was fixed in the inversion.

One of the features of the SBI inversion is the ability to fix, constrain, or link parameters in the inversion. All these serve to reduce the possible variations in the model. For the Gemini data the sediment resistivities beneath the salt and the resistivities in the deepest (more resistive) layer were linked together so that these layers had constant resistivities laterally.

In addition, the salt resistivity was fixed at 10 Ohm-m. This is justified because the MT response saturates as the resistivity of a body becomes greater than 10 to 20 times that of the background.

In the Gulf of Mexico, bulk salt resistivities are greater than 20 times the background sediment resistivities. The MT response is totally governed by the distortion of electric currents in the sediments around the resistive salt. There is no contribution from induced currents within the salt itself. This greatly reduced the number of parameters needed in the inversion.

The SBI placed a base salt interface within a few percent of the 3D seismic pick down to a depth of 5 km. Below 5 km, where the salt is thinnest, the SBI inversion is responding to thicker salt just to the north-west of the survey line.

In addition to the base salt, the inversions of the data indicated the presence of a deep resistive zone which could correspond to Cretaceous sediments. The experiment was not designed to acquire the low frequency data needed to accurately position this deep resistor. Longer recording times would be necessary to improve data quality below 0.001 Hz where deeper-structure information is contained.

The 1997 Gulf of Mexico MMT survey represents the first successful survey of its kind. The survey was successful in acquiring high quality seafloor MT data and in interpreting of the resulting data.

The inverse models, which fit the observed data, are of sufficient fidelity to answer significant exploration questions about the shape and location of base salt structures. In addition, the Gemini models offer the tantalizing potential of providing information about the deeper structure of the Gulf.

The technology is moving into commercialization. The consortium plans two additional test surveys in 1998, one in the North Sea to image the base of basalt structures and another in the Gulf of Mexico.

The authors are grateful to the Marine Magnetotelluric consortium, in cooperation with the U.S. Department of Energy, Office of Energy Research, Office of Laboratory Technology Research under Contract DE-AC03-76SF0098, for their support of this research.

The authors would also like to thank Mary Ann Mulrey and Ransom Reddig of AOA Geophysics and Clark Scott and Diane Gievers of Engineering Geoscience UC Berkeley for their work in data acquisition and processing. Electromagnetic Instruments Inc. supplied MT acquisition systems for the survey.