Statoil and its partners have opted for an unmanned wellhead platform for the latest phase of the Oseberg field development in the northern Norwegian North Sea. The Oseberg Vestflanken 2 facility is the first of its type for an incremental project on the Norwegian shelf, designed for fully remote operation from the outset from the Oseberg field center 8 km (5 mi) to the southeast; and ultra-minimal in terms of onboard equipment, with no utilities, helideck, or lifeboats. 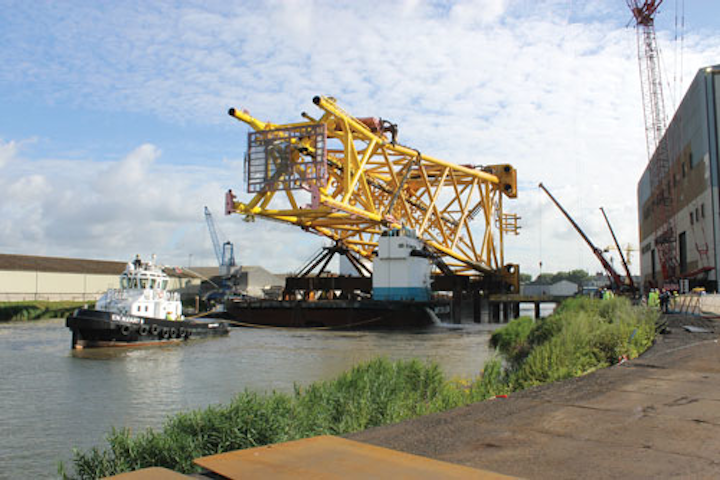 Statoil and its partners have opted for an unmanned wellhead platform (UWP) for the latest phase of the Oseberg field development in the northern Norwegian North Sea. The Oseberg Vestflanken 2 facility is the first of its type for an incremental project on the Norwegian shelf, designed for fully remote operation from the outset from the Oseberg field center, 8 km (5 mi) to the southeast; and ultra-minimal in terms of onboard equipment, with no utilities, helideck or lifeboats.

UWPs are common in other parts of the North Sea, particularly the southern gas basin fields in the Dutch and Danish sectors, due to the combination of much shallower water and sprawling production complexes better suited to swift tie-ins of minimal platforms. The five existing unmanned, or normally unmanned, installations in the Norwegian sector at Embla, Hod, Huldra, Sleipner Vest and Tambar are larger, more complex facilities in deeper water and harsher environments.

Heerema Fabrication Group (HFG) constructed the new platform entirely in covered halls at its yard in Zwijndrecht, the Netherlands: the 900-metric ton (992-ton) topsides is 25 m (82 ft) long, 23 m (75 ft) wide and 20 m (65.6 ft) tall, while the 4,400-metric ton (4,850-ton) jacket is 138 m (453 ft) tall with a footprint of 36 x 36 m (118 x 118 ft). HFG completed assembly this June, 16 months after winning the engineering, procurement, construction, transportation, and installation (EPCI) contract in February 2016. Heerema Marine Contractors’ construction vesselHermod subsequently installed both structures in swift succession at the Oseberg field location. Leading up to the award of the EPCI, HFG performed a series of studies for Statoil for an unmanned dry tree wellhead platform for Oseberg Vestflanken 2 and won the subsequent front-end engineering and design (FEED) competition.

Norsk Hydro masterminded the original Oseberg field development that came onstream in 1988 through three bridge-linked platforms on the southern part of the field, with a fourth platform added 14 km (8.7 mi) to the north. Produced oil and condensate are exported through the 115-km (71.5-mi) long Oseberg Transport System pipeline to the Sture terminal in western Norway: all produced gas is re-injected.

In 2013 the partners were looking at alternative options for an incremental development on the field’s west flank, mindful of the fact that subsea production system and subsea well intervention costs offshore Norway had tripled over the past decade, with market forecasts at the time indicating further cost escalation. The following year Statoil commissioned several contractors to perform a conceptual study for an unmanned dry tree wellhead platform for Oseberg Vestflanken 2, and this emerged as the preferred solution for the plan for development of operation that Statoil submitted to Norway’s authorities in late 2015.

At the time the Norwegian Petroleum Directorate applauded the choice, having earlier commissioned Danish engineering group Ramboll Oil & Gas to investigate the pros and cons of unmanned wellhead platforms versus subsea production on the Norwegian shelf, based on experiences elsewhere in the North Sea, the Gulf of Mexico, and offshore Iran. The conclusion was that unmanned facilities could be more viable in certain cases in Norway, depending on the size of the field, water depth, and availability of nearby offshore infrastructure.

During 2014-15 HFG performed a series of studies for Statoil and the company’s own FEED for the design competition formed the basis for its subsequent EPCTI tender. Following the contract award in February 2016, HFG and Statoil spent the next four months jointly working on a ‘lean’ engineering concept for the platform, focused on ‘fit for purpose’ engineering, safety in design, and incorporating Statoil’s best practices for operation and maintenance as applied to the company’s other offshore projects. Construction then started in June 2016.

According to HFG, building the platform based on an in-house FEED had facilitated a swift start to the procurement process, as Statoil had stipulated a fasttrack program. HFG operates two main yards in the southern Netherlands, with the facility at Vlissingen normally used for jackets. In this case, however, undertaking the detailed design, procurement and construction in Zwijndrecht proved a major advantage for the project and the schedule, according to HFG’s CEO Koos-Jan van Brouwershaven.

“Previously HFG had built a variety of (normally) unmanned facilities for Dutch and UK North Sea projects,” he explained, “so the company was familiar with the EPCI needs for this type of facility. For the platform to be able to operate unmanned, without manual intervention and with minimal maintenance, the design of the various structures had to be robust, with, for instance, extensive use of corrosion-resistant alloys. Multiple walk-to-work access locations have been incorporated to allow a support vessel to draw up alongside at various headings, with a gangway for maintenance personnel to cross to and from the platform during periodic visits.” (During the conceptual phase, Statoil stated that it was looking to restrict work by maintenance crews to short campaigns per year, to be performed in optimum weather conditions).

“The Vestflanken 2 platform has no processing facilities nor the utility systems typically found on manned platforms,” he continued. “It will be operated and controlled remotely from the Oseberg field center, with all required electrical and hydraulic power and chemicals imported from the field center via a subsea umbilical. The platform does have an onboard crane to facilitate well servicing operations and the transfer of equipment supporting maintenance activities.

“Remote control was a key focus during the design, and the control and protection systems were developed in co-operation with Statoil’s team from the field center. The process of control and shutdown of the Vestflanken 2 platform and its wells is identical to remote operation of a subsea template. In addition, the design allows the platform and wells to be shut down locally if and when personnel are onboard. State of the art monitoring systems, including CCTV, allow operators to monitor the platform at all times from the field center.”

The conductors for the 10 wells are centralized in the platform for maximum protection. The platform is ‘rotated’ 45° with respect to the wellbay to allow a jackup to approach closely, while retaining sufficient clearance for the rig’s spud cans.

The 10-slot platform, which has a 25-year design life, should start operating next spring. Two of the wells will be gas injectors to boost oil recovery from the Vestflanken, with further gas imported via a new 9-km (5.6-mi), 10-in. pipeline connected to the existing gas injection system in the area. The wellstream will head to the Oseberg field center via a new 7.5-km (4.6-mi), 14-in. subsea pipeline: over time, Statoil expects the new facilities to deliver at least 110 MMboe, comprising 62 MMbbl of oil and 7.8 bcm of gas, from reservoirs at subsurface depths of 2,400-3,100 m.