A team from Heriot-Watt University claims that the carbon dioxide storage potential of the proposed Captain Sandstone site in the Moray Firth offshore northeast Scotland has been overstated. 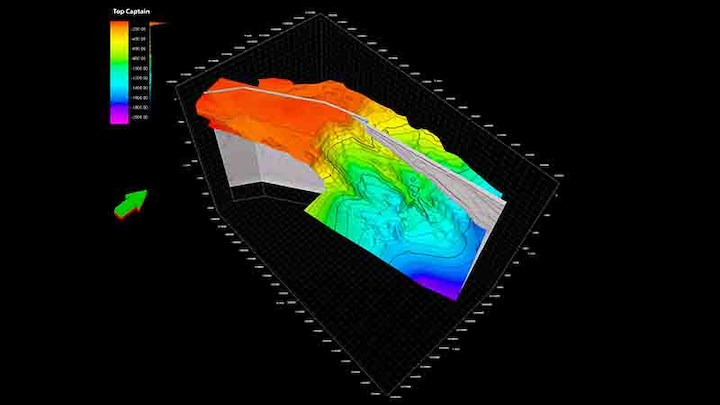 EDINBURGH, UK – A team from Heriot-Watt University claims that the carbon dioxide (CO2) storage potential of the proposed Captain Sandstone site in the Moray Firth offshore northeast Scotland has been overstated.

A paper in this month’s Interpretation, published by the Society of Exploration Geophysics and American Association of Petroleum Geologists, detailed how the uplift, tilt and resultant fracturing of the UK’s subsurface in the Early Cenozoic age, around 55 million years ago, could impact plans forcarbon capture and storage.

“Given the perceived scale of the challenge and the amount of CO2 that needs to be sequestered to stabilize or reverse emission levels, the geological focus has largely been on regional saline aquifers because of their lateral continuity, gross rock volume, and large storage capacity.

“However, it is essential that the right site is chosen to prove the potential of this technique and demonstrate that CO2 can be safely stored and will not leak to the surface. Poor site selection and gas leakage will undermine the credibility of geological storage.”

For the past seven years, he pointed out, the Captain Sandstone saline aquifer buried beneath the Moray Firth has been viewed as having the potential to store between 15-100 years of CO2 output from Scotland’s power industry.

But research at Heriot-Watt suggests this is the wrong exemplar to choose, Professor Underhill said, because the tilt of Britain leads to it rising to sub-crop the seabed, with few barriers to arrest gas escape, and this has caused fault reactivation.

“If leakage occurs, which the geology suggests it will, then the case for CO2 storage will be weakened and potentially undermined.

“We should be focusing attention on sites where CO2 has been found already as that proves that the trap and seal works on geological time scales. Although these sites are the exploration disappointments of the oil and gas companies, they present a clear opportunity for carbon storage.

“Our findings lend further weight to the importance of greater investment in geoscience research and education and of undertaking robust and forensic geologic screening of any prospective storage sites prior to injection.”

Interpretation of the seismic data suggested that the 120-million-year-old Lower Cretaceous Captain Sandstone Member is a continuous, interconnected reservoir that rises to subcrop in the western areas of the basin, due to Early Cenozoic uplift and tilt.

The aquifer therefore forms an open system with few barriers or sizable closures to arrest or entrap light fluids and gases en route to the western subcrop.

The saline aquifer appears to be cut by several west-southwest/east-northeast-striking reactivated normal faults. Although migration along the faults permitted hydrocarbons to penetrate structurally elevated traps, such as the offshoreCaptain field, some faults also breach the seal of the Captain Sandstone Member aquifer, rise to the seabed and increase the risk of seabed leakage.

Despite the area’s large storage capacity, the team concluded, the dip, subcrop and fault reactivation suggests it lacks integrity as a potential storage site.