TGS’ main offshore seismic acquisition program during 1Q has been in the Mexican sector of the Gulf of Mexico. 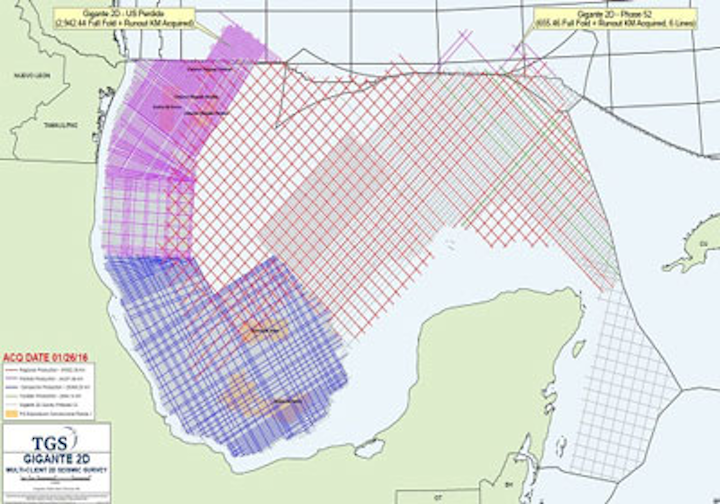 ASKER, Norway – TGS’ main offshore seismic acquisition program during 1Q has been in the Mexican sector of the Gulf of Mexico.

TGS also plans line ties to its regional grids over the US side.

Up to five vessels have worked on Gigante 2D, and by the end of 1Q, more than 120,000 km (74,564 mi) of 2D data had been compiled. The majority has already been delivered to clients as fasttrack data.

At the same time TGS has been acquiring the Gigante multibeam, coring, and geochemical survey over a 600,000-sq km (231,661-sq mi) area. This started in Mexican waters late last year with coring operations starting during 1Q 2016.

The project is expected to be completed during 4Q. Interpreted data will be integrated with results from the 2D survey.

TGS anticipates a decline of 20-30% in E&P spending internationally this year following a similar reduction in 2015, and adds that themarket for seismic data is set to remain weak for the time being.

Oil companies will likely prioritize their seismic spend in areas with more favorable economics and payback times, it adds, and in regions where they have current work programs and license obligations.

As a result, the company expects a drop of more than 50% in multi-client investments this year, with oil companies less willing to pre-fund new surveys. But clients should also benefit from substantially lower average vessel day rates.