Statoil has contracted Reef Subsea Norway to install a permanent reservoir monitoring system at the Grane field offshore Norway. The full seismic subsea installation contract includes engineering, logistics and material, mobilization/demobilization, and installation of an umbilical riser, sensor array terminators and lead-in cables, sensor array cables, and protection structures. There will be almost 200 km (124 mi) of seismic cables installed and buried across 50 sq km (19 sq mi) of seabed in 130 m (426 ft) of water. Installation, set to occur in 2014, will employ thePolar Prince, Reef Larissa, and Reef Subsea's new plow and dredging device. Geospace Technologies Corp. executed the definitive agreement for Geospace to provide 660 km (410 mi) of seabed seismic reservoir monitoring systems for the Snorre and Grane fields on the Norwegian continental shelf. The final contract value is approximately $160 million and requires the systems to be delivered at various intervals extending into 2015.

TGS has arranged for three vessels to work on its 3D multi-client seismic program offshore Europe this coming summer. TGS signed a letter of intent with Fugro-Geoteam to charter an eight-streamer seismic vessel starting in April and lasting an estimated five months. TGS also has signed a letters of intent with CGGVeritas Services to charter a 12-streamer seismic vessel and DolphinGeophysical AS to charter the newbuild 16-streamer M/V Sanco Swift.

TGS will not be the only one acquiring seismic data offshore Europe this year. The Dolphin Group saysDolphin Geophysical has won several contracts for seismic work in the North Sea. Dolphin has awards for both 3D and 4D projects that will use three of its vessels for as long as a year.

A first 3D seismic campaign over the shallow-water sector of the Neptun block in the Romanian Black Sea started in January.CGG Veritas' Oceanic Champion vessel is performing the 60-day program, which will cover an area of 1,600 sq km (618 sq mi). The vessel is deploying eight 6-km (3.7-mi) long streamers over a 100-m (328-ft) width. Exploration in the shallow water part of Neptun started before 2005. To date two wells have been drilled (neither led to commercial discoveries), and 2D seismic has been acquired. OMV Petrom operates this part of the block. ExxonMobil farmed into 50% of the deeper water portion in 2008. Here the partners are shooting the largest 3D seismic program to date over the Black Sea, OMV Petrom claims, covering roughly 6,000 sq km (2,317 sq mi).

In the Norwegian Barents Sea,SeaBird Exploration and Searcher Seismic Pty. are working together on a multi-client 12,000-km (7,456-mi) Snøspurv 2D high-resolution seismic survey over Bjarmeland Platform. Work is expected to start next spring and take four months to complete. The platform area consists of play types already proven in other parts of the Barents Sea. It will specifically target the prospective Triassic/Jurassic sections to the south and west, and the Carboniferous/Permian and Triassic section in the northern part of the survey area. No exploration wells have been drilled on the Bjarmeland Platform, which covers an area of almost 35,000 sq km (13,513 sq mi). The survey results should also provide the necessary link for regional interpretation into the southeastern Barents frontier region, due to open soon for exploration. Data will be available for participating companies from 3Q 2013. 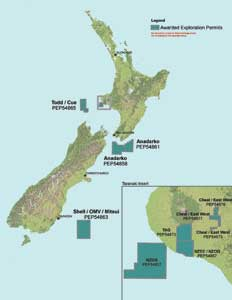 New Zealand Petroleum & Minerals has closed Block Offer 2012 and awarded 10 exploration permits, five of them offshore. The work associated with exploration on the permits is valued at $82 million, and could reach $776 million if the permits run the full five years. Offshore permit winners are as follows: