The expense of frontier exploration in deeper waters and areas with little infrastructure, and the value of residual oil in existing fields, are among the drivers of seismic technology development. 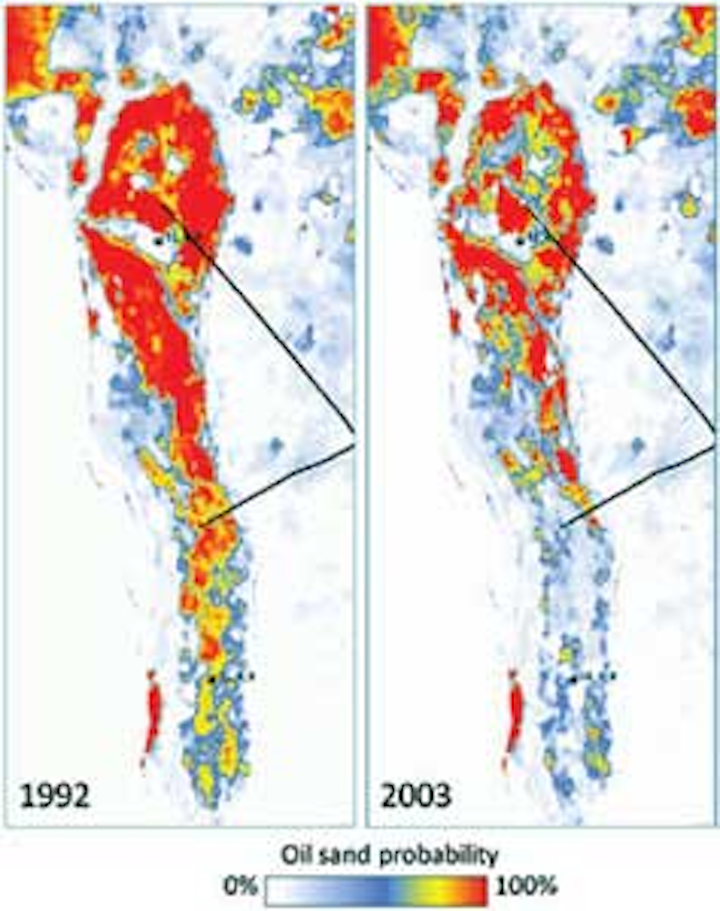 The expense of frontier exploration in deeper waters and areas with little infrastructure, and the value of residual oil in existing fields, are among the drivers of seismic technology development. The increasing acceptance and application of 4D seismic techniques in both exploration and production indicates that time-lapse 3D exploration and reservoir monitoring are coming of age as tools to de-risk drilling and to maximize the return on investment of field development.

Application of the technology is not new; neither is it typical. A number of 4D seismic projects have been conducted and are planned in a variety of locales. The North Sea, particularly Statoil-operated production, and offshore Africa are two active areas for 4D seismic work.

In the North Sea, a full-scale permanent reservoir monitoring program is in Ekofisk field. The CGGVeritas installation covers 60 sq km (23 sq mi) in 70 m (230 ft) of water using 200 km (124 mi) of seismic cables trenched to a depth of 1 m (3.2 ft) with surveys repeated twice a year.

The North Sea has seen some longer-term 4D projects. Statoil is one North Sea operator which has taken 4D to new levels and the company says it has moved from qualitative to quantitative time-lapse seismic to produce saturation maps of reservoirs.

Most recently, Statoil hired Reef Subsea Norway to install a seismic system on the Grane field on the Norwegian continental shelf. The work scope covers installation of a permanent reservoir monitoring system. Current plans are to install and bury 200 km (124 mi) of seismic cables with a receiver to cover about 50 sq km (19 sq mi) in 130 m (426 ft) water depth. The purpose of the monitoring system is to increase the recovery of heavy oil from the field. Installation is scheduled to take about 100 days in 2014. Engineering already is under way at Reef Subsea's Bergen, Norway, office.

Statoil's quantitative work integrates data from seismic, coring, downhole in wells, production, and simulation. It proved valuable in improving recovery from Statfjord and is being done for Gullfaks. Statoil's next step is to link the 4D seismic results to flow simulation to improve forecasts of reservoir behavior.

In an earlier instance, injection of CO2 into a saltwater-saturated sand was monitored for five years. The ability to model future reservoir characteristics and fluid contacts based on 4D experience proved a useful reservoir management method.

Total Exploration & Production Angola signed in 2Q 2012 a five-year-long contract with CGGVeritas to process and image 4D seismic data offshore Angola across five deepwater fields. This follows 4D acquisition, data processing, and reservoir characterization done by CGG for Total in the same area during the past several years. In combination, the fields to be covered, Girassol/Jasmin, Rosa, Dalia/Camelia, Pazflor, and CLOV, cover about 2,300 sq mi (6,000 sq km). The services under the contract include acquisition and interpretation of fasttrack, base, and monitoring data.

Bowleven had ocean-bottom cable 4D seismic across parts of the Etinde permit offshore Cameroon, covering the IE and IF fields and resulting in improved imaging through the IF's gas chimney and the IE's volcanic carapace. That data was fed back into an existing dynamic field model to help define locations for subsequent appraisal drilling. The operator and partners expect to make a final investment decision in the first half of this year and get first production in 2016.

RXT has done seabed seismic acquisition offshore Nigeria for a variety of operators using cables fixed on the seafloor and holding a hydrophone and set of geophones. RXT says its experience shows that 4D acquires both compression data and converted shear wave data volumes.

PGS has installed the first permanent seabed seismic monitoring system in waters deeper than 1,000 m (3,280 ft) offshore Brazil in Jubarte field for Petrobras. Using PGS' Optoseis fiber-optic system, the seabed installation consists of 35 km (22 mi) of sensor cable and 700 four-component sensors. In 3Q 2012, PGS and Petrobras celebrated completion of the project as the largest-ever 4D acquisition. Over a period of 45 months, PGS'Ramform Sovereign sailed the equivalent of 3½ times around the equator. Fourteen cables, each 8,100-m (26,568-ft) long studded with electronics were towed in formation, 50 m (164 ft) apart for a total of 113,400 m (3731,952 ft) of streamer cables. The array was in the water continuously for 9½ months.

PGS predicts it could have as many as 2,200 km (1,367 mi) of permanent reservoir monitoring sensor cables installed by 2015.

The Oil and Natural Gas Corp. Ltd. of India has notified SeaBird Exploration PLC of an award for a 4C-3D Seismic API Pilot Project in Mumbai High field offshore India. The data is to be used by ONGC for planning placement of two development wells. The project called for theHugin Explorer and Munin Explorer to deploy more than 2,300 ocean bottom nodes at intervals of 200 m (656 ft) for data acquisition. Acquisition will be in two swaths by rolling phases of 760 nodes each. The contract is valued at $40 million and the duration is estimated at 110 days.

The value of 4D seismic when properly applied continues to grow. New acquisition techniques, processing advances, and practices are the reasons for the technology gaining value. The growth from qualitative tool to quantitative reservoir management tool has come over a short time span, too.

Simply stated, 4D seismic adds the element of time to the traditional 3D seismic acquisition regime. In short, while 3D is a snapshot, 4D is a movie. This ability to "see" into the reservoir over time is what has led to monitoring reservoir structure during production and has resulted in the potential to identify depleted or untapped zones. The ideal 4D survey exactly tracks the trail of a baseline survey in order to make the results as exactly comparable as possible. It is this comparison of results that generates a simulation of how a reservoir is acting. This repetition can be achieved in two ways. Careful planning, multi-vessel operations, and streamer steering work with towed applications. The other method is permanent seabed installation of sensors. The mass of data produced is made even more valuable by modern interpretation methods.

The specific advantages depend upon the development stage of a field. The benefits range from more successful well siting to shortening the time to production to extending the producing life of the field.

At the front end, 4D can help place a new well in the optimal spot by indicating how the reservoir is likely to perform. It also can stretch the production time between initial completion and uneconomical water saturation. In a field under development drilling, an eye on 4D data can help determine how the reservoir is acting to improve the placement of each successive well. It also can help in tapping productive partitions within a field that otherwise would not flow.

In older fields, 4D seismic can help locate unproduced hydrocarbons. Assessment of the remaining hydrocarbons can determine if additional drilling is cost-efficient. Locating fluid fronts in older fields can alert the operator to expected breakthroughs.

Another interesting benefit that can come from a 4D program lies in providing a way to adjust a 3D reservoir model during production. This can be used to validate the model algorithm itself for future applications, as well as to fine-tune the model of the reservoir under study. The technology is dynamic and gives a spatial indication of fluid movement that can be used in the generation of flow properties to de-risk many reservoirs.

Even though 4D has been used for a decade or more, recent advancements make it more informative. The technology still has to contend with many of the factors that influence the usability of most other seismic techniques, such as towed-streamer noise, water current changes, metocean influences, limited access due to existing structures, and remote locations. The use of permanent installations ameliorates many of these and also obviates the need for exact retracing of the streamers over the previous survey patterns.

Survey pattern is now an object for research and development, too. One example is the use of improved streamer controls to duplicate a previous survey pattern. Position accuracy and calibration of both the receiver and source are necessary for towed-streamer 4D. Permanent instrument installations make the receiver position question moot.

Integrating 4D seismic with well logging and production data has shown that it is possible to monitor effectively the movement of fluids over time.

Analysis can differentiate between drained portions of a reservoir and portions retaining fluids to identify remaining potential production and map reservoirs with fault-bounded production strata.

One major area of work involves the use of fiber optics to get better data faster. Fiber optics has several advantages for subsea use. For one, the number of channels per fiber is high, making more data points possible with a smaller and lighter weight umbilical than is otherwise possible for comparable data returns. No electricity is needed at the sensor in a fiber-optic system, removing one power demand and potential hazard. All the electronics can be at the surface rather than underwater, enhancing dependability and instrument life.

Suppliers are bringing other new tools to the field. ION Geophysical Corp. has released a redeployable seabed seismic acquisition system that also can operate at a greater water depth than before, as much as 2,000 m (6,560 ft). ION says the system, dubbed Calypso, can handle any number of longer-length cables and with better productivity. In addition to the added depth capability, ION's microelectromechanical system (MEMS) based sensors can populate the cable with as many as 480 sensors per array. Continuous recording can be done in a buoy at the surface to eliminate the requirement of a recording vessel.

CGGVeritas has more than 1,000 ocean-bottom node units and has a proprietary system for ROV deployment and recovery that can be used under platforms or other infrastructure.

TGS-NOPEC's Stingray Systems is working on a fiber optic sensor array capable of seismic and microseismic measurements from a permanent installation in 3,000 m (9,840 ft) water depth. Stingray is working with Atlas Elektronik UK, VerdErg Connectors, and the Optoelectronics Research Center at the University of Southampton. Stingray says it has delivered signals as far as 500 km (311 mi). This FosarDeep system is due on the market shortly.