Brazil's first exclusive presalt licensing round will be held in late October, with one production-sharing contract (PSC) on offer for the deepwater Libra prospect. 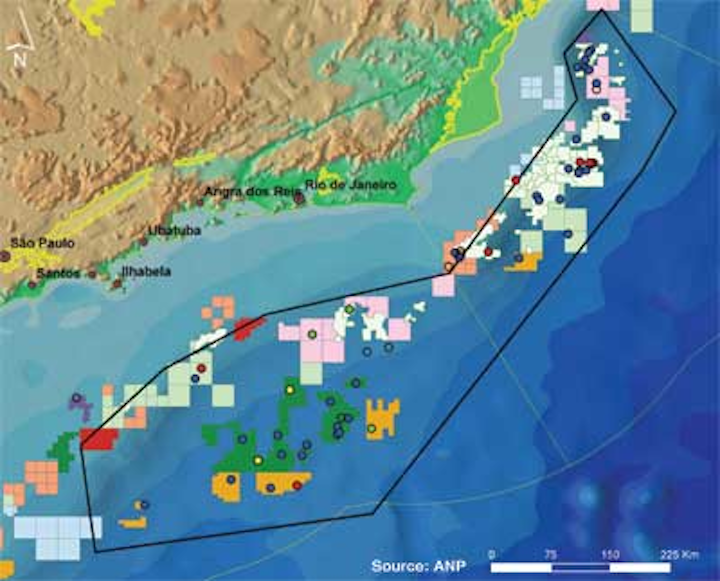 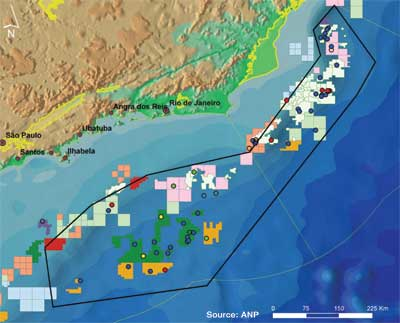 Brazil's first exclusive presalt licensing round will be held in late October, with one production-sharing contract (PSC) on offer for the deepwater Libra prospect. Brazil's National Petroleum Agency (ANP) estimates that Libra could hold between 8 and 12 Bbbl of recoverable reserves, which, if confirmed, would make it the country's largest discovery. The upcoming presalt licensing round will be the first opportunity for companies to bid for new presalt acreage since the announcement of the Lula field in 2007, and it will be the first time that the new PSC model, created under a new regulatory framework for the presalt, is put to the test.

The Libra prospect is located in the Santos basin in water depths of approximately 2,000 m (6,560 ft), near the large Lula, Sapinhoa, Franco, and Iara discoveries. Libra was once part of the BS-4 concession block. In 2001, the operator drilled a well targeting the post-salt section, which resulted in a dry well, and the concession was relinquished.

ANP confirmed Libra's presalt potential nine years later, when presalt discoveries elsewhere in the Santos basin prompted the regulator to drill a stratigraphic well. While the first well encountered mechanical problems, a subsequent well was successfully drilled to a depth of more than 6,000 m (19,685 ft) and encountered good-quality medium oil (about 27º API gravity). Subsequent seismic data interpretations by the ANP led to an estimated recoverable volume of 8-12 Bbbl of oil for Libra.

International oil companies and national oil companies will evaluate the risks and potential rewards of a Libra bid. The potential for value creation is huge, and to some extent the exploration risks are fewer than they are at comparable prospects. Costs are expected to be high, however, and the cost recovery caps are fairly low compared with other PSCs. The mandatory Petrobras operatorship may lessen the attractiveness of a bid to potential partners with a greater appetite for operational control or to partners who fear that Petrobras may already have too much on its plate.

Importantly, the structure of the Libra bid round will be different from the previous ANP rounds. In previous rounds, the signature bonus, local content, and minimum exploratory program were weighted criteria to determine the winning bids. In the upcoming Libra round, those factors will be fixed and not part of the bid, with the sole bidding factor being the percentage of excess or profit oil offered to the government.

The key terms of the new PSC model include:

The Libra prospect is potentially huge, both for the Brazilian oil and gas industry and the global industry. Libra could hold reserves equal to almost two-thirds of Brazil's current proved oil reserves, and production could reach as high as 1 MMb/d. The proposed model for the Libra bid round is unique: it features the simplicity of a single number (the government's profit oil percentage) that essentially reflects the prospects, complexities, and challenges of one of the world's largest undeveloped oil and gas resources.