Deepwater oil exploration offshore West Africa has flourished since the first oil and gas exploration of the Congo basin in 1994. 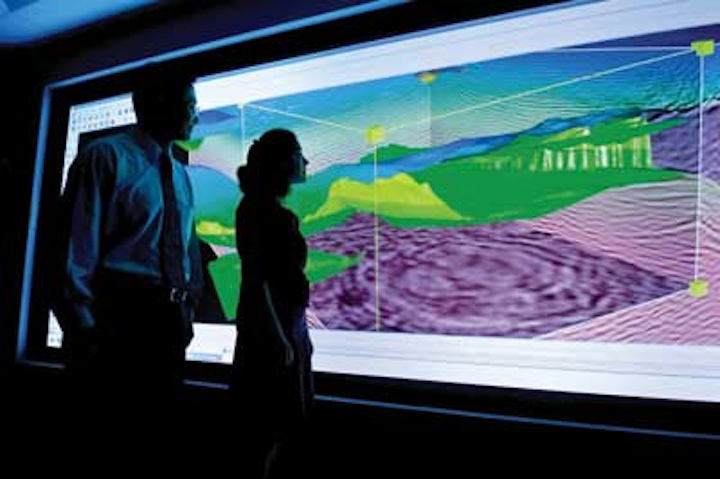 In the future, enhanced seismic images will improve drilling decisions

West Africa's appeal is hardly surprising. Its Atlantic margin consists of significant unexplored acreage offering considerable E&P potential. Little wonder then that these as yet untapped reserves have spurred considerable investments by local and foreign investors alike. According to a report published by Barclays earlier this year, E&P spending in Africa is set to rise by 4.5% year-on-year in 2013 to reach around $25 billion, with western Africa attracting the lion's share of this spending. Overall, global exploration and production spending is poised to reach a record $644 billion by the end of 2013, Barclays forecasts.

Within West Africa, Nigeria has a long-standing position as a major producer of oil, and is home to the second largest amount of oil reserves in the region. In addition to Nigeria, Angola has emerged as one of the most significant countries in Africa for the exploration of oil and gas and is home to over one-third of all discoveries made over the last three years in the region. For example, of the 52 oil and gas discoveries made in offshore West Africa between 2009 and September 2012, Angola accounted for more than one third of these discoveries.

Although Nigeria and Angola have led the way, other countries are presenting new and exciting opportunities. For example, Ghana has seen a wave of discoveries in recent years. Of the 52 oil and gas discoveries made offshore West Africa between 2009 and September 2012, 13 were made in Ghana.

In recent years, presalt plays have emerged as one of the most promising frontiers of oil and gas E&P. Geological evidence shows that when the geology of West Africa is compared with that of Brazil, there is an almost perfect symmetry between elements such as source rocks, reservoirs, seals and traps, and oil types. Approximately 120 million years ago, Africa and South America were both part of a super continent known as Gondwana. This giant land mass was split by the Atlantic Ocean, leaving a very similar coastal sediment on both sides of the ocean. This discovery led geologists to concur that the oil deposits found in the Brazilian presalt layer could be duplicated on the other side of the ocean in West Africa. It has been proven geologically that Angolan and Brazilian continental shelves share the most similarities, given that they were joined for a defined geological period.

The knowledge gained about Brazilian geology has led international oil companies to apply their understanding of oil fields offshore Brazil to the counterparts offshore West Africa. These companies are employing state-of-the-art seismic imaging technology to locate oil at water depths of more than 2,000 m (6,560 ft).

But the use of traditional seismic imaging in analyzing the geological systems in Angolan waters has often proved difficult, partly attributable to the existence of thick salt domes. These mushroom shaped structures are ideal for trapping oil deposits but extremely difficult to "see" beneath. These structures make seismic imaging precision difficult. To overcome the problems caused by the salt domes, companies employ complex algorithms to ensure that they are drilling in the right location.

Consequently, oil and gas companies have adapted their seismic imaging methods and techniques to more accurately predict where to drill. One of these advanced techniques is known as reverse time migration (RTM), a powerful algorithm used to image complex geological structures such as those in West Africa, particularly in Angola. The drawback to RTM is that it needs a huge amount of computer power — up to 30 times the computer power typically used in exploration techniques.

Repsol is one of the companies which invested in a new seismic imaging computer infrastructure in order to gain insight into RTM. The company has joined with some of the world's most sophisticated technological partners including IBM, the Barcelona Supercomputer Center (BSC), 3DGeo, and Stanford University's Stanford Exploration Project (SEP). Repsol launched Project Kaleidoscope in 2006, which uses new models and algorithms along with one of the world's most powerful supercomputers—the MareNostrum operated by the Barcelona BSC. The supercomputer enables algorithms to run as much as six times faster than on many seismic analysis platforms. (For more details about Kaleidoscope, see the June 2009 issue ofOffshore.)

In the long term, employing new processing strategies as well as taking deeper looks into seismic data, will make E&P companies more robust and competitive. This approach will also allow them to make better informed strategic decisions for their companies in a more time sensitive manner.

Those companies now in the forefront of oil and gas E&P have superseded the accuracy-versus-speed trade-offs that traditionally define seismic exploration. In years to come, improved access to improved seismic images and techniques will enable companies to make better and more accurate drilling decisions. Additionally, an enhanced view of possible petroleum deposits will give these companies an advantage when it comes to tendering and bidding for offshore deepwater oilfields. All of these factors combined means that the future of oil and gas exploration across West Africa looks to be extremely promising in terms of discovery and development.

The Kaleidoscope Project dates to 2009 and at that time targeted the use of new generation seismic imaging algorithms on high-performance computers to get the best decisions from the big data volumes generated by modern subsalt surveys.

The name "Kaleidoscope" does a lot to describe the project. It means looking at images, seismic images in particular, from the perspective of a kaleidoscope. This perspective uses the same data but with seismic imaging algorithms tailored to high-performance computing hardware.

Also, it was a technological response to a competitive business environment. With the volume of seismic data multiplying, Repsol said Kaleidoscope would provide a competitive advantage in the competition for oil and gas reserves.

To make the hardware economic, it needed to be based on commodity priced, off-the-shelf technology. The problem at the time was that PC clusters were reaching the ceiling because of the power wall of the processors.

Mass market computers do not target high-performance in the sense that the seismic interpretation industry uses. This hardware technology is based on 1980s processors, and could not go beyond roughly 40 gigaflops in frequency flow.

To run the new algorithms required new hardware. To be economic, that technology had to be based in commodity, off-the-shelf markets. That was one big Kaleidoscope Project aim.

The Kaleidoscope Project was created by Repsol to promote innovation. It inluded a seismic company, 3DGeo; scientific research institution, Spanish Scientific Council for Research; and the Barcelona Supercomputing Center.

The Kleidoscope Project involved simultaneous innovation of hardware and software to achieve a peta-scale solution to seismic imaging.

The chip that met all these requirements was the cell processor developed by Sony, IBM, and Toshiba aimed at the consumer electronics market for gaming stations. This processor is multi-core in the sense that it has different multi-cell units that work independently.

The chip has a main power processor element and eight sub-units called synergistic-processing elements, which are like accelerators for the main processor. These accelerators are based on technology used in graphic-processor units. The cell processor has 256 gigaflops performance with bandwidth of 75 gigabytes per second of input/output.

The numerical difficulty, for instance, of 2D Kirchhoff PSTM compared to the image intensity in 3D RTM is two orders of magnitude.