3D broadband is the wave of the future

Geoscience continues to strive for better and more accurate images of the Earth. 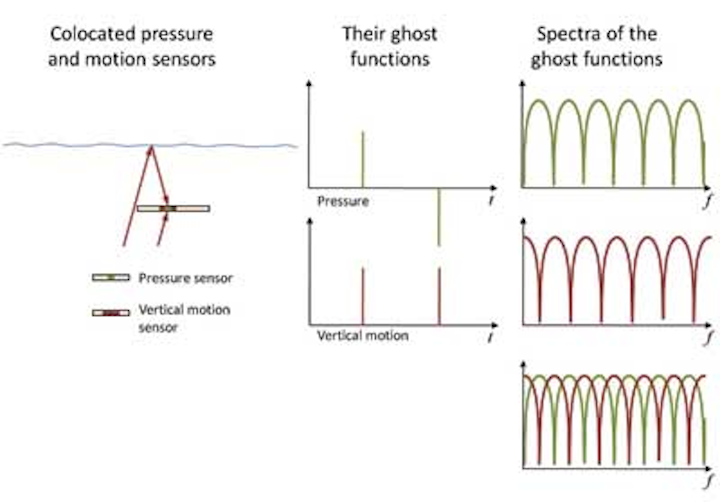 Geoscience continues to strive for better and more accurate images of the Earth. The goal is unchanged - drill fewer wells and find more oil and gas. While 3D seismic is key, the science must be robust and reliable. Marine seismic data is undergoing a broadband revolution, extending the recorded scale with both lower and higher frequencies. By separating upgoing and downgoing wavefields the ghost can be eliminated, or it can be used. 3D seismic data will play a greater role in reservoir characterization.

Deghosting or wavefield separation for a dual-sensor streamer is based on first principle science without restricting assumptions. The result is seismic data with a broader bandwidth both at the high end and the low end of the frequency spectrum.

The technology is more operationally efficient, provides better seismic imaging, and offers advantages in reservoir characterization. Reservoir delineation and geobody detection are improved thanks to an increased signal-to-noise ratio and broader bandwidth. The extended bandwidth, especially at the low frequency side of the spectrum, represents a key improvement in the lithology-fluid prediction and reservoir property estimation. The need for a priori assumptions is reduced by relying more on the data, which should notably improve the number of successful wells.

The ghost in marine seismic recording is the result of an almost perfect reflection of the acoustic wavefield from the sea surface. Up-going waves reflect as down-going waves with a reversed polarity, and interfere constructively for certain frequencies and destructively for other frequencies. This phenomenon can occur both on the source side and on the receiver side. The affected frequencies depend solely on source and receiver depths. Conventional marine seismic acquisition, therefore, involves a trade-off between the various frequency ranges. To record high frequencies, sources and receivers need a shallow tow, which strongly attenuates low frequencies. Conversely, a deep tow favors low frequencies at the expense of high frequencies.

A useful concept in discussing broadband systems is the principle of complementarity. Such an acquisition system has two or more components that complement each other when looked at in combination either in the time or frequency domain. A receiver system with both a pressure sensor and a velocity sensor represents such a complementary system. There are different time domain ghost functions between the two measurements, and this gives completely complementary amplitude spectra. The pressure sensor spectrum peaks align with the notches in the spectrum of the velocity sensor and vice versa. Adding the ghost functions together gives a completely flat spectrum, which leaves a single spike in the time domain - the ideal system response.

The simplicity of the complementary receiver system offers several advantages. Only the depths of the receivers need to be known to perform the wavefield separation, allowing this process to be performed on board. Up and downgoing wavefields can be delivered straight from the vessel during the acquisition phase to speed delivery of processed products.

The data quality uplift resulting from wavefield separation, and hence removal of the receiver ghost, has far reaching consequences. The receivers can be towed deeper. It is no longer restricted by the notches in the recorded spectrum which move into the central seismic band for deeper tows. The operational advantage is difficult to overestimate. Efficiency gains of 10-20% are recorded frequently, especially in harsh weather with a limited season. GeoStreamer has introduced a new acquisition paradigm. It has been demonstrated, for example, that it is possible to have year-round operations in places like the North Sea. Short arctic seasons can be filled efficiently and work programs and commitments completed in one season.

The upgoing wave being free of the receiver ghost, no longer has a bandwidth limited by the hydrophone notch frequencies. In fact, the bandwidth is limited only by the source ghost. When towed deeper, it has a richer content of low frequencies to improve penetration. The recording environment is also quieter, as the sensors are not subject to swell noise. Thus, the low frequencies doubly benefit from increased signal amplitude and decreased noise level.

The second dual sensor example is a 3D dataset from the North Sea. Prospects and fields that vary greatly in age and depth of burial were imaged with a superior data quality at all levels. Targets in this case study vary from very shallow Neogene channel systems through producing Paleocene sands to the Jurassic level, with the main focus on the Tertiary section.

Because of the improvement in signal to noise, better velocities can be picked. Both components of the separated wavefield can be used in a more accurate implementation of multiple attenuation processes like SRME (surface-related multiples elimination). The dual-sensor benefits penetrate the entire processing sequence from shot to image. Most exciting perhaps is the possibility of using both components of the wavefield in novel imaging schemes.

The fact that the wavefield can be separated makes it possible to calculate the equivalent of a pressure recording at an arbitrary reference depth. This yields a byproduct that is fully backward compatible with conventional data in 4D applications. The broadband data is a product in its own right but also represents a new enhanced baseline going forward.

Reservoir characterization and estimation of elastic properties greatly benefit from improved bandwidth. Extending the low frequencies by more than an octave stabilizes processes like inversion. Elastic properties can be estimated without well information and extended away from well control points with greater accuracy and confidence than can be achieved by conventional data. These aspects can be further understood through the effect and improvement of the seismic wavelet. The reduction of side lobes or tuning effects due to the presence of frequencies down toward 2 Hz makes AVO (amplitude versus offset) and related inversions more reliable and accurate.

Estimated absolute elastic properties, based on prestack inversion, have been compared to the well information over a particular line indicate a good match. More importantly, the scattering of points from the inversion results follows the elastic behavior predicted from well information, which is not the case with the conventional seismic dataset.

As case studies have demonstrated, the broader bandwidth, especially at the low frequency side, represents a key element in improving the seismic reservoir property estimation. This is particularly the case in the lithology-fluid prediction. The need for a priori knowledge based on well information is considerably reduced. The inversion and litho-fluid prediction using broadband data depend less on sparse well data. Therefore, accuracy of prediction of reservoir properties away from the wells will improve. The process becomes less model driven and instead more data driven.

Traditionally, multiples are removed from seismic data using processes like SRME. Since dual sensor recording enables separation of the wavefield into an upgoing and downgoing component, there is, effectively, a secondary source at every receiver point. Therefore, multiples may be used in imaging by employing downgoing wavefield. This will have far reaching consequences for image quality, and also opens a new chapter in terms of how geoscientists look at illumination of the Earth. It could alter the thinking about acquisition as well. Both coverage and aperture could be redefined. The combination of GeoStreamer wavefield separation and new imaging condition used in depth migration is producing promising results.

Removal of the source ghost has the potential to take data quality to yet another level in terms of bandwidth. GeoSource is a time and space distributed source based on conventional tuned subarrays. The source ghost can be removed due to the vertical separation of the subsources. Simultaneous firing ensures there is no loss in fold and a randomization scheme enables the separation of the subsource signals. Typical towing depth varies between 5 to 15 m (16 to 49 ft). The principle of complementarity is once again applied such that the subsources match each other in the frequency domain similar to dual sensors on the receiver side. Again, this is an acquisition-based approach without restricting assumptions and thus preserves amplitude integrity all the way from field data.