Repsol Sinopec Brasil has contracted Fugro to supply geophysical, geotechnical, and metocean services in support of the development offshore Brazil in block BM-C-33. 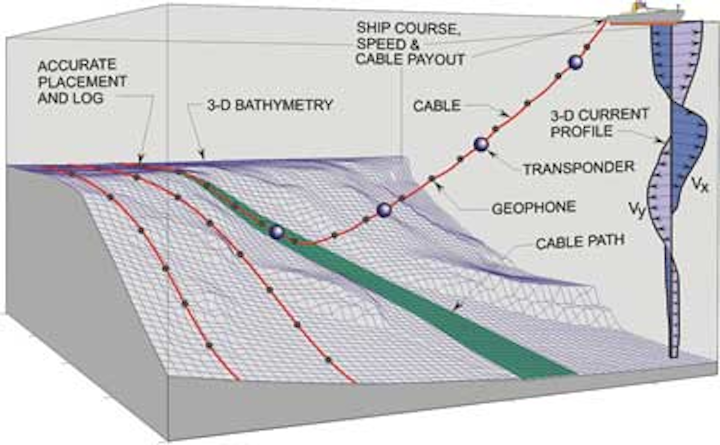 The geotechnical work includes jumbo piston coring and cone penetration testing together with data processing. The metocean data will be acquired over a 12-month time span.

The contract value is approximately BRL 40 million ($18.5 million) and work is expected to commence in 3Q 2013.

SAIC has two MakaiLay Seismic licenses and one MakaiPlan Pro Seismic license to use with its existing cable lay equipment for deployment of ocean bottom cables.

MakaiLay Seismic is designed to help accurately install and retrieve seismic OBC arrays. Makai says it can run on a laptop computer. It takes in data from an acoustic Doppler current profiler and transponders on the cable(s) and produces a vessel navigation and cable payout plan.

Both surveys will be acquired in partnership with PGS and use the PGS GeoStreamer technology. Data acquisition was scheduled to start this past August, and initial data is to be available to clients in 2Q 2014.

All three surveys are supported by industry funding, said TGS.

CGG has completed its second BroadSeis multi-client seismic survey offshore Norway in the Barents Sea. Fasttrack results from the 2,300-sq km (888-sq mi) survey are scheduled to be available by year-end, with final processing results by August 2014. The survey, in the southeastern part of the Barents, is adjacent to the recent extension of Norwegian territorial limits following an agreement between Norway and Russia. CGG's first BroadSeis survey in the area targeted the Halten Terrace. CGG said the area covered should be a strong candidate for inclusion in the scheduled 23rd licensing round set for the second half of next year.

CGG also has completed its first BroadSeis-BroadSource survey in Australia. The Sandman survey was done on the Northwest Australian shelf for Shell Development Australia.

The survey data set is currently being processed in CGG's Singapore Subsurface Imaging Center and is expected to be completed in 2Q 2014.

The new equipment will offer a significant improvement in resolution over the current instrumentation, said ARKeX, and will give the company an opportunity to develop new products and services. This will not only allow new resources to be discovered but also reduce exploration timelines and costs, concluded ARKeX.