The 2013 annual meeting of the Society of Exploration Geophysicists brought with it more than the usual number of technology announcements. 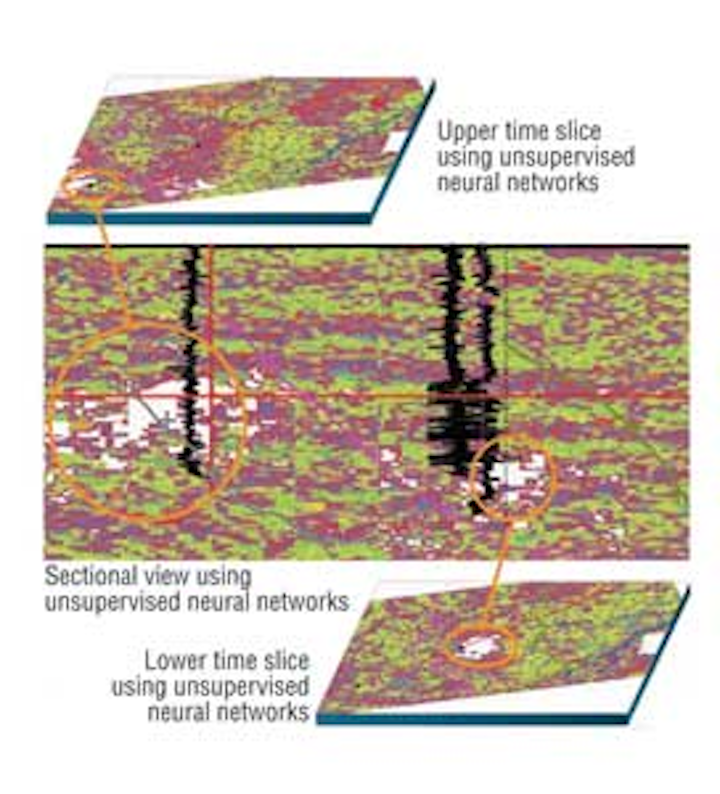 The 2013 annual meeting of the Society of Exploration Geophysicists brought with it more than the usual number of technology announcements.

The broad effort to make information out of data that follows the explosion of data acquisition volumes is compounded by on-going efforts to combine as much subsurface data as possible to improve both discovery and recovery. This includes steps to integrate well logs, drilling information, etc. with geophysical data such as seismic analysis to help better represent the true circumstances found downhole. It also puts added burden on processing speed and storage to accommodate the trend toward keeping a single database so that everyone is using the same information, regardless of purpose. In response, there is a burgeoning trend toward returning to a more centralized storage and processing system and away from desk computing.

Now to some of the specific advances.

GeoDataSync brings order to the workflow, said ARK CLS, allowing interpreters to use multiple interpretation systems within the same unified workflow. Data can also be accessed without the need to copy it, reducing storage costs for the large seismic 3D data volumes.

The initial implementation of GeoDataSync is as a plug-in to Schlumberger's Petrel seismic to simulation software. Through a separate plug-in, GeoDataSync allows users access to 3D seismic data volumes and other data stored within dGB Earth Sciences' seismic interpretation system, OpendTect.

"Running quietly in the background and lightweight, fast and efficient, GeoDataSync unifies the seismic interpretation workflow and enables interpreters to focus on their number one priority – accurately characterizing the subsurface," said Adrian Bennetton, managing director of ARK CLS.

"Paradise has been rigorously applied by our geoscientists in a wide variety of onshore and offshore geologic settings worldwide, including unconventional resource plays," said Dr. Tom Smith, president and CEO of Geophysical Insights. "We have excellent test results that give us confidence that Paradise will accelerate the creation of geoscience knowledge while substantially reducing exploration risk. Applying Self-Organizing Maps running as background tasks, it is the only geosciences software that can operate on seismic-related files automatically as new data files are added to the system."

Paradigm has unveiled Epic open and integrated platform in the Paradigm 2014 release at the SEG Annual Meeting & Exposition. In addition to Epic, the release has new workflows for full-azimuth imaging, tomography, formation evaluation, facies analysis, and modeling.

Epic will be released in stages, said Paradigm, with the infrastructure that unifies the suite into a single, integrated console scheduled for release this year. Connections with Petrel, JavaSeis, and ArcGIS will be available later this year and early in 2014 to go with existing connections to OpenWorks, GeoFrame, and OpenSpirit.

"This is the first time that users will be able to select specific applications from Paradigm to connect into their existing primary platform," said Duane Dopkin, executive vice president of technology at Paradigm.

Roxar Software Solutions division of Emerson Process Management has another approach to workflow and data integration for complex subsurface models.

"We made a segue from QC into interpretation," said Garrett Leahy, technical product manager, Roxar. "We designed a new tool that leverages structural modeling to give a model-driven interpretation."

It uses uncertainty in combination with the interpretation and modeling phases, he said, plus, the result is a fully 3D geologically consistent model.

"By capturing uncertainty and building models directly from the data, we generate a more complete representation of the data, and do it faster," said Leahy.

Including the uncertainty can keep poor data quality from delaying the process. That uncertainty stays with the interpretation during the entire modeling workflow.

One area of geophysics with increased emphasis and development is microseismics.

Baker Hughes and CGG have signed a letter of intent to realign the VSFusion joint venture to focus on microseismic monitoring, processing, visualization and interpretation, plus permanent monitoring. The venture, announced at the SEG annual meeting, is now called Magnitude.

Fernando Lopez, president of the Magnitude JV, said the value of the new arrangement is in an optimized network for better understanding of the reservoir resulting in improved production rates and efficiency.

Magnitude will use reservoir models that integrate log-derived, near-wellbore geomechanical and petrophysical properties from Baker Hughes with calibrated seismic data from CGG to help in well placement and completion design.

"PSET 5 is the next step in the evolution of PSET," said Dr. Peter Duncan, founder, president, and CEO of MicroSeismic. "It uses scaled estimates of the real size of the real fractures and where the proppant goes. It addresses the question of ‘How many wells does it take?'" to maximize production without over-drilling of wells.

"PSET 5 will tell you how effective your frac is, and the high-definition microseismic indicates the extent of the fractures, proppant placement, treatment efficiency, and presence of geo-hazards," said Mike Mueller, vice president, technology development.

The combination of these techniques can be used to estimate 90-day cumulative production, says MicroSeismic.

TGS is using its Clari-Fi technique to recover broadband data in both shallow and deep sections by addressing both the ghosting and earth filtering, said Zhiming Li, senior vice president of data processing and R&D.

The attenuation solution uses a constant Q correction for a balance between the recovery of high frequencies and the minimization of noise.

TGS also featured its work on 4D seismic in Statoil's Gullfaks field. In this one field, Statoil estimates the 4D program has added a value of $1 billion. More proof of value for 4D seismic technology is expected when the results of additional installations planned in the North Sea, Caspian Sea, and offshore Brazil are available.

The eBird now has a compass plus a GNSS receiver in the wings which can improve efficiency not only during launch and recovery, but also while running lines, says Kongsberg Seatex.

The built-in compass is fully integrated with SmartWing and provides heading information while submerged.

"We always try to find improvements to our solutions and these new features are excellent examples of how we combine our core technology and expertise to create improved value for our customers," said Gard Ueland, president of Kongsberg Seatex AS.

According to the agreement, PGS will control 33.4% and Toisa will have 55.4% of the operation.

Geophysical Insights is developing and applying new technologies to reduce exploration risks and the time required for interpretation. Some of those technologies include unsupervised neural networks (UNN) and principal component analysis (PCA). These are non-linear methods to seismic interpretation.

Unlike "supervised" neural networks, unsupervised neural networks do not require well logs for calibration but operate on multiple seismic attributes simultaneously. UNN reduces the dimensionality of the interpretation problem by enabling an interpreter to visualize the combined effect of multiple attributes in a 2D map.

The SEG Advanced Modeling (SEAM) Phase I research project on "Deepwater Subsalt Imaging" was completed shortly before the SEG 2013 event. This joint-industry project started in 2007, and involved 24 participating companies and a budget of $5.2 million.

While it may have a broader application than only seismic acquisition, ION introduced its Narwhal ice management system designed to extend the operations season in the Arctic and other ice-affected areas.

Narwhal can gather, monitor, and analyze data from multiple sources to track and forecast ice threats. Combined data can come from satellites, ice charts, radar, metocean data, and on-board observation. This all goes into making informed go/no-go decisions, to plan passages, and to identify escape routes during single or multi-vessel seismic runs and also during drilling operations.

"Narwhal extends ION's Orca and Gator II nav systems," said Chris Usher, ION executive vice president and COO of GeoScience. "It automates the tasks and uses whatever information is available in the right place for informed decisions. It monitors ice and alerts of intrusion into an alarm zone."