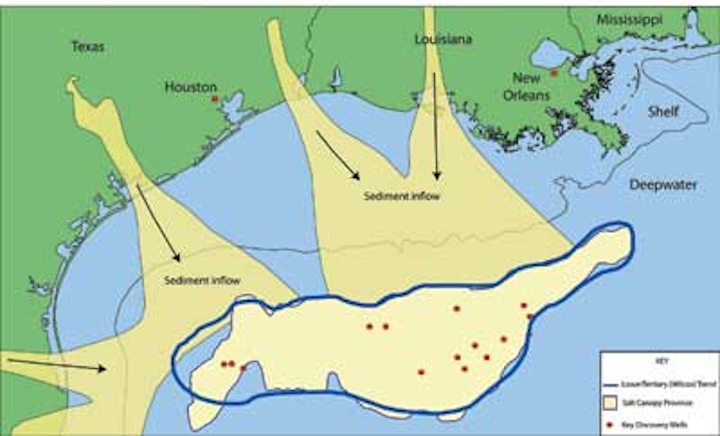 Regardless of location, successful seismic imaging and interpretation of the Lower Tertiary are challenging.

Major deepwater GoM discoveries such as Tiber, Jack, Kaskida, Tiger, and Trident spread across Alaminos Canyon, Walker Ridge, and Keathley Canyon areas, prove that this prolific Lower Tertiary (primarily Paleogene) trend can be extrapolated into the deeper waters of the Gulf. Until these discoveries, 99% of GoM proved reserves were in sediments of Miocene age (Upper Tertiary) and younger.

One key challenge in the Gulf of Mexico is to image exploration targets through the extensive Louann allochthonous salt layer. The original autochthonous Louann salt is Mid Jurassic in age, and thicknesses can range from 2,000 ft (610 m) to 12,000 ft (3,658 m). Regional tectonic activity as well as substantial sediment loading facilitated the emplacement of the shallow allochthonous salt. The shallower salt can range from smaller scattered salt sheets to vast salt sheets fed by salt diapirs and massive diapiric salt walls, all of which present imaging challenges.

The presence of evaporates in any seismic section has significant consequences on data processing and imaging. Depending on the geometry of the salt and the type of sediments surrounding it, there can be substantial seismic velocity contrasts at the salt boundaries. This gives rise to complex ray paths with implications for the seismic imaging. In particular, where the salt is diapiric or there are isolated salt bodies within clastic sediments, such as in the northern Gulf of Mexico, very large lateral velocity contrasts occur at the flanks of the salt. They are handled poorly by pre-stack time migration. In such circumstances, pre-stack depth migration using velocity models which explicitly incorporate the salt can solve this imaging problem. This can be effective when applied to 2D data, although best results require 3D imaging.

Much of the Faroe/Shetland basin on the northwest part of the UKCS and part of the northeast Atlantic continental margin rift basins. Although there are major Lower Tertiary hydrocarbon discoveries, much of the basin is still regarded as "frontier" (especially the western Faroe territory). Seismic imagings of prospective reservoir targets in the region have been problematic due to extensive Tertiary basalt. The basin lies in water depths ranging from approximately 200 m (656 ft) to more than 1,000 m (3,281 ft) and is divided into both UK and Faroe offshore territories, with the Faroe area covered in a thick layer of basalt. The shallower water UK territory has little or no basalt cover and subsequently is the location of all the Lower Tertiary discoveries so far. The key exploration challenge is to improve imaging below the basalt to extrapolate the successful hydrocarbon plays into the poor seismic imaging areas.

The Faroe/Shetland basin has a long and complex geological history, with a number of rifting and compressional periods. This provides an environment for a number of potential play types. The basin can be regarded as a large regional graben containing a number of northeast-southwestern trending sub-basins. Deep Mesozoic and Cenozoic sequences are recognized in the UK sector (although only inferred in the Faroes) as containing both mature hydrocarbon (both oil and gas) source rocks and potential reservoir rocks. A number of proven hydrocarbon plays exist in the basin, ranging from deeper fractured basement reservoirs to shallower high quality Eocene fan reservoir sands.

The initial stages of continental breakup during the Paleocene to early Eocene resulted in the outpouring of massive amounts of plateau basalt lava in the Faroe area which thinned easterly. These basalts present a huge seismic imaging challenge.

The most commercially important reservoirs in the basin are extensive Paleocene to Eocene turbidite fan sandstones. Sandstones are typically well sorted and very clean, with reported porosities of 20-30% and permeabilities ranging from 500-2,000 mD. In the eastern UK sector, these sandstones are relativity well understood and are thought to be present throughout the whole of the basin, especially below the basalts. Lower Tertiary plays can be both structural and stratigraphic; currently, stratigraphic plays provide the main success. Trapping geometries can include up-dip pinch outs, depositional pinch outs, as well as faulted anticlinal traps. There are numerous Palaeocene discoveries in the west of Shetland basin, the most significant in recent years are the Foinhaven, Schiehallion, and Rosebank multi-billion boe oil and gas fields.

The locations of the successful exploration wells to date are restricted to a few sub-basins in the eastern portion of the main basin. Exploration success elsewhere in the Faroe/Shetland basin is limited. The successful seismic imaging of the subtle hydrocarbon trap style is a major factor. The key failure for more than 40% of all the exploration wells has been trapping geometry. Many wells drilled on favorable AVO anomalies still were unsuccessful, with high amplitude events related to changes in lithology and not hydrocarbons. A lack of a reasonably robust tie to a source origin and lack of robust structural closure are proposed reason for failure.

Thick basalt sequences in the west of Shetland basin, by their very nature are heterogeneous and have a high seismic velocity. A large velocity contrast between the top basalt and the overlying sediment causes the majority of the incident seismic energy to reflect upward. The transmitted component of the energy travels though the highly absorbing and scattering basalt sequence. Consequently, the sub-basalt section is very weakly illuminated, making imaging very difficult. Furthermore, the sub-basalt section will be heavily contaminated by scattered noise and strong, complex multiple events which overwhelm the weak primary events.

Finally, energy is refracted at the top basalt and this energy can contaminate the far offsets at times which are coincident with the sub-basalt reflection data, making velocity analysis problematic.

As a result, key issues which must be addressed in processing are noise and multiple attenuation, and the derivation of accurate velocities. Long-offset seismic data is beneficial, but even successful processing is likely to result in only low-resolution images of the sub-basalt.

This has significant consequences when trying to extrapolate successful west of Shetland exploration targets into the sub-basalt. As mentioned, in the west of Shetlands discoveries are predominantly in subtle, stratigraphic, or combination traps. While it may be hypothesised that analogues of these could be present below the basalt toward the Faroe Islands, they will be extremely difficult to image. Consequently, it can be deduced that any future sub-basalt exploration is likely to target large structural trapping geometries.

Many of the issues regarding imaging of exploration targets below salt and basalt sequences require focused 3D imaging to fully resolve many of the challenges. However, Spectrum has worldwide experience in both modern processing and reprocessing techniques on 2D seismic data for salt imaging, in particular the Spectrum Eastern Gulf of Mexico Big Wave Survey and Eastern Mediterranean where imaging below the extensive Miocene Messinian salt sequence has been dramatically improved. Spectrum has experience in sub-basalt processing, in particular offshore western India, where Spectrum's processing techniques imaged a significant Mesozoic sequence below the Deccan basalts for the first time. Spectrum is conducting integrated reprocessing trials on its west of Shetland 2D seismic database in combination with electromagnetic and controlled source electromagnetic survey techniques. It is hoped integration of these techniques, although not to define leads or prospects beneath the basalt, will nevertheless identify and constrain any possible sedimentary basin.