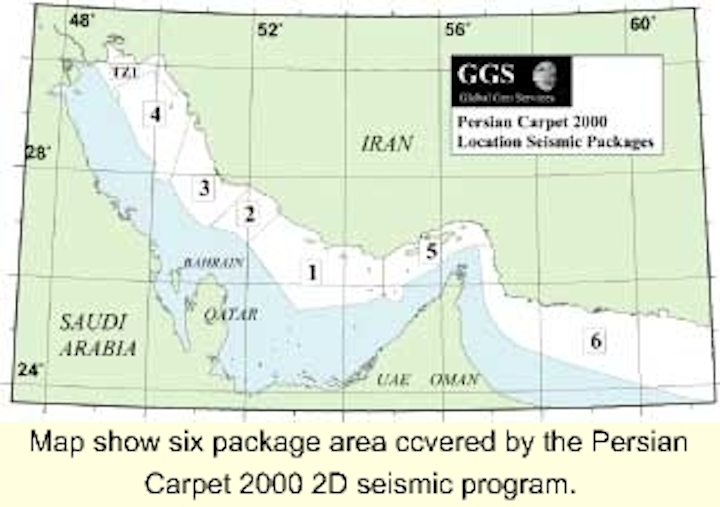 Exploration activity across the Persian Gulf could surge following a major new multi-vessel seismic survey in Iranian waters. When complete, the Persian Carpet 2000 program will be the world's largest 2D seismic acquisition effort, covering more than 110,000 km over the Iranian sectors of the Gulf and the Sea of Oman to the south.

Four seismic vessels and a Chinese transition zone team have so far acquired 80,000 line km, of which 50,000 line km have already been proc-essed. The deadline for completion of the survey program is August. The areas surveyed have been divided into six large package areas. By last month, seven European oil companies had signed licensing agreements for data sets averaging $15 million in value. If the US sanctions against Iran are lifted, this could push the total number of agreements signed to 20 by the end of this year. Interest is heightened by the fact that a large part of the survey area has never been drilled.

The prime mover for this project has been the Oslo-based Norex group, a specialist in multi-client geophysics and virtual reality software. In 1998, it paved the way by forming a joint venture with Iran's Mostzafan and Janbazan Foundation, a powerful conglomerate created in 1979 to manage the wide-ranging assets (including oil and gas) of the deposed Shah. In March 1999 the two parties signed a contract with the National Iranian Oil Company (NIOC) to undertake the Persian Gulf project.

Management was entrusted to Norex's new subsidiary company MEGA, later re-named Global Geo Services (GGS) in readiness for a listing on the Oslo Stock Exchange. In September 1999, Beijing geophysical contractor BGP International was brought onboard as a partner in the PC 2000 program. BGP's contribution so far has included the Bin Hai 517 acquisition vessel and a seismic team to handle transition zone operations.

Since data collection started in summer 1999, GGS has also deployed NIOC's research vessel MV Pejwak (ex-Geco Echo) on charter to acquire "deep marine" data (beyond 20 meters water depth) with the Bin Hai 517. Another vessel, the Geomariner 1 (owned by Seabird, but operated by GGS) has been employed in the shallower marine areas (3-30 meters). Recently, GGS also entered into a long-term lease of the seismic vessel Odin Explorer, partly to help complete the current program while the Pejwak and Bin Hai 517 undergo upgrades to 3D capability.

Robertson Research and Spectrum, both in the UK, are managing processing for the five Persian Gulf package areas. CGG will undertake that role for the Sea of Oman survey. By mid-February, however, arrangements had yet to be finalized for a 20 km transition zone corridor.

Beginning in the northernmost area under survey, Package 4 (Kharg) covers the Iranian shelf between the cities of Bushehr and Bandar E-Deylan. Producing horizons in this region are of Permian to Cretaceous age, with potential also in the Tertiary. Key play types to date have been structural traps, discovered reservoirs being fractured carbonates and sandstones. Here the Bin Hai 517 has collected 15,319 line km of data using a 4,800-meters Syntrak 480 streamer across a 2 km by 2 km grid.

To the south, Package 3(Bushehr) relates to the shelf between Bushehr and Dayyer. Prod-ucing horizons and key play types are the same as for Package 4. The 11,137 km, 2 km by 2 km grid has been assembled by the M/V Pejwak, using a 4,500-meter Nessie-3 (modified) streamer.

Package 2 (Central Gulf West) stretches from the city of Kanghan to the offshore South Pars Field, with the same producing horizons and play types as before. The Pejwak has completed collection here of the 6,299 line km, 2 km by 2 km grid. Processing of this package has also been concluded by Spectrum.

Between South Pars and the Salman Field is the Package 1 area (Central Gulf East). The 10,916 line km dataset has been compiled and processed. Next in the sequence is Package 5 (Qeshm), covering the area around Qeshm Island and the Hormuz Straits. Data collection here started this January and is divided as follows:

Lastly, the sixth package area, covering the Iranian side of the Oman Sea, has also been divided into three phases:

Bin Hai 517 is working on this program, using a 6,000-meter cable with a 3,480 cu in. source. The results will provide the first overview of the geology of the North Oman Sea, where waters range from normal shelf to deep water. According to GGS, the most notable geological features will likely be subduction, sedimentary accretional prisms and the paleo- Tethys oceanic sea floor. Potential licensees can participate at a basic rate of $220/line km.

GGS also plans an aero-magnetic survey across the entire contracted area, and in the longer term to follow up with 3D multi-client surveys over selected areas to capitalize on NIOC's promotion of new exploration terms. Subsequently, intends to extend its survey work into other geographical areas, acquiring up to 100,000 km of multi-client 2D seismic and 5,000-10,000 km of 3D multi-client seismic annually via a fleet of three to four seismic vessels. It will complement this by developing its own processing, interpretation, and virtual visualization capability.