Mexico's National Hydrocarbons Commission (CNH) recently opened its waters to allow international seismic companies to shoot and sell acquired data, a first in the nation for more than 75 years, ahead of prospective new bidding rounds. 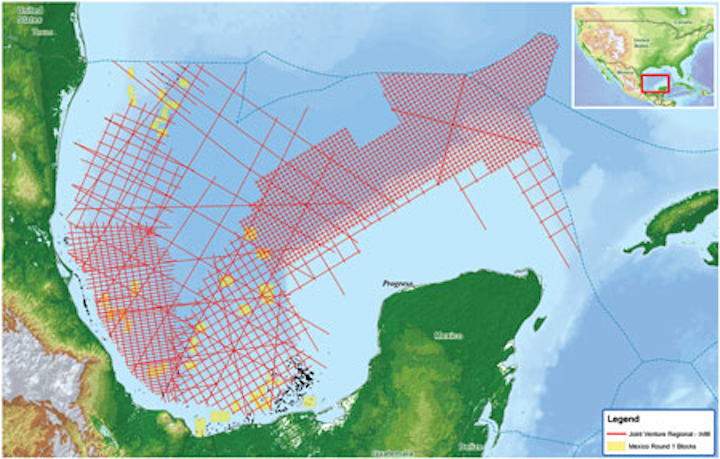 Mexico’s National Hydrocarbons Commission (CNH) recently opened its waters to allow international seismic companies to shoot and sell acquired data, a first in the nation for more than 75 years, ahead of prospective new bidding rounds. The event is the first in a series of petroleum auctions that opened the energy industry, which is expected to bring in an estimated $62.5 billion by 2018 and increasing annual output by 500,000 b/d.

The invitation to bid commenced in December 2014 followed by the opening of the tender process in 1Q 2015. In late March, CNH provided data room access to approved parties, which opened the door to decades worth of seismic data for operators to assess before Round 1 commenced.

“We disclosed all the seismic information that has been kept confidential for decades,” Juan Carlos Zepeda Molina, president of CNH, stated at a Houston conference in March. Zepeda added that access to all available seismic data was expected to be made public this summer.

Prior to seismic companies bidding in the tender process, CNH requested new seismic data due to changes in both processing and acquisition technologies. Because the technologies are changing so rapidly there is a considerable uplift in acquiring new seismic data. It is believed that longer offsets in acquisition will deliver better images with newer processing algorithms providing improved images of the subsurface.

Once CNH published the model production-sharing contract for the first phase of Mexico’s Round One bid process, relating to 14 form areas in shallow waters, interested parties were given access to perform hydrocarbon exploration and production operations in the contract area on an exclusive basis.

Mexican regulators then offered permits after the application of nine major companies were submitted for new seismic testing, allowing seismic companies to sell the information for a specified number of years to potential investors with the understanding that it will eventually be made public.

Spectrum Geo’s President Richie Miller toldOffshore there is no time limit on the agreements, with the government granting the companies 12 years of exclusive licensing rights for the project, with an extension option, too.

Petroleum Geo-Services (PGS), the first company to commence operations of a multi-client 2D seismic program in the Mexican Gulf of Mexico (GoM), launched its project on May 16. The 2D vesselsAtlantic Explorer and Sanco Spiritacquired multiple projects recently approved by the Mexican government. The first program is the Mexican Well Tie MC2D, which is expected to provide clients with an understanding of the hydrocarbon prospects in the area.

PGS said that fasttrack products were made available in June 2015.

“PGS is proud to conduct its first commercial seismic acquisition project in Mexico after approval of the Mexican Energy Reform,” said Gregg Parker, regional president NSA MultiClient in PGS. “We have worked diligently to position the company as a first mover in Mexico and we are now very pleased to say that we have been successful in our endeavor. PGS views Mexico as a viable investment market for many years to come for the full suite of all of our solutions.”

Additionally, in late June PGS announced an execution of an MOU for a cooperation agreement with Spectrum and Schlumberger in Mexico. The collaboration will acquire 49,710 to 62,137 mi (80,000 to 100,000 km) of modern, long-offset 2D data encompassing all the major hydrocarbon provinces offshore Mexico. This included areas currently on offer for Mexico’s Round 1 in the Perdido Fold Belt, Mexican Ridges Province, and Campeche Deep Sea basin, and also provided coverage across the Yucatan platform tying to Spectrum’s Big Wave program in the eastern areas of the US GoM. The previously announced PGS MultiClient Mexico Well Tie program will be included in this collaboration.

TheHawk Explorer acquired data in early July and TGS expects to ramp up to a total of four vessels this year to work on the Gigante project, covering a large portion of Mexico’s offshore sector. The data includes producing trends such as the Perdido fold belt and Campeche Bay. Gigante is slated to also include gravity and magnetic data with a regional seismic structural interpretation.

Acquisition of the data should continue for about 15 months while TGS processes it simultaneously to deliver “fasttrack” versions of the records to customers in October 2015, Hobbs said.

“This contract is certainly one of the bright spots for the seismic industry,” he added. “There is a need for new data with appropriate technology as companies consider how they want to invest in extremely prospective and under-explored basins.”

This survey “will provide the industry with unprecedented continuous coverage across the rift basin,” Hobbs added, “enhancing regional context and understanding of depositional systems and prospective regions. The grid ties known as petroleum systems, as well as vast under-explored areas of the basin, serve as a springboard for new exploration.”

MexicoSPAN supports both current and future offshore bidding rounds, and is designed to provide regional coverage of both the prolific production areas of the western Gulf, and the exploration frontier margins of the eastern Gulf and northern Yucatan. Subsequent infill phases will commence after completion of Phase one – these infills will sufficiently enhance the 2D profile (to better identify prospective structures) before moving deeper into 3D workflows using the large volume of 3D data soon to be available via the CNH.

Fasttrack products should be available in 3Q 2015, the company stated.

Another area that has garnered a lot of interest is the Campeche/Yucatan areas in Mexico’s southern offshore region in the Gulf. Recently, Spectrum partnered with Schlumberger to jointly acquire and process Spectrum’s offshore Mexico Campeche-Yucatan 2D regional multi-client program. The agreement includes more than 27,340 mi (44,000 km) of regional 2D seismic data in the frontier Campeche/Yucatan area. The survey covers areas from the Campeche Escarpment, including ties to the Round 1 block, the Yucatan shelf, and the deepwater.

The 2D regional program also provides a tie to Spectrum’s Big Wave multi-client program in the northern and eastern areas in the US section of the GoM. Work started in June with fasttrack products slated for the summer, and final products earmarked for November.

“We have two vessels working on the project with about four months earmarked for completion and processing,” Spectrum’s President Richie Miller toldOffshore. “We’re anticipating having the data for availability for the people shortly after that, with a few of the customers being bidders for Round 1.”

He added: “We’re expecting a lot of activity, especially since so many operators have registered to participate. Whether it’s as big of a market as the US GoM, only time will tell.” •