Frontier seismic surveys were due to start this fall offshore Somalia and in the eastern Black Sea. 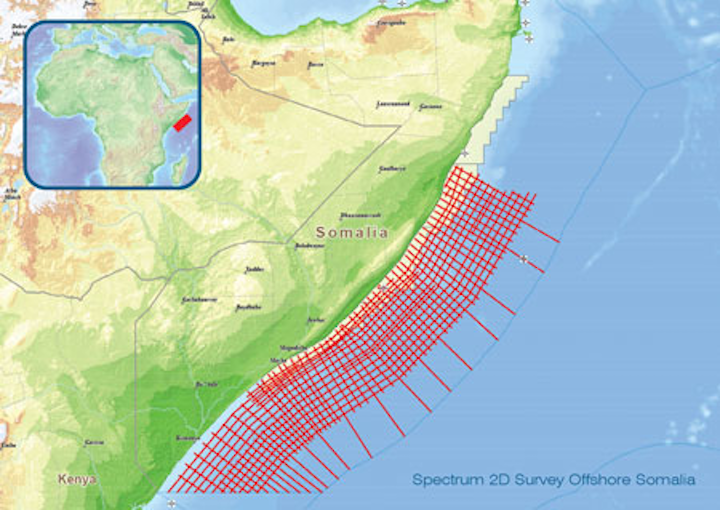 Frontier seismic surveys were due to start this fall offshore Somalia and in the eastern Black Sea. For different reasons, the industry has largely shunned both regions over the past two decades, but new developments are altering perceptions.

Spectrum Geo is directing both operations. The company has an agreement with the federal government in Somalia to acquire around 28,000 km (17,398 mi) of new 2D data in the Indian Ocean off the southern half of the country in water depths of 30 m -4,000 m (98-13,123 ft). This is designed to complement and infill a survey acquired last year closer to the shore off the same coastline. Part of the contract area includes an offshore concession assigned to Shell and Exxon in 1988.

The new data will provide the first in-depth view of the country’s offshore prospectivity, which is attracting new interest following the recent discoveries along the East African Margin, including BG’s Sunbird oil find offshore neighboring Kenya. Streamer lengths of 10,050 m (32,972 ft) will be used in the current campaign to record information at all offsets, assisting imaging of the underlying syn-rift geometries. Spectrum will then apply modern processing algorithms to optimize imaging of known steeply dipping extensional and compressional features and to highlight amplitude anomalies. On completion, the company will have sole marketing rights for the dataset, which will provide coverage over the shelf, slope and basin floor.

Somalia is known to have three main oil-producing basins: the Permo-Triassic, Jurassic, and Cretaceous. Various international oil companies explored intermittently onshore Somalia before withdrawing as security deteriorated. According to Abdulkadir Abikar Hussein, the geological survey head at the Ministry of Petroleum and Mineral Resources - speaking at a recent Spectrum seminar in London - much of the country is know to have sediments 3-5 km (1.86-3.1 mi) thick, but historically, the wells drilled were too far apart.

Following the installation of the federal government, stability has improved, leading to the renewed interest from the oil and gas sector. The Ministry itself was created in 2011 and has been working on a legal and regulatory framework to finalize terms for a competitive production-sharing agreement linked to a future bid round, which could be staged in 2018. Spectrum’s data will be available for this round, as will old legacy data, much of which CGG is managing and marketing on the Ministry’s behalf.

For security reasons the Ministry is ignoring onshore Somalia for the time being, Hussein said. “We need to first focus on the Indian Ocean, followed by a Gulf of Aden bid round in the north - if we can reach a settlement with the northern separatists.” Once the new framework and datasets are in place, he added, “we can show that Somalia means business, that the country has come back to the international community and that it is ready for really serious oil and gas exploration.”

Spectrum’s other frontier survey should be under way in the East Black Sea basin. Although the basin is similar in size to the Gulf of Mexico, only three exploration wells have been drilled to date, and there are large areas of open acreage with only sparse modern data coverage. However, the Maykop formation in the Black Sea area is a proven source rock that has also generated large oilfields to the east in the Caspian Sea.

In total, the current survey will acquire 14,000 km (8,700 mi) of long offset 2D data in a 10 x 10 grid over the southeastern part of the sea using 12,000-m (39,370-ft) long streamers, with broadband processing. Acquisition should finish during 1Q 2016, with the first processed pre-stack time migration (PSTM) data set to be released a few months later.

Recent spectacular drilling results in the Romanian sector suggest the west side of the Black Sea is largely gas-prone, especially in deepwater Palaeo-Danube plays, said Dr. Neil Hodgson, Spectrum Geo’s executive VP Multi-client, Mediterranean and Middle East. “However, we believe the east will be oil-prone. The region is the location for a past collision between two thrust zones, the Greater Caucasus North and the Lesser Caucasus systems.” This part of the Black Sea has very little existing multi-client seismic data to draw on for establishing hydrocarbon plays. Spectrum has therefore scanned and vectorized Russian academic data from the 1980s to build a basic overview, although not of the quality needed “to chase the play,” Hodgson said.

“This was a rift basin opened in the early Cretaceous, subsequently infilled by clastics thought to have stemmed from the Georgian delta system. That created a set of understandings of the basin that we aim to challenge with our new data set.” Typical perceptions are of poor-quality reservoir, based on overpressure encountered by the few wells drilled (two of which drilled through targeted Tertiary clastics).

The East Black Sea basin was once part of a giant inland sea system that extended to the Caspian Sea, Hodsgon continued. Satellite images have revealed oil seeps, some originating from Georgia, confirmed as thermogenic by subsequent sampling. “We also took our own satellite images and spotted more seeps on the margins of the basin just offshore Turkey and on the maritime border between Turkey and Georgia.” These seeps show that oil is sloshing and trying to find a reservoir to migrate to, he suggested. TPAO, the Turkish state oil company, has also mapped from its data sands coming from western Georgia’s Rioni River Delta in the east to the Pliocene in deepwater, he added.