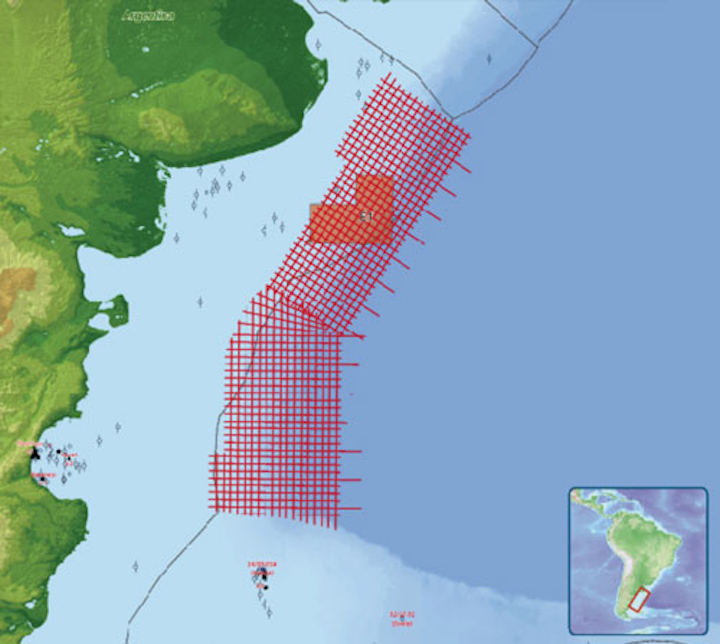 The Argentine basin covers an unexplored area of more than 450,000 sq km (173,746 sq mi) on the outer shelf, slope, and basin floor offshore Argentina. In order to support renewed exploration activity and growing interest in offshore exploration, Spectrum is currently acquiring a 35,000-km (21,748-mi) multi-client 2D survey offshore Argentina. The new acquisition program will provide high quality imaging necessary to understand both tectonic architecture and prospectivity in the Argentine basin, using a 12,000-m (39,370-ft) streamer and dense fold geometry. Final deliverables will include both broadband PSTM and PSDM, with the first tranche of data expected to be available in 4Q 2017.

As the first data was relayed via satellite to the company’s operations center in Houston, Spectrum’s President of NSA, Richie Miller, said: “The new data is amazing even in brute stack, allowing early participants to begin their analysis of this area in real time.” This is the first dense regional grid of modern, long-offset, broadband seismic data on this margin. This data will enable explorationists to search for oil in a number of plays, complemented by regional studies on conjugate margins of the southern Atlantic.

On the northern part of Argentina’s shelf, the Salado and Colorado basins form part of a series of pre-Atlantic (Karoo equivalent) rift grabens running east-west. These grabens were infilled during and following the formation of the Atlantic Rift, and acted as funnels for major Cretaceous and Tertiary sediment input into the Argentine basin. On existing legacy data, Cretaceous clastic deltaics are observed prograding over Triassic and Jurassic syn-rift basins at the shelf margin, then down slope over Early Cretaceous syn-rift geometries which grade into seaward dipping reflector rich transitional crust and oceanic crust in the east. The slope sediments of this passive margin acted as conduits transporting clastics to the basin floor, inevitably depositing extensive sands as basin floor fans (BFF). In common with other passive margins these have often been interpreted on two-way time sections, which indicate that the sandy channels provide an up-dip leak point to the BFF. It is unusual, though widely sought after for exploration purposes, for these channels to have depositional by-pass zones within them or between the channel and the BFF. In the absence of these by-pass zones, such plays have been downgraded due to the risk on up-dip seal. However when imaged in depth (either as depth converted data or PSDM), the BFF of the southern Atlantic are observed to be dipping up in a seaward direction, where they pinch out yielding lower risk stratigraphic traps of immense size.

Such plays at the Early Cretaceous level have been discovered on modern 2D PSDM seismic data acquired east of Uruguay’s Punta Del Este basin in the Oriental Del Plata basin, but are as-yet unexplored. The recent Raya well in Uruguay did not go deep enough to test these BFF systems, but there is considerable exploration potential along the Atlantic margin. Additionally, the evaluation of this margin indicates that a regionally-extensive rich oil source rock of post-rift Aptian age will be present in both the Oriental Del Plata and the adjacent Argentine basins.

Initial basin modelling of this margin indicates that Karoo-Jurassic syn-rift source rocks on the Argentine shelf margin, where geothermal gradients are high, are oil generative. Progressively lower geothermal gradients over lower slope, transition and oceanic crust allow both syn-rift and post-rift sources to be oil generative despite burial under significant sedimentary packages.

The Salado basin is a narrow symmetrical basin with up to 7 km (4 mi) of continental syn-rift, basal sag and marine sediment fill. This basin is a conjugate to the Orange basin in South Africa. Plate reconstructions suggest that prior to Atlantic rifting a series of Karoo rift basins, aligned in a northeast-southwest orientation, extended from the Somali Obbia basin, through the Selous basin of Tanzania, and southwest across Africa into the Orange basin and ultimately the Salado basin, where the pre-Jurassic sediments are Karoo equivalent. The Karoo Supergroup has a well-established prolific petroleum system with onshore fields located all along this trend and has the potential to be a viable play for the Salado basin. At the shelf margin a series of Jurassic and Early Cretaceous syn-rift half-grabens have potential for important hydrocarbon plays.

The Colorado basin to the south has similar characteristics to the Salado basin. Additionally, studies carried out by Paton et al. (2017) propose a revised plate reconstruction for the region, identifying for the first time the direct continuation of the Cape Fold Belt (CFB) offshore into the southern portion of the Orange basin. Using the correlation from onshore regional tectonics this reveals that the inboard portion of the Orange basin is likely to have the Table Mountain Formation sub-cropping the break-up unconformity, and the folding imaged in the reflection data reflects the deformation observed onshore. The restoration presented in the same publication suggests the continuation of the CFB toward the west is into the Argentinian Colorado basin. This provides potential for both granite and quartzite fractured basement plays proven by the GA-A-1 well drilled in the Pletmos sub-basin of South Africa which encountered gas in fractured and sub-aerial quartzite of the Table Mountain Group Formation.

Initial results from this year’s seismic acquisition in the Argentine basin are proving the continuation of the plays observed in Uruguay. In direct analogy to the Argentine basin, the Punta Del Este is located on the Uruguayan Atlantic shelf and comprises a northwest trend Jurassic aulacogenic rift which acted as a clastic feeder system to the Oriental del Plata basin formed by Atlantic Early Cretaceous rifting. A depth migrated northwest-southeast seismic section from Uruguay illustrates a series of Early Cretaceous basin floor fans with soft kicks and bright amplitude anomalies directly overlying oil-mature Aptian source rock in the Oriental del Plata basin. Very thick (up to 1 km) contourite drifts are observed, prograding over the basin floor sand-rich fans. Such drifts may be silt rich - representing the fine materials winnowed from sand-rich turbidites up-current. However, excellent examples of sandy contourites are known globally from outcrops. For example, the Cadiz Sand Sheet located proximal to the Straits of Gibraltar, is composed of a giant sand sheet with an estimated area of 4,000 sq km (1,544 sq mi), extending along the mid-slope for at least 100 km (62 mi).

There is significant E&P potential in unexplored areas offshore Argentina. Significant potential is proposed in the pre-rift and syn-rift sections as either the continuation of the Karoo Supergroup into the Salado basin or fractured basement prospectivity with the extension of the Cape Fold Belt into the Colorado basin. Jurassic and Early Cretaceous syn-rift half grabens at the platform margin could also contain viable hydrocarbon plays. More importantly, the Salado and Colorado basins have been major clastic sediment feeders into the Argentine basin, where newly acquired seismic indicates huge potential in basin floor fans and contourites deposited above mature Aptian source rock. It is likely that Argentina will hold an exploration licensing round in this basin in early 2018, paving the way for the offshore to become the hub for ground-breaking exploration activity.