Exploration wells operated by HRT during 2012 and 2013 offshore Namibia have significantly reduced the uncertainty on distribution of oil mature Aptian source risk in the Walvis basin Wingat-1 and Murombe-1. Both wells encountered thick Aptian source rock above the Breakup Unconformity. 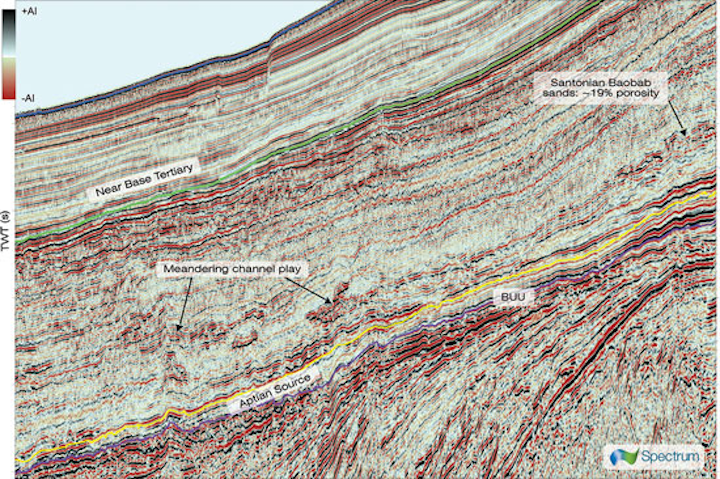 When explorers approach a new basin the first petroleum system aspect to evaluate for hydrocarbon potential is the presence and maturity of source rock. It is the key risk element that screens nine out of 10 duff basins, so it is the place to start.

Exploration wells operated by HRT during 2012 and 2013 offshore Namibia have significantly reduced the uncertainty on distribution of oil mature Aptian source risk in the Walvis basin Wingat-1 (2212/07-1) and Murombe-1 (2212/06-1). Both wells encountered thick Aptian source rock (about 200 m) above the Breakup Unconformity.

The Wingat well not only penetrated the Aptian source rock, but it also recovered light oil, 38o to 42o API, in several thin sandy lenses within the Aptian interval. This is a very significant data point; this is the first oil recovered from the Aptian in deepwater and proves the efficiency of this as an oil source. This Aptian restricted marine source rock has also been encountered in a number of wells penetrated farther south of the Walvis basin along the South Africa and Namibia margin including the DSDP 361, and South African and Kudu wells.

The Aptian source rock is ubiquitously distributed over the deepwater Walvis basin, although some variation in thickness is evident, as Spectrum mapped two main depocenters divided by a northwest-southeast trending Outer High basement ridge. Above the source rock, there is a significant variation in thickness of Late Cretaceous and Tertiary sediments, which delineates where the Aptian will be mature for oil generation. In the deepwater parts of the basin, the source rock is buried below 3,000 to 3,300 m (9,843 to 10,827 ft) of sediment, pushing the Aptian into the oil window.

Having de-risked the source rock for presence and maturity, the explorers can draw their attention to the presence and effectiveness of seal and trap. The HRT well Murombe-1 also took this further in the basin by encountering a thick turbidite sand channel of Santonian age in its secondary target (Baobab sands). The well was the first to be drilled in this deepwater setting offshore Namibia and encountered 242 m (794 ft) gross section with a 15% n/g ratio and average porosity of 19%. Unfortunately, this was water wet; this could be due to a failure of up-dip trapping. However, it proves that Late Cretaceous turbidites on this margin can provide high quality reservoir sands. This turbidite channel has been interpreted by HRT as a confined channel complex system, showing high amplitude reflectors with channel-like geometry on Spectrum’s dip seismic section. Indeed, a number of Late Cretaceous high amplitude sand channels within the Baobab sands interval are clearly identified in the deepwater seismic sections on the 2D dataset farther down dip from the Morombe well location. The geometry of this sand-channel system has been mapped and was interpreted as a lower slope meandering channel system. Directly beneath the turbidite sand channels lies the Aptian source rock in the oil window, displaying a low frequency and low amplitude seismic character.

Here, a summary of Late Cretaceous high amplitude turbidite sand channels complex play is presented, suggesting a high potential oil discovery in the deepwater Walvis basin is only an up-dip seal away.

Paleotopographic reconstructions based on cooling histories (Gallagher and Brown, 1999) and erosion markers (Dauteuil et al., 2013b) suggest that the Namibia and South Africa margin has displayed an onshore uplift to at least 2 km (1.2 mi) since at least late Early Cretaceous time (100 Ma). Only three rivers are permanently connected to the South African Plateau: the Orange River in the south, and the Ugab and Kunene Rivers in the north. These rivers transported large amounts of sediment into the Atlantic and formed three offshore fans (Douteuil et al., 2013b). The Ugab River is located in Walvis Bay and has provided the sedimentary entry point in to the Walvis basin since the Late Cretaceous time. This river has its source in the South African plateau of the Congo Craton and Damara Belt and crosses the marginal bulge, a conspicuous large-scale feature close to the outcrops of the 132 - 125 Ma Etendeka flood basalt (Douteuil et al., 2013a).

Interestingly, the Etendeka volcanic province provides only around 4% of the present day sand on the famously sandy beaches of the Skeleton Coast (Garzanti et al., 2014). From the Murombe well result, it is likely that longshore drift has provided a wealth of clean, quartz-rich sand into the Walvis basin since the Early Cretaceous. Spectrum believes that the Late Cretaceous channel complexes within the Walvis basin will be comprised of clean sands with high proportion of quartz derived from the Damara Belt, containing polymetamorphic gneisses and granites (Miller, 2008) and the Congo Craton in the Southwest Angola consisting of gneiss and metasediments (Begg et al., 2009).

The presence of mature oil generative source rock below (and therefore likely to be charging) thick clean quartz rich sands is proven in this basin. All that this basin requires is the proof of trap - an up-dip bypass zone for the deposition of sediment or fault bounded. The hunt for this last risk element is on and the prize will be spectacular.