The US Department of the Interior will resume its evaluation of applications from six companies seeking permits to conduct geological and geophysical activities in the Atlantic Ocean, upon the grant of the remand by the Interior Board of Land Appeals. 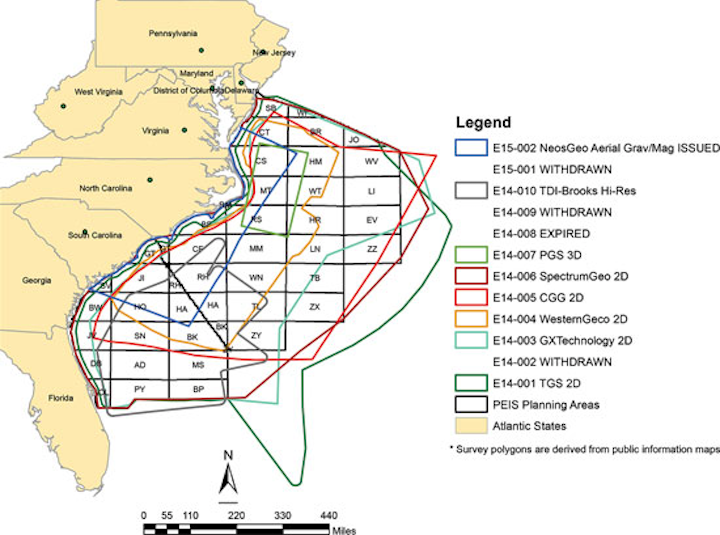 The US Department of the Interior (DoI) will resume its evaluation of applications from six companies seeking permits to conduct geological and geophysical activities in the Atlantic Ocean, upon the grant of the remand by the Interior Board of Land Appeals (IBLA).

The DoI said the decision was in accordance with Secretarial Order 3350, which implements President Donald Trump’s America-First Offshore Energy Strategy.

The action reverses a January 2017 decision by the previous administration that ordered the Bureau of Ocean Energy Management (BOEM) to deny the permit applications, which occurred in February.

ARKeX Ltd. was the first company to be issued a permit in the area, which it received in July 2015. The company fell into administration just a few months later, and the permit has expired. NEOS GeoSolutions Inc. currently holds the sole approved permit, which was issued in July 2016. Spectrum Geo Inc., SeaBird Exploration Americas, Inc., GX Technology Corp. all withdrew their applications.

Seismic surveys are not expected to have significant impacts on marine mammal populations or the environment given the use of advanced technology and other safeguards that are currently required, the DoI’s statement said.

“Seismic surveying helps a variety of federal and state partners better understand our nation’s offshore areas, including locating offshore hazards, siting of wind turbines, as well as offshore energy development,” said Secretary of the Interior Ryan Zinke in a statement. “Allowing this scientific pursuit enables us to safely identify and evaluate resources that belong to the American people. This will play an important role in the president’s strategy to create jobs and reduce our dependence on foreign energy resources.”

The government has waffled on E&P activity in the area. A 2014 record of decision opened an environmental review of G&G activities off the US Atlantic coast. In June 2016, US Representatives Mark Sanford (R-SC) and Gerry Connolly (D-VA) sent a joint letter signed by 53 other members of the US House of Representatives to then-US President Barack Obama requesting a halt to the permitting process. Then, in November 2016, the area was remitted entirely from the 2016 outer continental shelf oil and gas leasing program.

The DoI reiterated in its May announcement the previous arguments from industries bodies such as the International Association of Geophysical Contractors (IAGC) and the National Ocean Industries Association (NOIA): The last G&G seismic data for the mid- and south- Atlantic outer continental shelf (OSC) were gathered more than 30 years ago, when technology was not as advanced as today. Aside from providing data on potential offshore oil and gas resources, seismic surveys are also used to site offshore wind structures, locate potential seafloor hazards, locate potential sand and gravel resources for beach replenishment activities, and locate potential archaeological resources. Data from seismic surveys also assists the DoI in determining Fair Market Value of offshore resources.

“That decision underestimated the benefits of obtaining updated G&G information and ignored the conclusions of BOEM’s Atlantic G&G Programmatic Environmental Impact Statement and Record of Decision, which showed that no significant impacts are expected to occur as a result of these seismic surveys,” the DoI said in a statement.

Following the denial of the permit applications, the six companies filed appeals with the IBLA to have their applications reinstated. BOEM Acting Director Dr. Walter D. Cruickshank asked the IBLA to remand the six Atlantic G&G permit application denials under appeal. The remand would not approve the permits, but would allow BOEM to resume its evaluation to determine whether they will individually be approved or denied.

“BOEM’s mission is to manage the development of our nation’s offshore resources in an environmentally and economically responsible way,” said Cruickshank. “We will continue to keep the public informed as we renew our efforts to evaluate these permits.”

While the Atlantic was removed from consideration for oil and gas leasing and development in the 2017-2022 Outer Continental Shelf Oil and Gas Leasing Program, Trump last month directed the Department of the Interior and BOEM to begin development of a new national program, and the information gained from possible seismic surveys in the Atlantic will help inform future decision-making.

Zinke’s Secretarial Order 3350 implements President Trump’s Executive Order on the America-First Offshore Energy Strategy and directs BOEM to develop a new five-year program for oil and gas exploration in offshore waters and reconsider a number of regulations governing those activities.

IAGC President Nikki Martin said: “On behalf of the IAGC and its member companies, including PGS, TGS, CGG, WesternGeco, GXT/ION and Spectrum, we commend the Department of the Interior for rescinding its previous decision to deny six applications for oil and gas exploration geological and geophysical permits for the mid- and south-Atlantic planning areas. Today’s action to correct the course for sound US energy policy demonstrates this administration’s commitment to science over politics and to lawful procedures over rhetoric.”