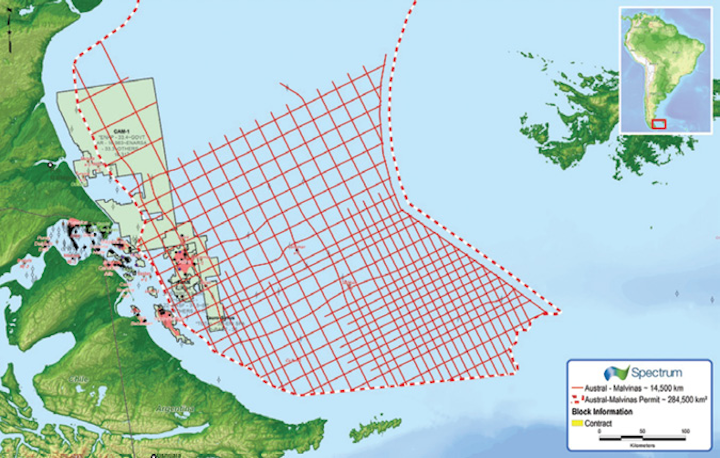 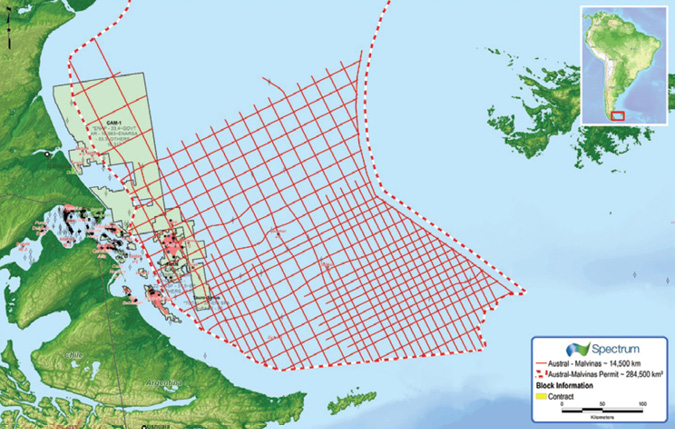 Spectrum, in partnership with BGP Marine, has started a multi-client 2D seismic survey covering the Austral and Malvinas basins offshore southern Argentina. Through the authorization of the Ministry of Energy and Minerals, the expected survey size is about 14,500 km (9,010 mi) but may vary based on input from participating clients.

Data is being acquired with a 12,000-m (39,370-ft) streamer with continuous recording to enable extended recording lengths and high fold data to enable full interpretation from Moho to water bottom. The data will be processed with PSTM, PSDM, and Broadband products with first deliveries expected in early 2Q 2018.

The new data will be used to assist the Ministry in placement and design of parcels for the future license rounds offshore Argentina.

Richie Miller, EVP Multi-Client Americas, said: “The strong support and interest Spectrum generated for the ongoing Argentine deepwater program allowed us to continue to build on our Argentinian multi-year program with the addition of the Austral Malvinas program.

“The industry appreciates the need for new, modern, long offset broadband data to help them evaluate the full potential of the area prior to the expected license round in 2H 2018. Spectrum expects to collect, process and deliver over 50,000 km [31,069 mi] of data to industry in time for these rounds.” 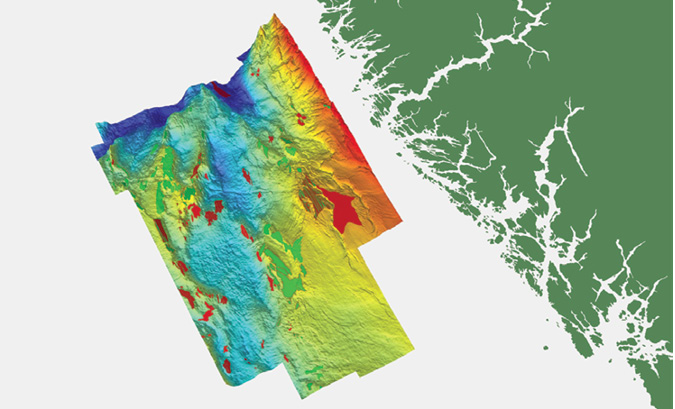 The survey was acquired during 2014-2016 in response to industry interest in this area. The resultant broadband seismic data set provides contiguous and uniform coverage over a mature offshore region, where significant accumulations of hydrocarbons are still being discovered in the established Jurassic plays.

High-resolution imaging of the shallow stratigraphy and improved imaging below the base Cretaceous Unconformity provides more accurate interpretation of potentially prospective reservoirs at all levels, CGG said.

Makai Ocean Engineering Inc.’s software was used at the full-scale sea trial of inApril’s seismic acquisition system, Venator. The trial, conducted in 110 m (361 ft) of water at the Edvard Grieg field in the Norwegian North Sea, confirmed Venator as the first seabed-based exploration tool to provide data superior to conventional-towed streamer solutions at competitive rates, the seismic equipment provider claimed. The system involves fully hands-free handling and flexible node spacing. The six-day test at the Grieg field in August was of the A3000 node.

During the trial, the MakaiLay Seismic module provided real-time feedback to inApril based on the proprietary cable model calculations to ensure that the nodes were placed on the seabed accurately during the installation, and that the cable was not over tensioned during the recovery.

Careful control during the recovery is the key to avoid dragging the nodes along the seabed. To accomplish this, the software uses inputs from all the navigation and cable control instruments on the vessel to calculate accurately in real-time the cable’s shape underwater, the touchdown position, and the slack or tension. The software can automatically adjust the vessel’s navigation and cable payout rate during the operation, or provide instructions to an operator, as was done during the inApril trial. When retrieving the nodes, MakaiLay provided the cable engine operator with values of tension at the touchdown point. The trial achieved safe deployment and retrieval speeds of 6 knots and 4 knots, respectively.

MakaiLay integrates with all the typical instruments and data available on a vessel, such as navigation (GPS, Gyro), cable data (tension, cable counter, and length), currents (ADCP), and bathymetry.