Simultaneous operations inherently require a centralized management and coordination system to integrate and visualize distributed data points and to enable communication and collaboration between disparate teams, departments, and even companies. Maersk Oil’s 2015 and 2016 4D monitor surveys each had at least 14 surface obstructions the seismic vessel had to avoid in its operating area. Typical project planning software could not efficiently cope with the operational complexity or communication volume pertaining to these offshore environments. A new offshore operations management system, Marlin, was developed by ION Geophysical to address these challenges to make these projects safer and cheaper, while also optimizing the overall quality due to improved 4D seismic

Production optimization is a hot topic in the E&P industry. 4D seismic programs are increasingly employed to improve oil recovery, but are challenging to execute safely and efficiently. Also known as time-lapse surveys, the goal is to mimic the prior survey as closely as possible to detect subtle changes in reservoir fluid movement over time, with time as the only variable. However, precisely matching source and receiver positions to prior surveys is challenging due to variability introduced by ocean currents and in-field obstacles.

To effectively manage operations, especially in busy producing fields where 4D surveys typically take place, an operator requires situational awareness of what is going on around them. Today, offshore operations are often managed manually via spreadsheets with information pieced together from emails, phone calls, and radio discussions with nearby operators. In active fields, operations are increasingly complex and may require a full-time representative to coordinate activities among multiple parties by emailing plans that are quickly out of date in a static format that cannot comprehend or keep up with all the moving parts.

Maersk Oil’s 2015 and 2016 4D monitor surveys each had at least 14 surface obstructions the seismic vessel had to avoid in its operating area. In addition, the busy producing fields had formidable SIMOPS (simultaneous operations) challenges from a host of maritime traffic including platform supply vessels, tanker loading and anchorages, pipelaying, diving, ROV inspections, and fishing activity. There was the potential for unnecessary and costly downtime (multi-vessel seismic crew day rates can reach $200,000) or to even be “locked out” of areas later in the survey due to scheduling conflicts, creating holes in the data coverage.

Typical project planning software could not efficiently cope with the operational complexity or communication volume pertaining to these offshore environments. Marlin was developed to address these challenges to make these projects safer and cheaper (due to a reduced turn-around), while also optimizing the overall quality due to improved 4D seismic repeatability. 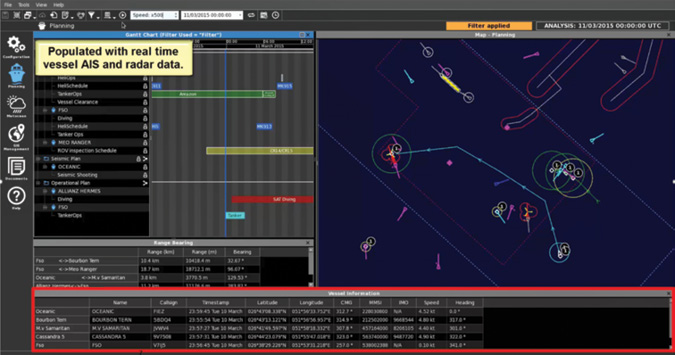 A new approach to SIMOPS

SIMOPS inherently require a centralized management and coordination system to integrate and visualize distributed data points and to enable communication and collaboration between disparate teams, departments, and even companies to optimize multiple operations.

A new offshore operations management system, Marlin, was created for this exact challenge. Marlin provides an opportunity to proactively manage in real time all ongoing and planned operations and avoid potential conflicts where expensive assets are involved, and any delay is extremely costly. In some cases, it may even prevent accidents from occurring.

The addition of Marlin to the 4D solution allows seismic plans to be represented alongside planned and actual activity for all operations in the area, enabling effective survey line planning while minimizing operational disruption. The authors found four components critical to SIMOPS success and built them into the offshore operations management system.

3. Infrastructure to communicate and collaborate, both onshore and offshore

In addition to the proprietary 4D planning tools employed, a catalog of various SIMOPS events was logged as acquisition of each survey approached. In addition, the operator specified a priority list for all operations across the field, which proved invaluable in reducing confusion of the many possible combinations of SIMOPS conflicts.

By the time the seismic vessel arrived on site, SIMOPS schedules were under way and personnel on other in-field operations were aware of the seismic operations methods and requirements.

The software was used for day-to-day acquisition planning and longer-term macro planning.

Marlin is the only commercially-available system that combines spatial information to visualize in-field operations with temporal information to comprehend what is happening over time in a calendar. The combination of time and space improves situational awareness by allowing users to see relationships more obviously, such as when areas are restricted or accessible and when other operations have conflicting events. By time-sliding forward through plans, dedicated SIMOPS operators were aware whether events were on schedule or not and rules-based monitoring automatically alerted them of potential conflicts.

Infrastructure to communicate and collaborate

The offshore operations management system was installed in the field and onshore for each survey with dedicated SIMOPS operators providing 24-hour support to proactively manage operations, communicate with other in-field operators, and update the system. The communication flow between stakeholders was critical to collating comprehensive SIMOPS information and proactively addressing potential conflicts. An additional linked system installed on the seismic vessel was automatically updated continuously, enabling the seismic crew to use the latest SIMOPS data when compiling 24-hour look-ahead plans and applying for close pass permits. 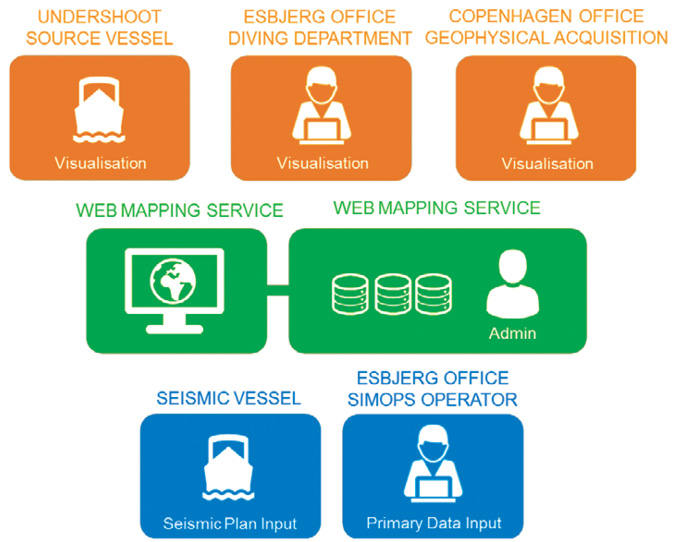 Architecture of cloud-based shared visualization facilitating communication and collaboration of all operational stakeholders in a given area.

The true test of course is the impact these tools and practices had during operations. The SIMOPS system was used for day-to-day acquisition planning and longer-term macro planning. There were several cases where monitoring SIMOPS allowed the operations to be adjusted proactively to avoid conflicts.

For example, floating storage and offloading (FSO) tanker offloads were particularly challenging. Spatially, they occurred in the area unaffected by flow assurance project work, with an exclusion zone of 2,000 m (6,562 ft), which often blocked access to many of the remaining available seismic acquisition sail lines. Temporally, the tanker schedule was relentless and ever-changing – there were 48 tanker offloadings during the seismic survey. Tankers were often not on schedule and official notification of schedule changes would only occur after a tanker appeared early or failed to appear. In this environment, the ability to ‘see’ the precise location of each tanker via AIS and radar versus the seismic vessel’s planned route was significant.

The schedule of planned back-to-back offloading was often altered so drastically that the current acquisition plan would no longer be viable. Marlin made this apparent to SIMOPS operators in sufficient time that the acquisition plan could be updated, rather than aborting a sail line or a making a detour. This process improved the quality of data acquired in addition to reducing the HSE risk for the seismic acquisition.

When offloading finished ahead of schedule, the FSO crew could see the planned route of the seismic vessel, enabling them to release the tanker early with confidence that there were no route conflicts and thereby reduce the risk of vessel collision.

This common view enabled multiple stakeholders both onshore and offshore to share and visualize vessel route plans, foresee and avoid conflicts between vessels and fixed assets, optimize schedules safely within a rules-based environment, and measure and improve asset performance. This resulted in a safe, highly efficient operation for all parties involved. 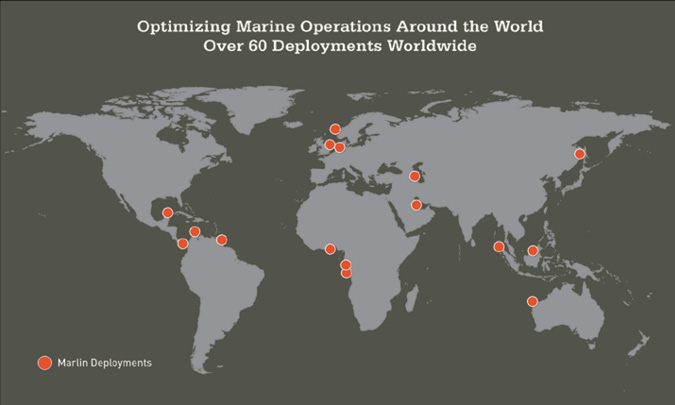 Post-mission play back and analysis

The system provides shared real-time views for onshore and offshore personnel, customized reports and dashboards, and post-mission analytics with specific event playback from the Marlin database. The software consistently unites and engages personnel across activities and is proving invaluable around event transparency – almost every project is followed by requests for extensive mission playback from the system. For example, during the survey a line was aborted; and during the break-off around platforms, it was unclear whether the chase vessel maintained a safe distance from the seismic vessel. The historical playback could confirm exact offsets between vessels at all times.

Both 4D surveys lasted more than 100 days each and were completed in complex operating areas without any unplanned downtime from SIMOPS. The data quality was excellent, the repeatability was good, and more data coverage was acquired than expected. In addition to helping prevent disruptions and potential HSE incidents, an additional unforeseen benefit was the value in reducing SIMOPS downtime for other operations in the area.

Marlin has been deployed for a broad range of use cases, growing from 39 installations at the beginning of 2017 to 61 today. These deployments have spanned marine operations in ice, optimization of time-lapse seismic surveys co-mingled with busy oil and gas operations, autonomous underwater vehicle flight planning and optimization, integrated offshore activity planning, and shore-based marine control centers. The software supports a step change offshore as the industry moves from traditional manual processes to digital solutions that integrate and share information in real time to enable better, safer decisions.