Recent concern about the volatility of the Cascadia offshore fault zone may create similar interest in the offshore oil and gas industry about the vulnerability of offshore structures to major earthquakes. 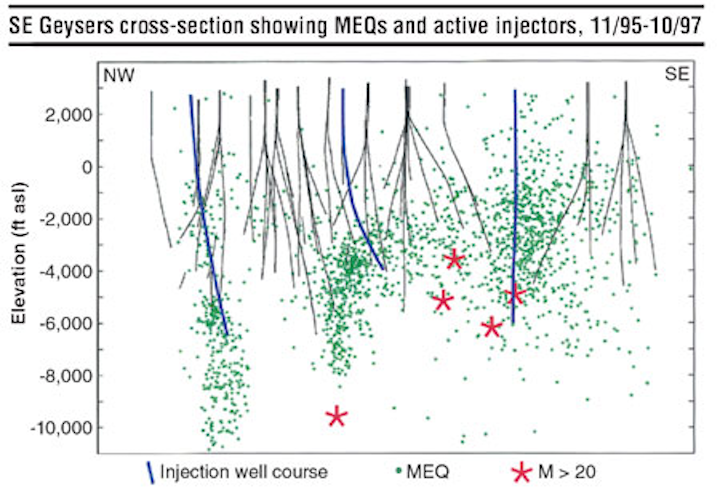 Recent concern about the volatility of the Cascadia offshore fault zone may create similar interest in the offshore oil and gas industry about the vulnerability of offshore structures to major earthquakes. According to research published by the Bulletin of Seismological Society of America (BSSA), seismic activity on the southern Cascadia Subduction fault may have triggered major earthquakes along the northern San Andreas Fault. The research refines the recurrence rate for the southern portion of the Cascadia Fault, which runs from British Columbia through Washington and Oregon and into Northern California, to approximately every 220 years for the last 3,000 years.

An Oregon State University research group led by Chris Goldfinger, associate professor of marine geology and geophysics, used marine sediment cores collected along the northern California seabed to identify 15 turbidites. These are sediment deposits generated by submarine landslides and commonly triggered by earthquakes. The 15 turbidites, including one associated with the great 1906 earthquake, and the corresponding land paleoseismic record, establish an average recurrence rate of about 200 - 240 years for the San Andreas Fault.

In a parallel study, they found that during the same period, 13 of these 15 San Andreas earthquakes occurred at almost the same time as earthquakes along the southern Cascadia Subduction Zone. The marine and land paleoseismic record suggest a recurrence rate of approximately 220 years for the southern Cascadia Fault, which is substantially shorter than the 600-year cycle suggested by previous research for full ruptures in Cascadia.

“It’s either an amazing coincidence or one fault triggered the other,” said Goldfinger. The generally larger size of the Cascadia earthquakes and the timing evidence suggests Cascadia may trigger the San Andreas. While Cascadia activation of the San Andreas Fault would imperil northern California, the complex system of natural fractures and faults off the coast of California could lead to earthquakes further south, which have the possibility to impact/damage offshore facilities in the southern part of the state. New studies confirm this potential.

The latest research into the little known, fault-riddled, undersea landscape off of southern California and northern Baja California has revealed more worrisome details. According to an American Geophysical Union report in Science Daily (May 29, 2015), a tectonic train wreck in the Earth’s crust has the potential for 7.9 to 8.0 M earthquakes. The new study supports the likelihood that these vertical fault zones have displaced the seafloor in the past, which means they could send out tsunami-generating pulses toward Los Angeles and neighboring San Diego.

“We’re dealing with continental collision,” said geologist Mark Legg of Legg Geophysical in Huntington Beach, California, regarding the cause of the offshore danger. “That’s fundamental. That’s why we have this mess of a complicated logjam.”

Earthquake danger to oil and gas activities is not a one-off event related to the coast of California. A recent study by ABS Group (Offshore Oil and Gas: Experience and Capabilities, 2014) reviewed and updated seismic hazard estimates for 11 BP offshore platforms in the Columbus basin offshore the southeastern coast of Trinidad. A regional model was developed for probabilistic seismic hazard assessment. Incorporated within it were models of shallow active faults along the Caribbean - South American tectonic boundary zone and models of deep earthquakes related to remnants of ancient subducted plates in the region. The seismic assessment fulfilled new ISO 19901-2-2004 seismic criteria for offshore structures and provided BP with a comparison of ground motions for which the platforms had been previously designed.

In a second study, ABS Group investigated the consequences of rare but damaging earthquakes for ExxonMobil within the Gippsland basin, Bass Strait, off Australia. The group developed site-specific seismic design criteria for offshore facilities, including drilling and production platforms, pipelines, jetties, a marine loading terminal, and their supports and foundations. It then performed a probabilistic seismic hazard assessment that incorporated an explicit accounting of model uncertainty through the use of a logic tree sampled with Monte Carlo simulation. The resulting probabilistic estimates of the ground motion hazard provided ExxonMobil with engineering seismic design criteria that fulfilled international and local seismic standards for the various engineered elements of the development.

Operated by Gazprom with partners Shell, Mitsubishi, and Mitsui, another set of offshore structures are subject to seismic activity lies a few kilometers off Sakhalin Island, in the world’s most active earthquake zone, a zone linked to the devastating Fukushima incident offshore Japan. GeoSIG supplied the development with a seismic monitoring and rapid response system that, in case of an earthquake, measures the local accelerations; generates a detailed shake map; compares the accelerations with the design limits of the facilities, and generates alarms accordingly. The supplied instrumentation consists of field stations with borehole accelerometers and intelligent seismic recorders with associated peripheral equipment designed to work under the harsh environmental conditions. In addition, a system central cabinet is supplied, featuring hardware and specialized software to facilitate full configuration, operation, and interfacing within operator Sakhalin Energy Investment Co. Ltd.’s (SEIC) local and remote systems. The GeoSIG Shakemap software application has been extensively customized to meet the specific requirements of SEIC including the addition of an online interactive web-based interface.

Utilizing the GeoSIG system, SEIC can very quickly analyze the effect of an earthquake and determine if it is safe to continue to operate if it should shut down for inspection. It will also greatly help SEIC in estimating where to focus the inspection efforts and possible emergency response. In addition to the notification system and a response structure, Sakhalin has been earthquake-proofed to the fullest extent possible. A structure used to protect bridges and public buildings from earthquakes was installed in offshore platforms for the first time at Sakhalin 2. Two of Sakhalin 2’s platforms are connected to their concrete legs by sliding joints. If an earthquake strikes, the topsides can move independently from the legs in a pendulum motion, preventing damage. The design can withstand an earthquake measuring 8.0 on the Richter scale - greater than the strongest earthquake expected to occur around the platforms. Such an earthquake may occur on Sakhalin Island perhaps once in 3,000 years. A similar design protects San Francisco’s Oakland Bay Bridge and Istanbul’s Ataturk Airport.

Speaking on the danger along the US Pacific coast to the Pacific Northwest Seismic Network blog on Dec. 28, 2011, Professor John Vidale, University of Washington seismologist, noted, “Our coast, like other subduction zones around the world, rattles in magnitude (M) 9 earthquakes every few centuries. The stark results of m9 events in 2004 in Sumatra and 2011 in Japan have made forecasting the likelihood and details of our local megaquakes a priority for geologists, emergency responders and planners.”

It is clear that earthquakes will happen in offshore oil and gas producing areas at some point. It is also clear that the industry is aware of the potential danger and has attempted to prevent and/or mitigate potential damage. What cannot be predicted is the strength of these possible earthquakes themselves. Most of the earthquake protection installed on offshore facilities is rated to m8 and below. Fukushima was m9+. Cascadia will likely be m9+, as may other events. While the possibilities of a catastrophic earthquake in an offshore oil and gas province are small, they do exist.

In response to these threats, sensor systems previously tested by the US Department of Energy’s National Energy Technology Laboratory have the potential to provide early warning of major earthquakes the could impact oil and gas producing areas, both onshore and offshore. This type of system would be comprised of a network of deep micro-holes drilled with equipment developed by NETL. Downward looking vertical seismic profiling (VSP), and other relevant microseismic monitoring equipment, would be installed to detect subtle movement in the deep subsurface that would presage an earthquake, allowing time for preparation and evacuation. The micro-hole with VSP technology has been successfully tested and operated in a project to provide reservoir analysis in limited NETL field demonstrations.