The aim here is to describe how the creation of the industry's only integrated onshore and offshore seepage database offers the industry a high-quality exploration screening tool. 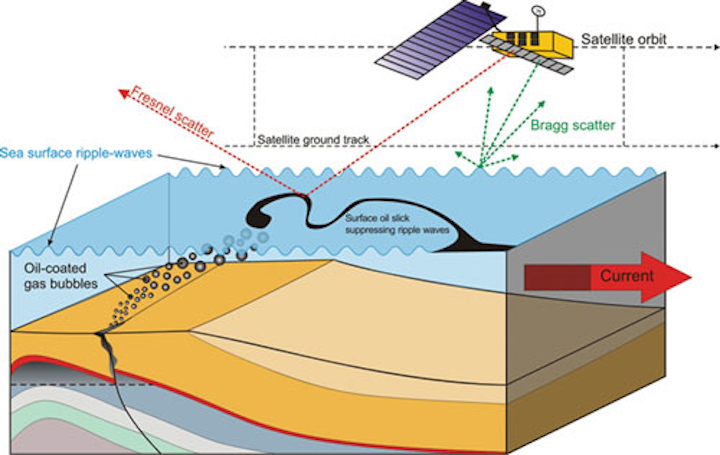 Natural oil seepage at the surface is a dynamic component of petroleum systems and can be an important indicator of economically significant hydrocarbon accumulations. Historically, such sites have guided explorers to many of the world’s major oil discoveries, such as Spindletop, Texas (1901) and Kirkuk, Iraq (1927). Almost all petroleum basins leak but not to the same degree, so a way of assessing the distribution and intensity of seepage is needed.

Seepage data has now become part of the routine exploration workflow and is a recognized and valuable tool for new ventures and exploration teams. However, there is no single, universally applicable detection technique.

Offshore, remote sensing data can be used by expert interpreters to identify oil seepage locations across large areas in a cost-effective and timely manner. Onshore, however, interpreting remote sensing data for seeps is more complex and convincing examples are far fewer than for offshore. The challenge that geoscientists face is how to use these different datasets in a consistent manner and how to understand the uncertainties associated with each method.

The aim here is to describe how the creation of the industry’s only integrated onshore and offshore seepage database offers the industry a high-quality exploration screening tool.

Offshore seep detection by satellite remote sensing uses Synthetic Aperture Radar (SAR). The technique was pioneered by CGG GeoConsulting’s NPA Satellite Mapping group (NPA) as part of a joint research project with the British National Space Agency (BNSC, now UK Space Agency) in 1991. SAR is an active instrument that uses radio waves (typically with wavelengths between 2 and 30 cm) to image the surface of the Earth. They have the significant advantage of being able to image day and night through all but the densest cloud.

Oil seepage slicks are formed when oil is transported to the ocean surface either as discrete oil bubbles or more typically as an oil-coated gas bubble, where the bubble bursts and leaves behind an oil film. Over time, the oil films coalesce and form oil slicks that are large enough to be detected by SAR. The detection of these slicks relies upon the physical properties of oil (i.e. viscosity and elasticity) and their dampening effect on waves in the mm to cm wavelength that populate the sea surface at low to moderate wind speeds. It is literally the act of “pouring oil on troubled waters” that is being observed. The SAR instruments image at an oblique angle so the effect of a smooth area caused by an oil slick is that energy is reflected away from the sensor and the slick is imaged as a dark area of low return.

The flatter areas on the sea surface that SAR detects can have various origins, not all of them being natural seepage. This means there are uncertainties in the interpretation of the SAR images which require specialized expertise to unravel. Interpretation is undertaken by experienced professionals who expertly discriminate oil and non-oil slicks, then between natural oil seeps and pollution, based on the characteristics of the slicks. Slicks are classified using a number of criteria including: shape, size, edge characteristics, distribution, location, and temporal repetition (across multiple SAR images taken over a period of time). While the process is robust and discrimination can be achieved with a high level of confidence, it is subjective and contains an inherent uncertainty until the slicks are validated against collateral datasets.

The interpretation technique developed by NPA has successfully identified seepage in multiple deepwater basins prior to the main phase of discovery. One of the most successful examples of the technique was in deepwater off Angola, where NPA seeps data indicated the presence of an active petroleum system in the mid-1990s ahead of any in situ exploration. These deepwater blocks have now been drilled with a succession of major discoveries made by BP, Total, and ExxonMobil.

Uncertainty in the offshore remote sensing data and ambiguity in the source and accuracy of the existing onshore reference data therefore require a high degree of standardization and validation to provide a robust and reliable evaluation dataset. To achieve this, CGG GeoConsulting has recognized the need to bring together these disparate datasets into a single coherent database with a consistent ranking scheme and assembled a new reference library which standardizes all existing onshore and offshore data under its “Seep Explorer” product suite.

Offshore, the aim was to supplement the remote sensing data with all existing evidence of seep-related fluid features (such as mud volcanoes, pock marks, chemosynthetic communities, and seismic direct hydrocarbon indicators (DHI) such as phase reversals, flat spots, gas chimneys, water column gas plumes or slicks sampled at the surface from a variety of sources and create a fully interactive GIS layer. The strength of the association of the fluid features with the remote sensing data can then be assessed. For example, a seep sampled at the surface revealed to be from a thermogenic source would score very highly. These positive indicators include various features with a strong association with seepage, such as seabed mud volcanoes, pock marks and seismic DHIs, which would receive a high rank in the scheme. They may also include more subjective associations such as deep faulting, which extends to the surface and may provide a plausible migration pathway, but do not have direct evidence of oil migration, which would therefore be ranked lower.

The new offshore reference data in Seep Explorer allows for an additional validation of the existing Global Offshore Seepage Database (GOSD). The strength of the associations as well as the distance between the interpreted slick and the recorded feature can then be weighted and ranked to provide an assessment of the offshore seepage slick’s plausibility.

The task onshore is far less subjective as the features have usually been directly recorded, sampled and, in some cases, geochemically analyzed. This means the main uncertainty is the reliability of the source material or location rather than whether the feature is associated with hydrocarbon seepage. After recently acquiring the Global Oil Gas Onshore Seepage Database (GLOGOS) from Gas Consult, CGG GeoConsulting also combined and harmonized its data with that of its Frogi onshore seepage categorization scheme.

The product now contains more than 15,000 onshore attributed data points (and more than 31,000 features including offshore), with many also containing geochem analyses and therefore enabling a user to draw his or her own conclusion as to the significance of the features.

The integration of the GOSD, Frogi seeps, and GLOGOS reference databases has for the first time created an attributed global on- and offshore seepage reference dataset. Uniquely, it addresses the uncertainty involved in seep interpretation by combining validation data with a rigorous ranking scheme. This allows exploration opportunities around the world to be benchmarked in a consistent and transparent manner. The new system is continually expanding as more data becomes available. More than 25,000 SAR images have been interpreted with ~2,500 additional scenes analyzed each year; most basins now have five-fold coverage, which increases the confidence in seep interpretation. The opportunity to incorporate proprietary information is also included and the scheme can easily ingest the user’s own data. A positive feedback process has been created to allow for the verification and increased confidence of the existing offshore seepage database.

Through the combination of these database products, CGG GeoConsulting has created the standard go-to dataset when reviewing frontier acreage and reducing the source risk of prospects through both the identification and validation of petroleum seepage.