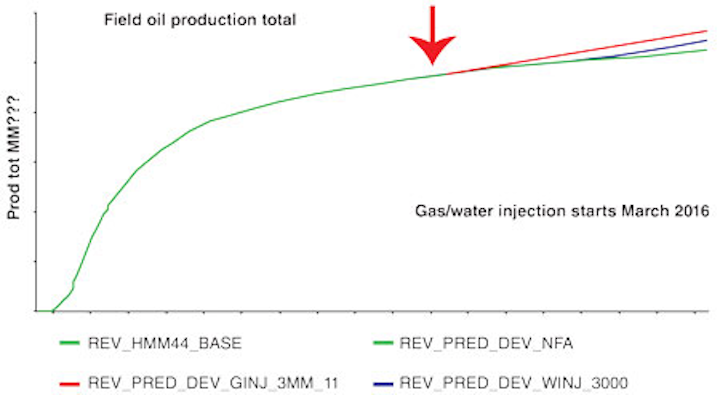 Reservoir modeling remains a powerful and highly important decision-making tool in the upstream oil and gas sector. By building a realistic representation of the geometry of the reservoir, operators can accurately map out fluid flows and volumes and make robust field development decisions. This article will illustrate the impact of reservoir modeling on a mature and geologically complex field offshore the Middle East, with the software suite used playing a key role in exploring its upside potential.

Located in one of the best-exposed continental rifts of the late Cenozoic Gulf of Suez basin, the operator’s objective was to evaluate and explore the upside potential of the field, which has been producing since the 1990s. Challenges, however, included complex geology and tectonics with a highly titled and dipping structure.

The reservoir was also characterized by the presence of Tarmat, an oil debris, acting as a barrier between the reservoir and the aquifer. Similar to heavy oil, Tarmat controls the degree of intercommunications between the aquifer and the oil column. It can affect production due to lack of aquifer pressure support. Therefore, reservoir management was a key issue, as the field had shown a steep reservoir pressure decline over the previous four years.

The maximizing of production through the use of secondary recovery and appraisal drilling was also highly challenging at such low pressures, as was the communication between the different blocks.

Emerson’s Roxar reservoir management software suite, RMS, and its structural modeling and seismic interpretation tools were deployed to generate a conceptual model of the field and quantify the fault location uncertainties.

This was achieved through seismic interpretation, followed by the creation of a 3D unified grid, and then the calculation of gross rock volume (GRV) uncertainty. The structural model generated was bound by clysmic faults and cross faults.

A grid was then created out of the structural model to calculate GRV uncertainty. Due to the poor seismic quality, there were positional uncertainties relating to the clysmic faults and the horizon interpretation away from the wells.

In addition, the user carried out a property modeling workflow. This included the pixel-based facies modeling of sand, shale, and silt using a combination of a vertical proportion curve and a lateral trend in the upper most heterogeneous region (Matula and its subdivisions). The petrophysical parameters (porosity, permeability and water saturation) were also populated based on distributions from well and core data.

In this uncertainty analysis and history matching process, the main parameters used were the rock permeability; the communication between reservoir blocks; and the saturation functions. The result was an acceptable history match based on the model. The Nubia and Matulla reservoir pressure performances indicating that both reservoirs are in good communication, acting as one single material balance tank with the developed blocks communicating well.

As a result of the reservoir modeling and history-matching workflow, the user was able to provide specific input as to how production could be increased in the field.

In addition to the reservoir modeling workflow pointing to gas injection as being the most effective way of increasing production, future blocks for appraisal drilling - located in the southeast part of the field - were also newly identified. The blocks have the pre-rift reservoirs as a primary target and are separated from the producing field by cross faults.

Using data collected from the wells in the developed blocks, including production cumulatives and pressure, the operator was able to identify the field’s oil in place as a tank model and compare it with in-place volumes from the static and history matched dynamic model.

Economic evaluation was performed for multiple field development plans using different combinations of strategies in development and appraisal blocks, helping the operator select and design the final development plan. It was also crucial for assessing the incremental costs and benefits of the project, and ranking the development plans based on the net present value or internal rate of return.

Through combining structural uncertainty quantification, oil-water contact, and stochastic parameter uncertainties, the field was found to have an upside potential of 0.36 times existing production. This was due to an extra block being identified.

RMS’s integrated reservoir management software suite and domain expertise played a key role in exploring the upside potential of this mature and geologically complex field. Through building a structural model of the field and evaluating a number of scenarios, the workflow provided crucial input into future development decisions.