As mandated by the federal government, so-called "idle iron" – wells, platforms, and pipelines that are no longer producing or serving exploration or support functions related to the company's lease – are being removed from the Gulf of Mexico. Versabar and Chevron teamed up with the intent of producing a safer, more efficient, and environmentally-friendly method of severing subsea structures. Their goal was to find a way to cleanly sever jackets and conductors 15 ft below the mudline with a minimum of direct personnel exposure and at the same time remove the accompanying structures following completion of the cutting operation. 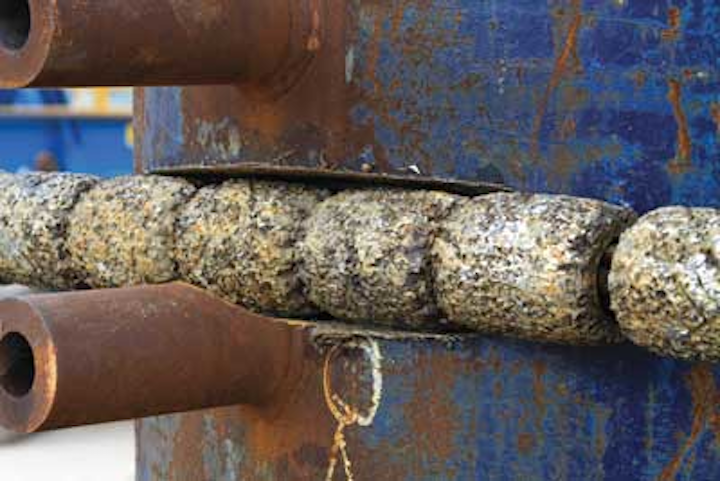 As mandated by the federal government, so-called idle iron – wells, platforms, and pipelines that are no longer producing or serving exploration or support functions related to the company's lease – are being removed from the Gulf of Mexico.

Since October 2010 when the Bureau of Safety and Environmental Enforcement's (BSEE) Notice to Lessees mandate was issued, the removal of non-producing or damaged platforms (estimated to be as many as 650 at that time) has become an urgent matter for offshore operators. According to BSEE, not only do these damaged platforms pose a threat to the environment due to potential collapse under hurricane conditions, but they are also considered hindrances to navigation and to the safety of workers who are tasked with the repair or the removal of these structures.

Topside removal can be accomplished by welder's torches and derrick barges. However, the jackets or caissons upon which they stand present a more complex set of issues. These structures require the use of pile jetting along with mechanical or abrasive cutting devices or explosive charges, as they must be severed a minimum of 15 ft (4.6 m) below the mudline. In some cases, when internal cutting is not an option, operators must excavate below the mudline and send down divers with external cutting devices to perform the task. All of these processes present technical and operational challenges and involve considerable offshore exposure of personnel and marine assets. Versabar and Chevron teamed up with the intent of producing a safer, more efficient, and environmentally-friendly method of severing subsea structures. Their goal was to find a way to cleanly sever jackets and conductors 15 ft (5 m) below the mudline with a minimum of direct personnel exposure and at the same time remove the accompanying structures following completion of the cutting operation. An additional consideration was to accomplish these objectives without the damage to the marine environment caused by explosives.

While Versabar committed to engineer a working prototype, Chevron provided a 250-ton caisson-mounted topsides 3 mi (5 km) offshore near the Texas-Louisiana border to test the prototype.

Versabar President Jon Khachaturian said the challenge of the project was twofold. First, the company had to develop a cutting wire powerful enough to cut through piles and conductors with internally grouted casing strings. Second, it had to design a delivery system for the cutting wire.

Over a two-year period including months of testing at the company's Belle Chasse and Houston facilities, Khachaturian and his engineering team determined that the optimum cutting solution was a standard 2½ wire rope threaded with custom-engineered tungsten-carbide beads 6 in. long and 4½ in. in diameter.

Meanwhile, the company's engineers addressed the delivery system for the cutting wire. They needed to develop a structure strong enough to support the wire during the cutting process while affording the capability to penetrate and anchor itself to the sea-bottom to maintain operational stability. It also needed to accommodate the winches, hydraulic power units, and other equipment needed to operate the system.

Khachaturian said the Versacutter prototype was purpose-engineered to be used in conjunction with the VB 10,000 heavy-lift vessel. The result was a lift frame composed of two multi-pronged anchor arms to stabilize the cutter in place, and two sharply pointed digger arms to penetrate the mud with the cutting wire and guide it into position against the structure. The 1,300-ton cutting frame itself was lowered from the twin gantries of the VB 10,000, which also provided the deck space needed for the winches, hydraulic power units, and operators' stations.

On April 22, 2014, after dockside testing was complete, the prototype was deployed to the project site. With anchor arms and digger arms working in unison, the cutting wire sawed through the mud and cleanly severed the 60-in. caisson along with both internal and external conductors, a total of eight interfaces of steel and concrete. Total elapsed time for the entire process was 10 hours. "As far as personnel exposure goes, our technicians basically stood by and watched while the cutter did its job," said Khachaturian.

Following the successful cut, the VB 10,000 lifted the entire structure and carried it back to port where it was placed on a barge for the trip to a salvage facility, completing the assignment.

Ian Todd, Versabar's director of Marine Projects, said: "One of the most important features of this approach is that it removes the uncertainty that often accompanies conventional cutting methods. This system proves the cut by passing the wire through. You make the lift and go home."

Khachaturian and his team are quietly confident of the future of their technology. "Given what we learned by developing and operating the prototype, we're building a production model that will give us a powerful, efficient, and reliable cutting system which can be deployed on a wide range of structures in differing water depths," said Khachaturian. "Most important to the decommissioning industry, it will be an environmentally friendly and remotely operated system. We feel that this technology can have a positive impact."

Peter Devine is a widely-traveled Houston-based writer, photographer, and graphic designer who serves as Versabar's director of publications. For 20 years, he has photographed and written about offshore Gulf of Mexico projects, including extensive coverage of the company's offshore heavy-lift vessels, Bottom Feeder and VB 10,000. More of his work can be found atwww.apeterdevine.com.