In its 2017-2021 Floating Production Systems Outlook Report, Energy Maritime Associates has analyzed the activity in 2016, recent industry trends, and conducted a sentiment survey to develop a forecast for all floating production systems: FPSO, FLNG, FSRU, TLP, spar, semi, and FSO. 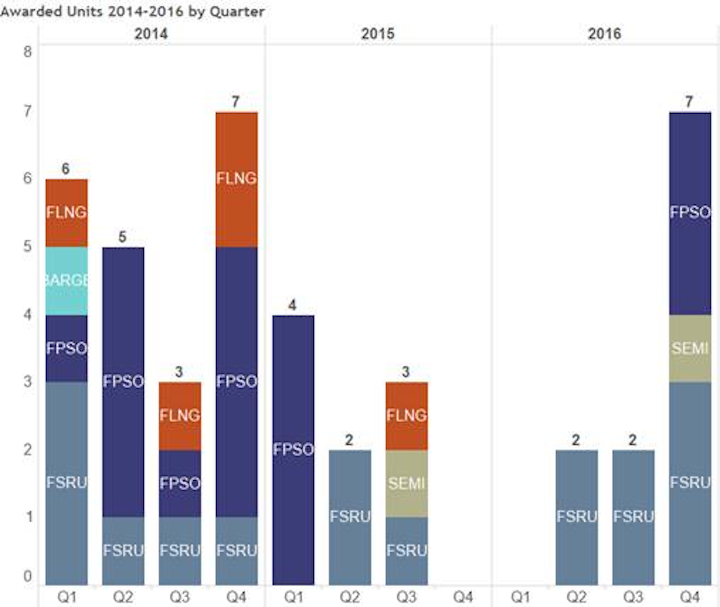 First, the report reviewedlast year’s predictions. These noted that the last two downturns in 2004/5 and 2009/10 saw sharp rebounds the following year. “This is not the case for our current situation, as oil prices are anticipated to remain lower for longer,” last year’s EMA report had noted. “We expect 2016 to see similar levels of orders as 2015. Few, if any, major awards will be made in the first half of 2016, but, there are a number of large developments in FEED that could be sanctioned by the end of 2016.”

Last year’s report had also predicted that “fundamental reforms,” including standardized designs and closer collaboration, “will reduce the costs for offshore hydrocarbon developments and result in new orders for floating production systems.”

The latest report then reviewed last year’s results, which indicated that:

Looking to the future, the new report indicates that between 83 and 168 floating production systems are expected to be ordered over the next five years, with a mid-case forecast of $86 billion to be spent on 119 units. Given the early signs of a recovery, the outlook has been revised slightly from last year, with 10% more FPSOs, FSRUs, and production semis expected in the mid-case scenario.

However, fewer FLNGs are projected due to an excess supply of LNG expected to last through at least 2020 and lack of interest in new mega-projects.Prelude-size FLNG units are not expected in the next five years, except perhaps one unit in the high-case scenario. FPSOs remain the largest segment with almost 40% of orders and 65% of capex. Petrobras is expected to resume ordering FPSOs after a two-year hiatus. Over $25 billion is expected to be spent on FPS projects in Brazil, largely driven by a series of FPSOs for the massive Libra development.

The latest EMA report also notes that 51 floating production systems are currently available, including 25 FPSOs, 10 production semis, eight FSOs, six MOPUs, one FLNG, and one spar. This is almost double the number of available units from last year. Moreover, another 61 units may come available in the next two to three years. More than half of these idle units will be scrapped, while others may be laid-up for years before finding new employment. About 20% of these units will be redeployed, driven by demand for low-capex, cost-effective, and quick developments.

The report also noted that most of the leading FPSO contractors have at least one idle asset. When it comes to their idle assets, some contractors will be willing to accept more flexible commercial arrangements, including field equity and/or payment linked to oil prices and production. EMA says that it has analyzed all these assets and identified which are most likely to be scrapped and which are the most likely units to be redeployed.

According to EMA’s managing director David Boggs, awards of floating production units resumed at the end of 2016, with three FPSOs, three FSRUs, and one production semi ordered. “We view this as the beginning of a recovery, albeit a gradual one,” Boggs said. “Many companies are still cashflow-constrained and rising costs could easily threaten the viability of many deepwater projects. Well-funded companies will be able to take advantage of low industry costs, while smaller operators and contractors will need to share the risks and rewards in order to sanction new offshore developments.”