Wintershall and partners Petoro and Spirit Energy have started oil production at the Maria field in the Norwegian Sea a year ahead of schedule. 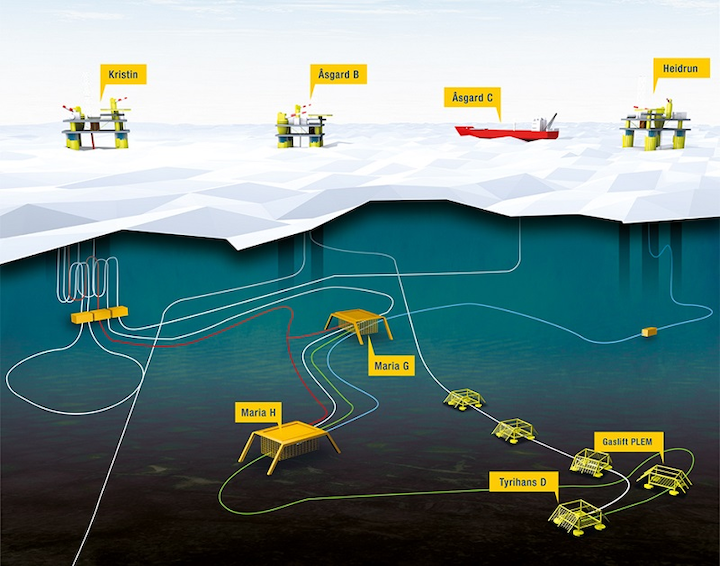 KASSEL, Germany– Wintershall and partners Petoro and Spirit Energy have started oil production at the Maria field in the Norwegian Sea a year ahead of schedule.

Development costs were more than NOK3 billion ($358 million) lower than the originally budgeted figure of NOK12 billion ($1.43 billion), submitted in theplan for development and operation in 2015.

This was also Wintershall’s first operated project in Norway, all the way from exploration, through development and production. Its current Norwegian production is now around 100,000 boe/d.

Hugo Dijkgraaf, Wintershall Norge’s Managing Director and until recently Maria Project Director, said: “Construction and installation of the subsea equipment and pipelines was completed without any major problems or delays, and this summer we drilled some of the most efficient wells in the history of the Haltenbanken area.

“This excellent progress would not have been possible without the cooperation of Statoil as operator on the host platforms. Maria is a role model for an outstanding cooperation between operators and suppliers.”

Wintershall awarded more than 90% of all Maria contracts to companies based in Norway.

Maria is connected via subsea tiebacks to the Statoil-operated Kristin, Heidrun and Åsgard B production platforms, making it one of the most complex underwater projects in the world, Wintershall claimed.

Tying the facilities into local infrastructure, with a planned 25-year life span, also helps prolong the producing life-span of the surrounding fields, the company added.

Maria’s wellstream will head to the Kristin platform for processing while supply of water for injection into the reservoir will come from the Heidrun platform and lift gas will be provided from Åsgard B via the Tyrihans subsea template.

Processed oil will be shipped to the Åsgard field for storage and offloading to shuttle tankers, with gas to be exported via the Åsgard Transport System to Kårstø.

The Maria field is 20 km (12.4 mi) east of the Kristin field and 45 km (28 mi) south of the Heidrun field. Recoverable reserves are estimated at around 180 MMboe, of which the majority is oil.

Martin Bachmann, Wintershall Executive Board Member for Exploration and Production in Europe and Middle East, said: “The experience gained in the Maria project will serve as a blue-print, for our Nova development, previously known asSkarfjell, and worldwide.”