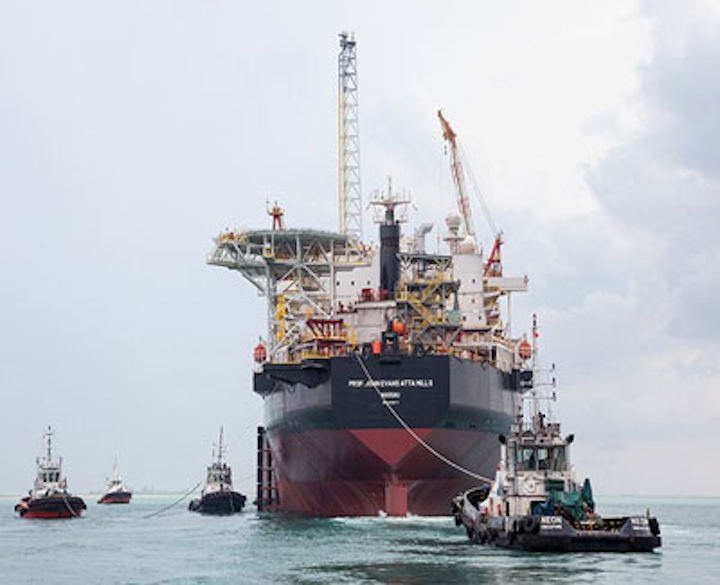 The mooredFPSOProf. John Atta Mills is being connected to the subsea infrastructure via the risers and umbilicals. Commissioning of these systems is under way.

Six of the 11 pre-drilled wells have so far been completed, while the subsea installation campaign, comprising around 35,000 metric tons (38,581 tons) of equipment, is more than 90% complete.

Assuming a mid-year start-up and ramp-up during the second half of the year, Tullow estimates average production from TEN at 23,000 b/d.

At the Jubilee field, an investigation of theFPSO turret bearing has confirmed that it can no longer rotate as originally designed.

New operating procedures are therefore being introduced, including putting the vessel on “heading control,” involving use of tugs to minimize the vessel’s rotation, and revised offtake procedures, including use of a dynamically-positioned shuttle tanker and a storage tanker.

Sea water injection resumed on last weekend and offtake and production operations should re-start in the next few days.

A team is assessing the root cause of the problem and will determine the optimum design of the permanent solution for the Jubilee turret.

Uruguay’s government should shortly issue approval for Statoil to take a 35% interest from Tullow in offshore block 15.

Offshore Norway, Tullow’s next planned appraisal well is in July on the Rome prospect in license PL776.