Cooper declares Manta field off Australia can be commercial

Cooper Energy (ASX:COE) has re-assessed the potential of the Manta field in the Gippsland basin offshore southeast Australia. 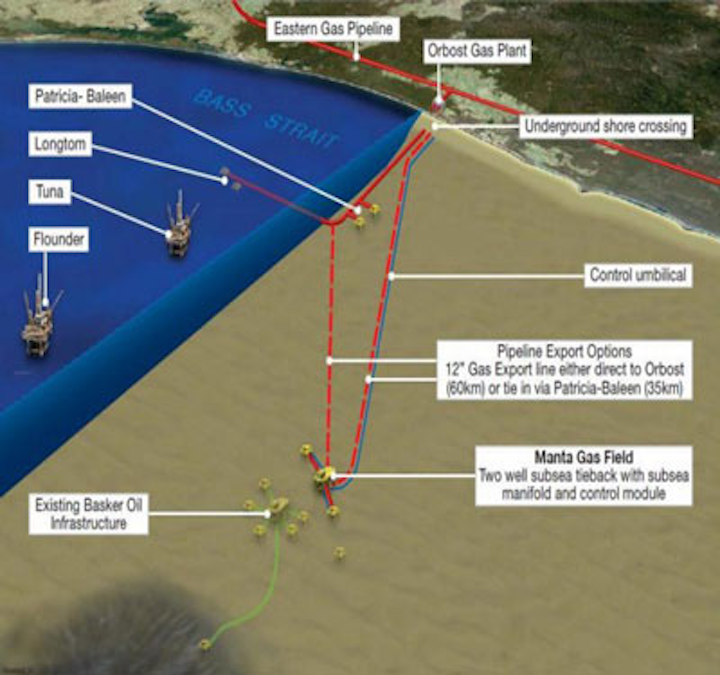 ADELAIDE, Australia – Cooper Energy (ASX:COE) has re-assessed the potential of the Manta field in the Gippsland basin offshore southeast Australia.

The field, which extends across permits VIC/L26 and VIC/L27, holds a potential contingent resource of 13.9 MMboe, the company claims, a 22% increase on the previous assessment issued in August last year, with a further 1.8 MMboe of prospective resources.

Cooper says development of the Manta gas resource is technically feasible, with a two-well subsea development as its preferred option for a low-operating cost project that can deliver first gas within two years of a final investment decision (FID).

Manta is 57 km (35 mi) offshore Victoria in water depths of around 130 m (426 ft). Concurrent to this review, the BMG partners (Cooper and Beach Energy) will progress planning for the potential Manta-3 appraisal well.

Production would be exported to the onshore Orbost gas plant. Cooper claims that Manta could supply 23 PJ/yr of gas for supply to eastern Australian gas users, with additional revenue from associated condensate production.

The previous partners in theBasker Manta Gummy (BMG fields) began producing oil from Manta and Basker in December 2006, with production ceasing in August 2010.

At that point 11 wells had been drilled, producing 8.6 MMboe of and gas liquids and 26.9 bcf of gas.

In the new scheme Cooper would drill one relatively low risk appraisal well, which could be retained for future production, plus one subsequent development well.

The company foresees synergies with the nearby offshoreSole gas field project, which is currently in the front-end engineering and design (FEED) stage.

If the Manta-3 appraisal well confirms the feasibility of the proposed gas export solution in late 2017, FEED would follow in early 2018, with FID around a year later, leading to first gas from around May 2021.