The sail-away and installation of the Alder project’s topsides module has been successfully completed, Chevron Upstream Europe has announced. 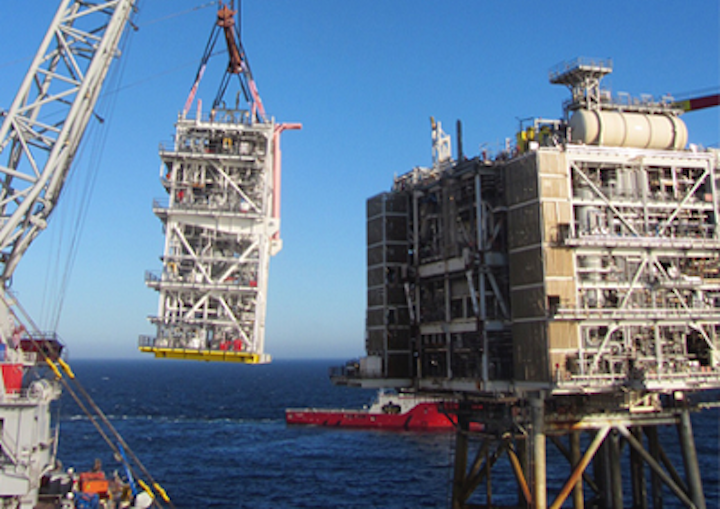 ABERDEEN, UK –The sail-away and installation of the Alder project’s topsides module has been successfully completed, Chevron Upstream Europe has announced.

The 800-metric ton (881-ton) topsides structure was built in a Newcastle shipyard and traveled via transport barge 110 mi (175 km) to the Firth of Forth. The module was transferred to theOleg Strashnov heavy-lift vessel, which set sail for the UK central North Sea. After arriving on location on June 29, the module was safely and successfully installed onto the Britannia bridge linked platform, where Alder-produced fluids will be processed following the offshore hook-up and commissioning campaign.

The Alder field will be developed via a single subsea welltied back to the existing Britannia platform via a 28 km (17 mi) pipeline. The Alder well is expected to be drilled in 2015 with the Blackford Dolphin, which is contracted to Chevron from mid-2015 for a multi-well program.

About 75% of the development work for Alder is being executed in the UK. Over the next six months, work will continue at a number of UK locations, including Aberdeen, Invergordon, Leeds, and Newcastle, on the key elements that will ultimately be brought together in the field to bring Alder’s hydrocarbons to production, some 40 years after its discovery.

The project has a planned design capacity of 110 MMcf/d of natural gas and 14,000 b/d of condensate.

First production is expected in 2016, and gas will be exported to the Scottish Area Gas Evacuation terminal at St. Fergus.